Hi everyone, I have some questions about the AI ​​of the OC henchmen and the henchmen of the official expansion modules.

I know about the OHS mod: ( OHS Henchman System | The Neverwinter Vault )

Do you know others?
Also, if I install both mods do they create conflicts or bugs that cannot be fixed with a quick use of the Cheat Console?
I currently have a couple of main mods installed:
CEP3 and PRC4.1.5.
Thanks for any replies.

I’m sorting my AI slowly but not ready yet heh. TonyK AI is a fine upgrade.

For grenades they’re treated as any other spell casting item for the purposes of the AI. You can attach other spells or add new grenade spells if you add them to spells.2da and, for the original AI, add in the right Category field.

I’m pretty sure the original grenades will be used by the default AI. They have a valid category. Just some henchmen don’t use spells much so it lowers the chances.

If you’re modding, Balkoth’s Minion Control is worth a look.

It makes companions more commandable, not more intelligent, of course.

P.S. if you use the latest x2 henchman scripts, opening inventory is automatic via radial menu. If you want conversation options, see, for example, dialogue henchman001 in my Enigma Island series.

So are you saying that in your opinion TonyK’s mod is better than OHS?
I’m looking for a mod that allows me to have full access to the henchmen inventory, does TonyK allow that?
I don’t find any videos anywhere, I would have liked to see, I just have to ask you about your gaming experience with these mods.
However I have attached several spells to the grenades, I am still trying them, but apparently the offensive spells work well.
I’m not sure if all defensive boost spells really work.
I have encountered problems with the Awaken (9) spell, it does not work, it does not boost the characteristics of the familiar.
I will also try with all the other spells, it will take a few hours and then I will let you all know.

Hey mate, thank you for your answer.
I don’t think I’m capable of using things like scripts yet.
How should I use this mod that you recommend to make it works in game, in modules such as those of the OC specifically.
Could you please explain the process in full? Thanks

Just found this other mod, I still don’t know if it’s packed with details like OHS, TonyK and Balkoth. 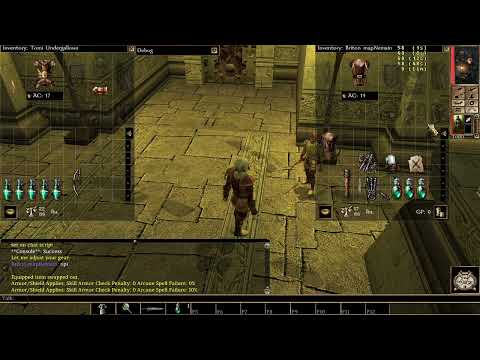 Yes you’ll want to have a mod to open the Wailing Death (OC) henchmen inventories. Note that also those are destroyed each level up…so be careful, it wasn’t made for it.

@Jasperre
What is it that gets destroyed upon leveling up? Which mod are you referring to with this answer? Thank you

If you try the video you posted, to get henchmen to open their inventories in the OC, the problem is every time you level up they get replaced with a new version a level higher. Is how the OC did “levelups”.

I mean, simple thing - just test it - apply that mod or whatever and then run into the OC module and grant yourself a few levels and hire Tomi and see what happens.

Ok thank you. I’ll try it and let you know what happens

I don’t think I’m capable of using things like scripts yet.

Ah, OK, I’d assumed you were, given the ambition to make new grenades.

Tony AI mod alone enables to open henchman inventories no problem. Tony AI mod itself improves enemies and your companions’ intelligence, behaviour and tactics while OHS gives you the ability to have larger and custom parties. However, both mods can’t function together so you have to choose only one

Thank you very much. Are there other mods like OHS that allow you to have other mates in the party? In OHS I think I have read that you can add characters created by you to the party, very interesting this thing. Are there any other mods that work like this? Or at least is there a way to make the two mods compatible?

I did Wish for dozens of years for that compatibility but unfortunately, I couldn’t get both. I always wanted to experience the ultimate gameplay and push limits out of this game and tried many mods around the vault. Long story short, the NWN1 is pretty complicated for this just to get straight what you want. I always wanted to have more than 1 henchman in the party, control henchmen, make henchmen mart and intelligent, watch AI bosses fight each other, recreate huge battles from DnD lore via the editor, enable AI on my own character and so on.

Regarding AI as smartness boost - Tony AI. The problem with it is that is heavily outdated and it was never fully finished, there are a lot of bugs, but from my experience, this is probably the best what you can get now. There is an upcoming new AI of Jasspere that I’m personally waiting for for years and only will install the game again after the new AI will be released because even Tony’s AI doesn’t provide a nice gaming experience, especially with different modules than OC/SOU/HOTU.

Regarding more henchmen in the party - by default, only OHS mod gives you that ability but takes away Tony AI. The closest you can get to get both mods I found only a partial workaround. It allows you to get more than 1 henchman but only if they are already made for modules. That means you can’t create a companion and make a custom party like in NWN2 but allow you to recruit companions if you can reach them, for example in OC you can hire all 6 companions in ACT1. However, they disappear at ACT2 but you can recruit them again at ACT2. Lilith game editor You can play around with this tool, there is a function somewhere in the menu to increase henchmen limit in-game. There is an option to duplicate any NPC or PC as a copy to be in your party or make as an enemy.

These are general bug fixes and improvements of the game as well as AI too.

These are fixes and improvements of the game in many aspects it also has OHS compatibility to some degree. Be aware it is old as the universe and compatibility as the whole are questionable…

Many various tools to play around one of them are Numos’ Minion Command Tool where you can directly control companions and they attack enemies on sight, so as a wiz/soc you can finally tell your barbarian or paladin to go first through the dangerous dungeon doors!!! And these tools are override.

Tutorial on how to put AI on your own character to make it fight for you. Here is a new and faster way to do so (Script is in the first post)

All of these are not willing to work together… I made myself a lot of workarounds and took only some parts of the mods and configured by myself exactly how I want without unnecessary stuff that I don’t like so technically it is possible but takes a long time of testing and I no longer have a game installed. But feel free to ask anything maybe I could help you make things work.

Yeah the multiple henchman thing needs some changes to modules, is a bit of a pain in the arse. I’ll be looking at it eventually, but initial AI release will only make the AI better, hopefully, rather than edit core stuff. Not that scripts can’t work around it…

Thank you very much for all the clarifications, demoix, I really appreciate your help and the effort you put into explaining everything in detail to me / us, NWN modding novices.
Now I’ll have to carefully study each of these mods and find the one that’s right for me.
I think I consider two fundamental mods: TonyK, or OHS.
If I choose OHS, I will try to install it with this other mod ( NWN1 Player Utilities | The Neverwinter Vault ) which tries to allow to open the inventory of the henchman, hoping that it will allow me to do so even when in the party I have more than one henchman, allowing me to open inventory of each of them.
But I admit that I still haven’t thoroughly examined the other mods you suggested, maybe among those there will be some that help me better than TonyK or OHS. You have given me many different possibilities, so I will have to study them well and think about them carefully.
I love Lilith Game Editor and thanks for sharing it with me, I will definitely try it (along with TonyK mods or OHS if possible, but OHS would become superfluous if with Lilith I can get more henchmen)

One thing I was wondering, in response to some of these mods you showed me.
I would like to know if with the official Toolset I can modify the official OC henchmen, because if I can do that, then I don’t need OHS.

Anyway, I’m almost done creating the new grenades, I’ve tested a few to see if they work and for now they work.
So far I’ve created 49, but I’ve only gotten to the letter “P” of the Cast Spell list in Available Properties, so I think at least 60 or more will come up, for all tastes.
I have other questions to ask on simpler issues than the ones I put in this topic, I will ask another topic to understand how I can solve these two new doubts.
Being simple I’m sure you know the answer, my dream for now is to be able to publish a mod or something like that, to get you these grenades so you can download them from the Vault.

Hopefully, you will get what you want. I just going to simplify things more and make it separate:

OHS - will give you CUSTOM parties. Still not ideal, because you can’t level them up exactly how you want. NPC uses default pre-set feats and spells.

Lilith - will give you an increased size in the party so you can recruit more henchmen IF they are available on the module. + gives you the option to open inventory (not 100% as I can’t check but I think it was possible). + You can add any NPC from the module to your party or make duplicates, however, they won’t level up in this case.

Conclusion: So as far I understand you are most interested in opening henchman inventories and getting more henchmen at parties. My suggestion would be to go with Lilith and Tony AI. They are compatible. There are 3 functions from Lilith doll, one of them you click on NPC and add it to your party. Also should be an option to open its inventory. Part of that you will get Tony AI working. If you struggling setting up or missing in context let me know. I was using Lilith all my life, it was a great tool to play around with.

Very important if you want to install Lilith, remove file called plc_u02.mdl from it’s folder. This file prevents looting corpses at all.

Thanks demoix, this further clarification has helped me a lot. I will certainly do as you advised me, I will use Lilith and TonyK AI. Thank you very much for your time with me