How do you make a UTI?

I got asked about my armour swap and whether it can be used to override other mods but the problem is NWN2 armour has added bits like shoulder pads which clash with my swap. I had to remove them all when I made my mod and blueprint all the armours I used.

So could you change all the original armour to have no addons like shoulder pads and then make UTIs of each with the same number as the original, stick them in your override and wipe out this problem ? If so how ?

I’ve often wondered similar things. Whenever I make a new armor that is supposed to be like a half-plate or something like that, the game (or toolset) always adds shoulder pads and whatnot, destroying the overall look of the armor. Maybe there’s some way around this, but I haven’t found it. I usually just do them as “cloth” instead of some other armor, 'cause then they look exactly like the custom armour mdb files.

andgalf… If you actually want the armour to be used and offer it’s protection according to the rules remove all the add ons in the armor set tab of properties ( set them to 0 ), give it a new tag and reference number and make it into a blueprint. Then you can equip it via the inventory.

The problem comes with stores or creatures dropping things. You have to put that new blueprint everywhere else too.

There has to be a way to override the addons, some of them are pretty ridiculous anyway. That’s why I figured it’s in the UTI thing, I couldn’t find it in the 2da ( which would be nice and easy ).

ps. Isn’t a UTI a urinary tract infection ? I don’t want to be able to make them !

i have scant intuition for this, but i know a bit … 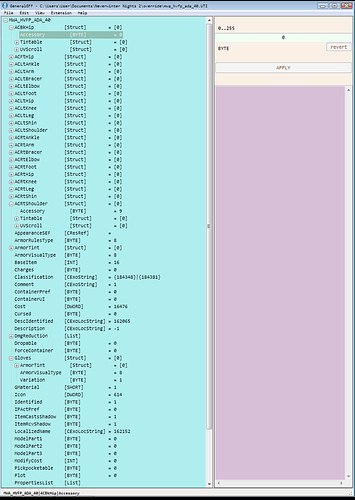 things to note are that an armor is made up of AC* entries, each with reference to an Accessory, a variant of which might be None or Invisible in the toolset (idk)

and there are also add-ons, like Gloves (shown in the Adamantine Full Plate UTI). the possible add-ons are

I think @Lance_Botelle has done a fair bit of armor-visual tweaking, and @4760 and @rjshae probly know a fair bit also …

There has to be a way to override the addons, some of them are pretty ridiculous anyway. That’s why I figured it’s in the UTI thing, I couldn’t find it in the 2da ( which would be nice and easy ).

well, an armor’s blueprint can be copied to override and tweaked. If you give it the same filename/resref then any time that particular armor is created in the game it will of course be the tweaked armor. The issue I suppose is that most armor that players find in a game were placed there (instanced or pre-placed) and are not newly created (eg. on NPCs). And it would be tedious to run scripts that find and replace such armors …

i don’t know what this means →

I don’t know what “armour swap” is or what “other mods” are doing … sry. Am just here with the basics of what an armor’s UTI file looks like …

kevL-s… I renamed a lot of custom armour MDBs for armour to the original NWN2 names but inside the MDBs were custom armour textures, hence I swapped the armour. But this meant making sure all the armour I put in my mod had no shoulder pads, bracers etc. because it didn’t look right.

I removed them manually then made a blueprint and equipped people via the inventory. If a bandit had +1 leather on straight from the toolset it would have armour accessories so I got some +1 leather removed all the bracers and knee pads then renamed it as a new blueprint and gave him that. I’m not talking about gloves, boots hats etc. Just the extra bits of armour.

So my armour swappng mdbs and textures are useless in something like the OC because it uses templates for armour that have shoulder pads and other accessories. But if I could alter the templates of the NWN2 armour, keeping exactly the same names and put those in my override no armour would have accessories and the swap would look like it should.

But how do I do that ? I can only open a UTI with notepad and it is totally incomprehensible nonsense and nothing like your example.

If I could grab all the armour UTIs open them and replace all the accessory numbers with a 0 then save it in my override I think that would do it. You can see in your example that right shoulder pad has a dropdown with byte 9. That is the accessory number of that armour part in the toolset so do I just have to change that to a zero ?

Yes, exactly. You can open the .uti in the toolset of course, and in the properties go the farthest right tab: 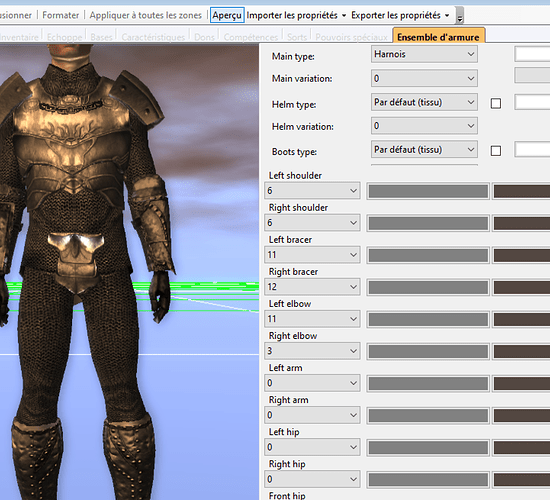 an armor is made up of AC* entries

tlkedit can also open the .uti files, just look for the AC* entries and correct them.

However in both cases it’s done manually, blueprint by blueprint… Not sure how to do it by batch.

4760… Thanks I’ll investigate opening the actual UTI files and manually removing every single accessory for all the vanilla armour available.

OK I copied an armour UTI into my override, got the file open and swapped all the accessory numbers to zero then saved it. I opened up the toolset and it works but, and it’s a big but !

I now have two exactly the same armour files available. One is the original and one is my version so the override doesn’t override it. All it does is creates a new available item !

So my armour swappng mdbs and textures are useless in something like the OC because it uses templates for armour that have shoulder pads and other accessories.

wait. That’s the biggest problem here. (unless im totally mistaken) yes they use templates but only in that those templates/blueprints (not exactly the same but for our purposes at present lets say they are) have already been “instanced”. That means that armors that appear on NPCs, eg. and many/all that are in NPCs’ inventories to be dropped, etc etc in the OC, eg … they are already a done deal.

tbh it depends on the module design. There are two ways:
- pre-placed instances of (eg) NPCs (ie, paint them down in the toolset area)
- create fresh instances on the fly, as the game progresses (usually in OnEnter scripts)

The second way allows your modified overrides to work. The first doesn’t, and I believe that much if not most stuff in the OC (as just one example) is the first …

But if I could alter the templates of the NWN2 armour, keeping exactly the same names and put those in my override no armour would have accessories and the swap would look like it should.

now … this being bits and bytes and all that progamming stuff ofc there’s ways to do it … but someone would have to be right into it and be ready to fudge with it for however long it takes,

Thanks and Oh dear that’s screwed my plans ! I understand now it’s not going to happen, it was just a thought.

I thought the game loaded modules differently so if I placed a bandit with his +1 shoulder padded standard leather armour in an area it didn’t matter because when the area loaded and the computer wanted to put him there it would check his inventory say “ah yes this bandit needs +1 leather armour” and put the +1 leather armour from the override on him.

I’m going to go and shoot people in Cyberpunk now !

I understand now it’s not going to happen, it was just a thought.

You’ll still have to open every module, but with Powerbar (I think) you can update all instances of any given blueprint, even if already equipped: 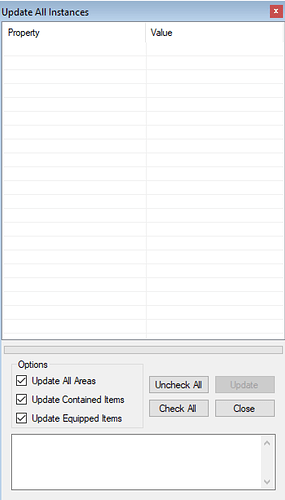 @4760 yes that is what the template is used for (as opposed to a blueprint).

I’ve never done it before and can’t vouch for it … but hey, be my guest :)

@Tsongo this is the GIT file for the Docks in the OC. I’ve highlighted the City Watchman (one of them…) you can see that he already has his ‘equipment’ on his instance. 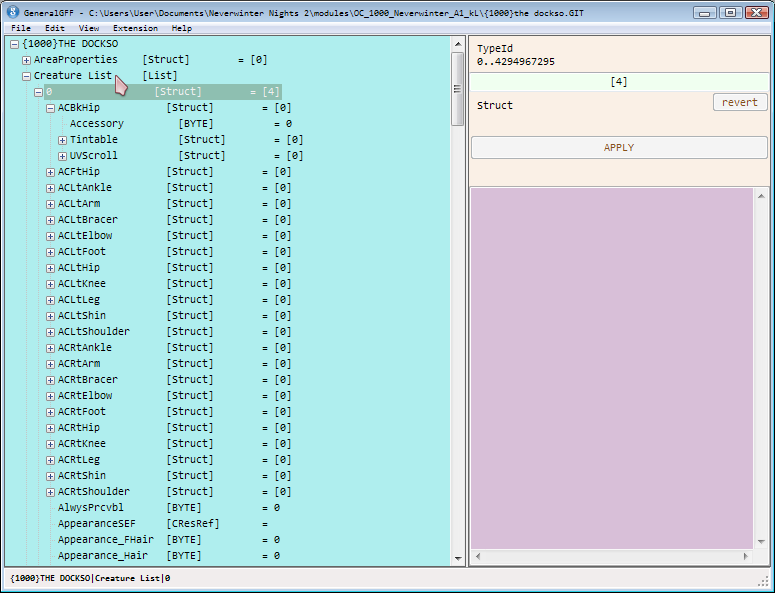 There are 65 pre-placed creatures in the Docks alone …

ps. Im not sure how MDBs relate to this; I guess that MDBs will be overridden on the fly (unlike pre-placed UTIs, UTCs, etc) …

But that’s assuming the tags are the same.

and/or that their template resrefs have all been properly assigned …

even so, the GIT files of the OC would then have to be redistributed … strikes me as an ungood idea … would be better to try it by script in each module’s or area’s OnEnter … but like i said, tedious … tedious just to think about :\

4760 and KevL_s… Thanks I thought the override ruled everything but obviously not and all this is way beyond me and would finish up with me reinstalling NWN2 because I wrecked it !

Maybe there is a sneaky way and that is to make all armour bits invisible. One MDB with invisible or non existant textures cloned for every single option. Then it wouldn’t matter who had them because they don’t exist. Then again it might finish up with people covered in red cubes saying missing texture or with question marks on them !

Feel free to tell me I’m being ridiculous and have absolutely no idea what I’m talking about because it’s true !