How hard could it be - conversation GUI

In the conversation generation GUI in the toolset the box at the bottom allows us to set camera and speaker etc. Even at the highest resolution half the options are lost unless the box is expanded to the point is starts to take up most of the text area which, i personally, like to see to check links and the conversation flow.

How hard would it be to change the order that items appear in the list for me I would like speaker and listener at the top then the camera box. the rest I don’t use and I’m not sure anyone does?

I don’t know if this is a GUI change or just a change to the list?

I’ll go out on a limb and suggest that’s hardcoded in the toolset-executable.

If it’s not hardcoded, but it may as well be. There’s metadata for those fields stored in the dialog file, but if you change the metadata (using notepad++ for instance) the toolset will crash. Also even if that worked you’d have to do it manually for every dialog, or write a program to batch change the dialogs.

You would probably be making a Toolset plugin to accomplish this - overriding the UI that handles conversations. Very doable - how is your C#? 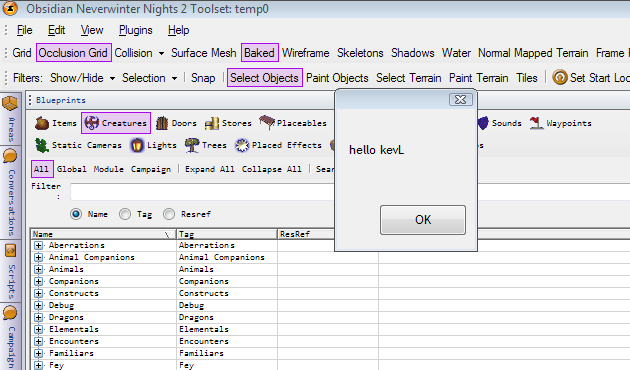 before anyone gets too excited that’s a far cry from manipulating existing assets. There’s at least a few things I’d like to change about the way the TS operates … but it seems, like Trinital suggests, that rather than modifying what’s already there (think : real source code) a brand spankin’ new ConversationEditor could possibly be created and used in place of the existing editor. That’d be a job, i imagine

more realistically, would like to get my fingers on CodePoetz source for the PowerBar …

It’s outside of my skill set me thinks. Back to work …

for further info - basics for plugin creation can be found at