How to alter filepath to saved modules folder for game

I’m working on an iMac and have downloaded the dev build onto my partition to try it out. Unfortunately I recently had to delete a lot of stuff from my iCloud as it was approaching fullness !. Anyway, …

When deleting the stuff I must have screwed up something because although the toolset works perfectly and the game opens it only offers me the original campaign and the four other “premium ?” modules - To heir is human etc.

I reckon the file path to the modules folder has been altered and I need to know how to change it back so it reverts to documents/modules.

I know that in the past you altered the ini file and that now it is supposed to be in the settings.tml file but that is one frightening looking file and I can’t find anything that resembles the old ini lines where the file path for haks modules etc is laid out simply using /.

Can anyone point me in the right direction on this? I’m guessing the settings file for the mac isn’t any different from the Windows one.

Having spent some time looking I can’t find anywhere in the new settings file which deals with file paths so I’m guessing it’s still drawing these from the .ini file. Having downloaded the dev build and comparing .ini files there seem to be two changes from my current ini file.

Are these what you see on Windows and are they different from before?

On Windows, the paths are still in nwn.ini, as before.

They do refer to C: and backslash, but they always did, as that is the correct default for Windows.

I have seen multiple reports of save files vanishing, so what you’re seeing is a likely cause.

Does correcting nwn.ini fix the problem?

Thanks. No, it’s not just saved files. It cant seem to find anything in my modules folder. If I select a new module at game startup none of my toolset made modules appear. however, I only changed the file path to the modules folder. I didn’t want to waste time changing them all if that wasn’t the answer. Would that one line change be enough to find the modules if the path was correct?

Screenshot below. Taken name out and don’t worry that module line name seems longer. Was just trying something else. 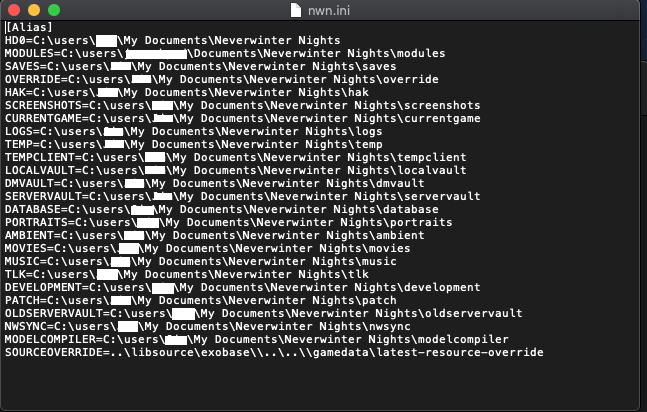 Yes, changing the modules line would be enough to prove the solution, if the toolset then loads your modules.

Then you’d need to change all the others (preferably as one action, using Replace All in Notepad++ or whatever).

I’d expect the issue to affect all file types - the only reason saves comes up often is because that’s the one all players use.

After MUCH mucking about I have finally got the new build working properly on my Mac’s partition. It required the following changes to the .ini

Now to see how it looks.

Hmm, spoke too quickly. That gets all the toolset modules I’ve made appearing at least but it can’t “unpack” any of them

UPDATE: Just in case anyone is using game on a Mac I’ve also had to remove then “My” from “My Documents” in the .ini. Now modules opening fine. Surprised nobody else has had that problem here or on Beamdog/Steam.