So i have over 1000 custom portraits in portrait folder ( 5x1000 aka around 5000 files ).
I would like to change my party members portraits.
I tried nwn toolset and nwn explorer, but i am at a loss where exactly companions are hidden.
Thanks for the info,
Cheers,

The campaign plot character portraits have their own section in the portrait selection screen. 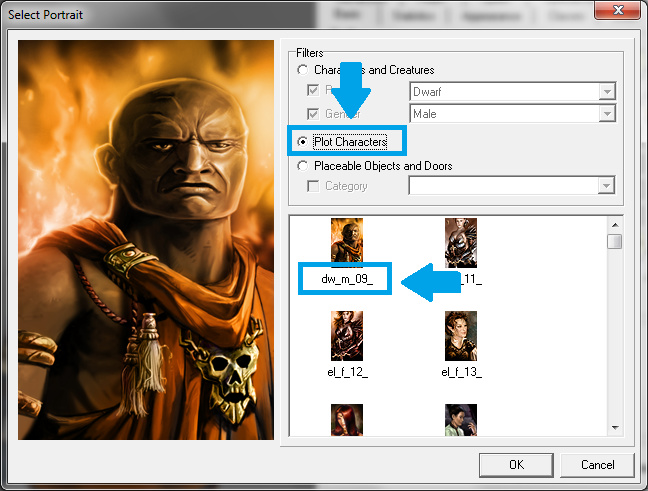 Once you know the portrait name, you can extract it with the Explorer. Alter it as you please, then attach it as a patch hak to make sure it can’t be overridden by the texture patch. That should be all there is to it.


If it’s not a plot character portrait, I’d try finding the companion character in the toolset. The name of their portait will be in their properties. 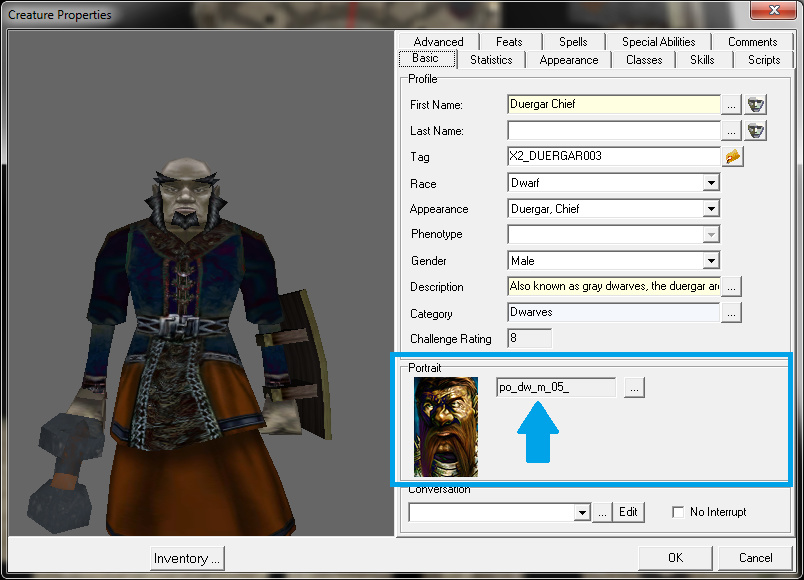 It’s also possible for a portrait to be set via scripting, in custom modules. ::headscratch:: In those cases, options include searching for and finding the script where the portrait-change takes place, or writing a quick custom script to make nearby creatures speak the name of their portrait.

First question regarding main campaign. How do i open it ? When i try to open a module i do not have option to open official bioware campaigns aka main game and expansions.
Second questions. It is about custom modules. The companion characters are located in the areas section ? Or somewhere else ?
Sorry i am new to the nwn modding.
Thanks for the info,

One additional thing.
How can i export portrait using nwn explorer ?

You shouldn’t have to open the main campaigns in order to have access to the portrait files. They’ve become default game assets, which you should be able to view from any module.

To make the campaign modules accessible prior to having completed them ingame, though, you can add some codes to nwnplayer.ini under the [Game Options] section. nwnplayer.ini should be in your main NWN installation folder, or in the My Documents one, depending on which NWN you’ve got.


In custom modules, it’s trickier, because it all depends on how the author set the companion up, which they could’ve done in a multitude of ways. :x They could have put down a blueprint creature and modified it afterwards. Two reasonable places to check are the Creatures list in the area in which you first met the companion in the module (left), and the Creature Blueprints (right). 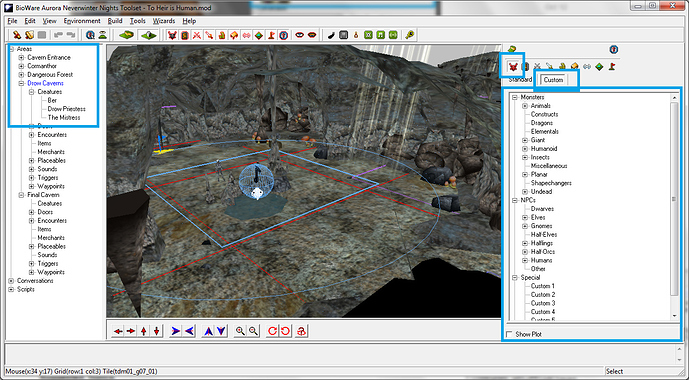 ( don’t apologize for not knowing things you have no way of knowing!

secretly, none of us can live up to that standard <3 )

One additional thing.
How can i export portrait using nwn explorer ?

If there is a blueprint of the companion, the blueprint will be an .utc file, in NWN User Modules -> (Module Name) -> Blueprint, Creatures.

Otherwise, there should be an entry for the creature in the .git file for that area, too. NWN User Modules -> (Module Name) -> Area Data.

Checking up on it, they both point to the row number of the portrait in portraits.2da, though, so it’d be an extra step for finding the portrait name to look.

You’d need to check whether the module has a modified portraits.2da, and look up the row number in it.

Why it such pain in the ass to change a portrait.

Cosmic conspiracy to ensure that we’ll never get bored.

Which file are you right-clicking when Export as TGA is greyed out? It’s normally greyed out for non-image filetypes for me, too, like if I tried to do it on the area data ones.

Odd about the crashing.

I’ve opened a few creature entries like that one, but I’m not getting a crash so far.

Yes, i know the name.
It is po_hu_f_23_ .
The only file with that name is located in leto character editor. 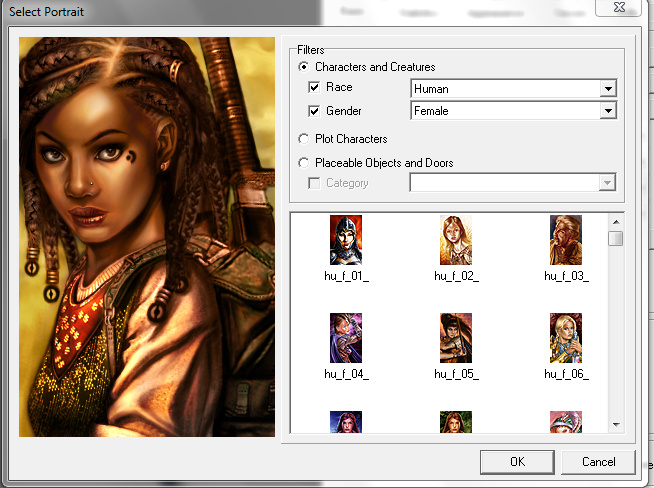 My question is how do i change it do my custom portrait.
Do i have to export hak files to do it ?
You mentioned the 2da file, the portrait.2da.
Where exactly it is located ? 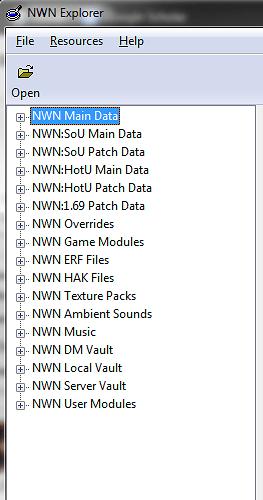 Left-click the NWN Main Data entry, to set the starting position of the file search to the top.

Then, hit CTRL+S, and type the name of the portrait you’re searching for. In this case, po_hu_f_23_. Hit Enter. 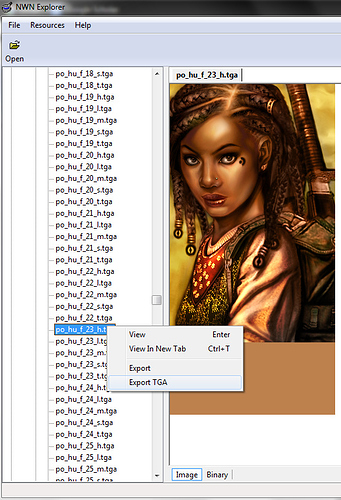 Now, that one, you should be able to export.

Now you can grab your image editor of choice and draw all over it, if you like. Once you’ve done that, you’re, yes, going to need to either reattach it to the module in a hak, or install it as a patch hak or via the override folder.


But if you don’t need the original portrait itself, then you actually just need to know the name of the file you’re replacing, so you’ve already got that. If you set up a new 512x256 image file and save it under the same name as the portrait you’re replacing, that’ll do the trick, too.

Ok, i exported the portraits,2da.
Do i need to replace the entry of po_hu_f_23_ to adelaide for example ?
Or should i do something additional ?

So basically i can just put tga files in the override folder and that would do the trick ?

Ok, i exported the portraits,2da.
Do i need to replace the entry of po_hu_f_23_ to adelaide for example ?
Or should i do something additional ?

Creature objects can be linking to rows in the portraits.da, yes, which means that if you alter the data in a row in portraits.2da, all creatures that use the data in that row number will be affected by the changes. It’s also a way to change portraits, sure.

So basically i can just put tga files in the override folder and that would do the trick ?

The load order of the game files is IIRC something like “Game files -> Override folder -> Patch haks -> Module haks”. If a custom module has, for example, a modified version of po_hu_f_23_ in it’s module haks, then that modification would override yours.

Try modifying the tgas of the portraits and chuck them into your override folder, then restart the game, and see what happens.

One thing before i try this.
Why people are always saying not to put anything in the override folder ?

Huh. I don’t think I’ve heard that one before.

Arguments I could think of:

It could be a multiplayer thing, too.

I don’t actually know how the override folder plays together with PWs.

The alternative to the override folder is using patch haks, which means that you make a custom hak, put it in the patch folder, and add an entry to nwnpatch.ini so that your patch hak will be loaded on game start.