How to have an Animation where PC is holding something

During a crafting conversation, I assign an animation to the PC as though he/she is pounding on the anvil (EffectVisualEffect(VFX_FNF_CRAFT_BLACKSMITH))
It looks fine and works, but can I also fake a hammer in their hand?
Hammer weapons fall under martial not all will have that proficiency.
I guess I can’t spawn one in inventory, equip, then destroy it afterwards. Plus that would unequip their equipped weapon, and require me to remember the equipped gear prior to unequipping, then re-equip.
Maybe I just leave the PC to swing at a 500lb anvil with nothing but the fist?

Hammer weapons fall under martial not all will have that proficiency.

You can add the proficiency to the weapon itself, so it’s useable by anyone.

You can try and use this: 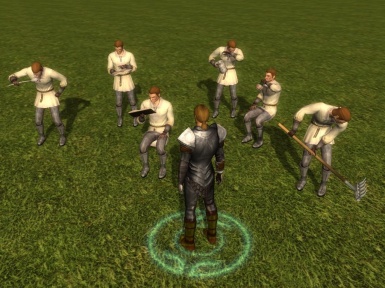 Visual effects that put various items into a creature's hands without the need to spawn or equip items.

To quote the description:

"Visual effects that put various items into a creature’s hands
without the need to spawn or equip items.

Thank you for the help, I’m glad there’s a vfx for it.
I did mess with equipping the hammer, unequipping, etc but I like the vfx better.
Thank you!