How to make custom dynamic races

I would like to make custom races with changeable body and armor parts instead of using static creature models. Can anyone point me in the right direction? I’ve tried renaming MDL and PTL files (1000 at a time, manually) from “pmhxxxxx” to “pfhxxxxx” only to run into invalid metallic looking male shaped textures on a female character. I can’t seem to find a good application for viewing/editing these files.

There’s a few steps to it but not very complicated. I point you to the Custom Content Guide v3.0 by Eligio_Sacateca, It’s dated but still accurate. You’ll want the section about creating the wemic dynamic model… This will put you on track. Good Luck !

I have just started this myself and I’m almost done with the Warforged. On discord Acidchalk has made like 20+ dynamic races if you get stuck you could try asking him. I’ve been bugging him like mad myself.

Also here is a guide:
https://neverwintervault.org/project/nwnee/other/custom-races-sample

One minor update to the Custom Content Guide - renaming models can be even easier using the NWN Model Renamer tool (or, with a trivial element of risk, a good text editor).

It’s not enough to rename the models - you need a tool that changes all the internal references, too. 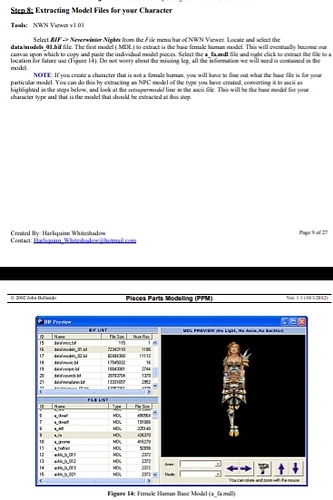 Sounds like a very old tutorial - I don’t think NWN Viewer has been usable for many years.

You’d be better off with the Custom Content Guide.

That does have broken links to the old vault, but you can find the utilities mentioned by searching the new vault.

Okay so I took a look at that, and now I can’t get NWNMdlCompiler to work. I found this:

So I have to reinstall NWN and run critical rebuild in order to fix my registry keys? Isn’t that not supposed to be used with Enhanced Edition? I guess it’s not clear what the solution is.

I was really puzzled by that thread, as I can’t imagine why a Command Prompt tool like nwnmdlcomp would need registry entries. Did you try the solution I mentioned there?

You’re right - Critical Rebuild is not for use with EE. Perhaps TAD reinstalled and rebuilt 1.69 on the same machine (which is OK) but maybe it was fortuitous that the compiler worked after that?

I found a new version of NWNMDLcompiler here:

There are a lot of resources and links by many different people floating around, and those that have been around NWN for a long time or never left might take knowing where to find it all for granted.

This one works having followed the instructions here, but is the broken version:

That file renamer tool is going to be very handy. My next question is: Is there a way to export multiple files at a time with NWN Explorer?

Hello again. I’m having trouble making a dynamic satyr using gmax. I’ve spent the last three days coming up with two different methods of doing it, neither of which is perfect. Each one has its pros and cons.

Method 1:
Step 1: Import c_satyrwarrior.mdl with the top half of its skin mesh cut off (right click and select convert to>convert to editable mesh). Then import the base player nodes (pmh0.mdl) minus the pelvis, thigh, shin, and foot nodes.
Step 2: Delete the square at the bottom labeled pmh0. Then link handconjure, head conjure, and any nodes without a parent to the original base c_satyrwarrior.
Pros and Cons: As you can see there are unused parts floating around. I can’t delete them without undesirable effects such as missing body parts, and ruined leg animations. Otherwise all animations work great. The human body parts are spaced improperly, but that seems like a minor issue. However the remaining satyr parts (which are invisible) are a cause for concern, because I don’t want the model to cause any game crashing. 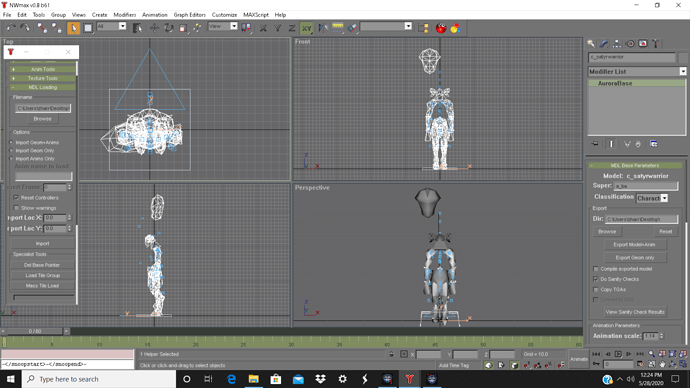 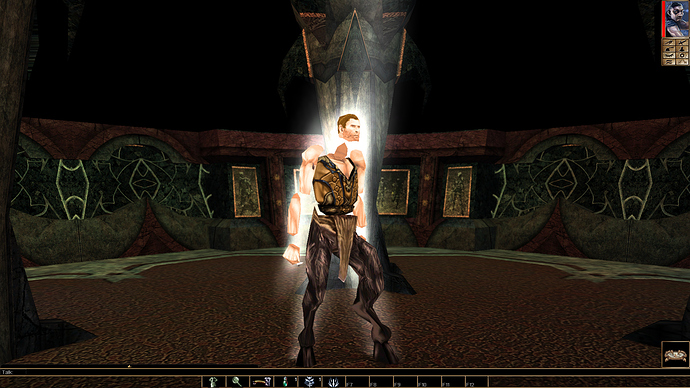 Method 2:
Step 1: Import c_satyrwarrior.mdl. Delete the arms, neck, head and upper body skin mesh. Weld the skin mesh using the Attach button, and by increasing the weld threshold to 30. Delete all nodes. Then import the base player nodes (pmh0.mdl) as above.
Step 2: Delete the square at the bottom labeled pmh0. Delete the second rootdummy node. Connect the nodes that were connected to the second rootdummy node to the original satyr warrior rootdummy node. Then link handconjure, headconjure, and the skin mesh to the c_satyrwarrior base.
Step 3: Click the c_satyrwarrior base and use Nwmax (on the left side). Press the “Order Children” button. Set the skin mesh to the top of the list.
Pros and Cons: No extraneous satyr parts remain. The human body parts are arranged as they’re supposed to be. However the legs are not animated. 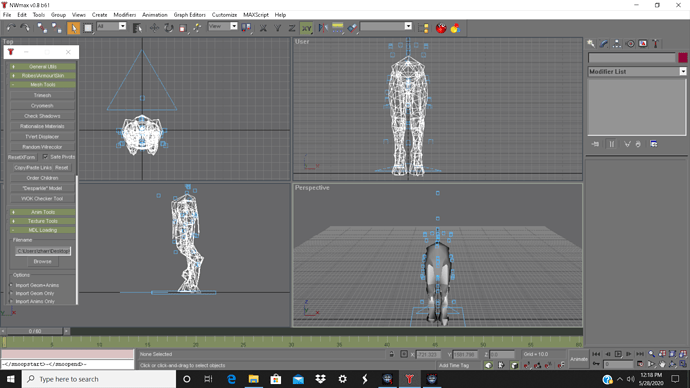 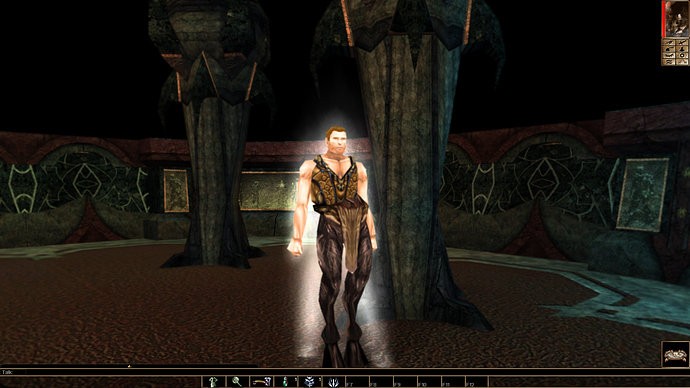 Does anyone know what I’m doing wrong? I’d prefer the second method if I can get it to work. Again, I don’t want to leave extra satyr parts in my model. I just need to figure out how to get these legs moving.

I decided to go with method 1. It was easier to substitute half orc parts than to try and work out kinks with skin mesh. The only bug so far is that the legs become permanently textured if Barkskin is used. I did a test with the Wemic and the same thing happened. Can anyone shed light onto that? It hasn’t caused any crashes so far. According to my research the old dynamic races caused game crashing (https://neverwintervault.org/forums/neverwinter-nights-1/nwn1-tech-qs/your-nwn-client-crashing-lot-try-first). Does anyone know why that was exactly? Also will it be possible to get these guys to ride horses?

I’ll upload it to the vault after some polishing. 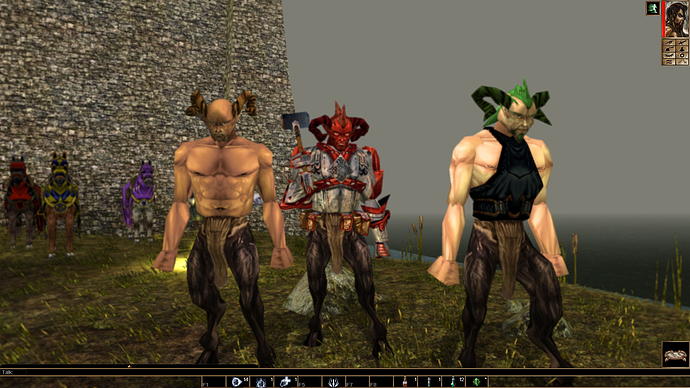 Horse riding should work. You will need custom models for the mounted phenotypes and mount / dismount animations (based on half-orc). The mounted posture might need tweaking to look right, as the legs are an unusual shape.

Here’s a list of the variables that can be set in the horse system to facilitate this.

Not sure about the barkskin or crashing issues.

oh wow i just saw this thread or i would have helped out! Good work on those! only thing i would have done different is slice up the legs and not use the skin mesh cause they get buggy

Alright so the female Satyr is complete (with two custom horned heads) and I’ve been reworking the old dynamic illithid. One thing all these custom races have in common is the lack of a verbal component for spells. What gives? 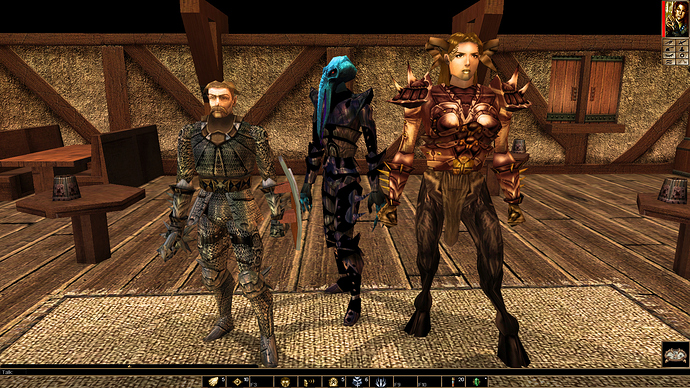 One thing all these custom races have in common is the lack of a verbal component for spells. What gives?

Illithid can’t speak so they’d need it, and Satyr are intrinsically magical, being Fey and all, so could be tied to that

Super loving what you’re doing with these though. More custom characters is a thing for me, and heck knows I’ve been pondering a private update for the Half Ogres to 1.69 for a bit along with maybe something for minotaurs (but never get around to it as, time)

You could turn these into minotaur, all you would need is a few minotaur heads. In any case, here they are! I included some CEP parts and riding phenotypes. I also fixed a problem with the legs in which a vertex would move incorrectly when the torso moved.

And here’s the Illithid. Lemme know if you’re using them I’ll come play on your server

I had the same problem with verbal sounds when casting spells for a custom drow race I made for a module. Didn’t create any custom appearance, it was just 2da editing. I’m wondering if there was a column in the race.2da file that I missed that addresses that? Did the edit years ago.

Just letting you all know that I updated the Dynamic Satyr. I increased the detail for the female model and made some other minor fixes.