Is there a way to remove those annoying pop-ups (“Do you wish to save your game first?/Exit to main menu?/Exit to deskop?”) that show up whenever I’m trying to load game, exit to main menu/exit game? I’ve checked GUI files that are responsible for in game loading and options menu - loadgamescreenx2.xml, optionsmenu.xml, mainmenux2.xml - and there isn’t any part of the code that would be responsible for those pop-ups. Could it be that this window (on loading menu) is showing up through completely separate xml file and the script fires both pop-up and loading menu at once? Can this be dealt with by altering GUI files alone or the scripts have to be changed?

And the second issue I have I’m unable to locate xml file that is responsible for this GUI in SoZ: 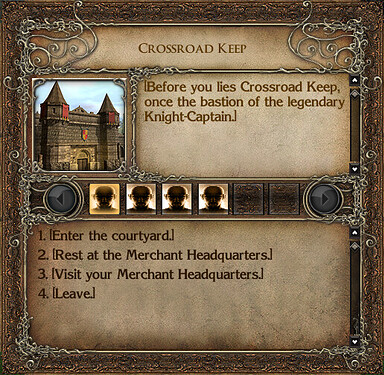 That is a conversation dialog.

i think the UI for it is partychat_ol.xml

as for bypassing confirmations… i tried never could

Thanks. It really is just party chat, I’ve got confused because sometimes game displays this graphic and sometime it uses the one from Tchos UI and it is strange it isn’t consistent… E.g. whenever I will load one save it shows the graphic above but if I load different save and speak with an npc then load previous save the graphic from Tchos UI shows up…

odd… have you checked your /override + /ui folders for duplicate files?

there are plenty of duplicate file checking apps available

Definitely no duplicates. Seems to me that game is reading from partychat_ol.xml on first approach to cities and settlements during gameplay. Then if you talk to an NPC it switches to partychat.xml for both NPC and dialogues on the main soz map. Hance this default GUI since my partychat_ol.xml file was unmodified. It stay this way even after loading save and resets back when turning the game off.

Because right now it only show “+” constantly. It is a button used in dmchooser tool.

A UIFrame contained within a button must have a state
attribute that only applies when specifically contained within a button. The
following arguments are valid for the state attribute:
up
down
disabled
focused
hilited
hifocus
header
hiheader
downheader
base
These states can mean different things depending on the context of the button,
so I’ll just make some notes about a few of them. ‘header’, ‘hiheader’, and
‘downheader’ are the states for a button that is to be the header of a
UICollapsable object, which will be explained further in a later article. ‘base’
is useful for when using state frames that leave some of the ‘base’ button
visible, such as hotbar button icons.

other than that I just fool around until something works… or doesn’t :\