I found a Xorn!

Well, a Xorn polymorphed into a goblin…

The party was feeling pretty good about themselves after: speaking with Ulip, striking a deal to help out Glek, meeting a comrade and future resident of Crossroad Keep, taking an artifact to a dryad, obtaining exonerating evidence, cleansing Duskwood, and coming to a final agreement with Glek (from the party’s point of view).

As the party moved towards the exit, Ulip and the boys were upset and were dealt with quickly by the party. With the way apparently clear, the exhausted party was in good spirits for they all knew they had put in a good and honest days work. The party began to follow the PC toward home with great anticipation for seeing their many friends in Port LLast, as well as Marcus in Neverwinter.

Suddenly, the PC noticed the other party members becoming agitated as the sound of magic could be heard not far away. No creature could be found. Suddenly, the PC was being injured by an unseen force. The Ranger found tracks and was able to deduce that the party was under attack by a magic wielding Xorn located within the wall of the cave. None could see the Xorn, but Sand was able to take down the Xorn unseen.

(“Goblin Barely Injured” is where the cursor is hovering over the goblin. The cursor is not rendered using the in-game screenshot utility)

Notice the orange target on the mini-map, due to the ranger actively tracking the Xorn/Goblin. 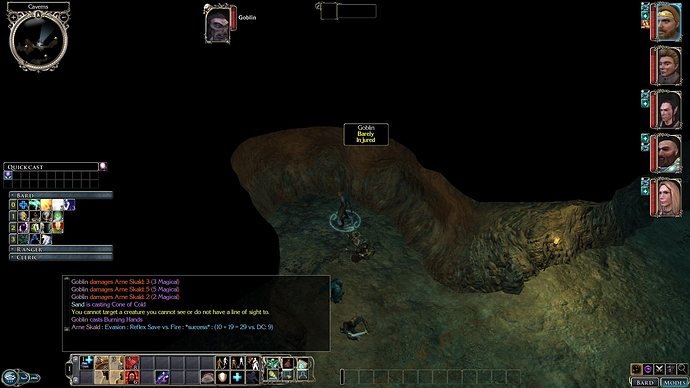 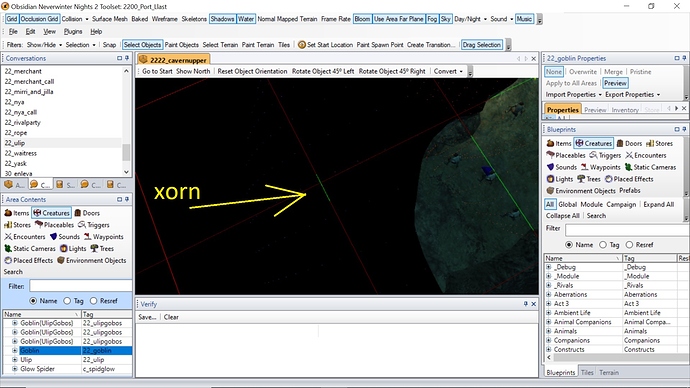 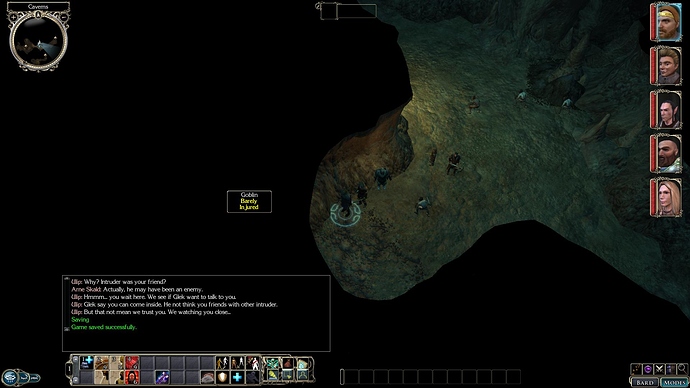 The toughest 4 xp in the game

Perhaps the area spawn in script can be modified to set the Xorn faction to merchant? Or just delete it.

Or, make it into an Easter Egg by just changing the model and renaming it. I can’t remember if someone made a NWN2 Xorn model, or converted one over from NWN1. Not that it can be seen.

Realistically, a faction change would be enough 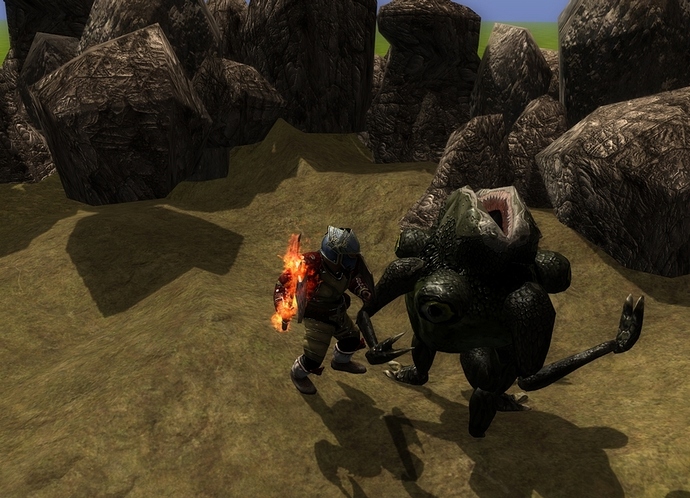 There is a trigger with tag “2222_st_ulip” that fires the “22_ulip” convo. In that convo there is a script called “22_cs_ulip”. In that script, add this line to the “void SetupUlipGoblins()” wrapper:
DestroyObject(GetNearestObjectByTag("22_goblin"));