Increase size of the chat-buffer

Does anyone know if the size of the chat-buffer can be increased? I’m printing lots of debug to chat (core AI) and looping through spell-determination causes lines to scroll up out of the buffer (they go ~poof : L20 wizards have a lot of spells to sort through)

ps. have already narrowed the scope down to what i want/need to see, but it’s at that point … I’d like to double the size of the chat-buffer.

chat buffer is the max length of single chat message or the total chat messages that are memorized by chat window before the newest messages start overriding the oldest ones?

the 2nd : total size of all strings in the chatbox

am hoping there’s an obscure parameter in one of the .ini files …

I don’t know if this will help you or not, but I’ll mention it just in case …

When I was doing some debug in The Scroll, I often came up against the “end” of a report before I expected it to finish. This “sounds” like the sort of thing you are talking about. Ignore me if I have misunderstood.

Anyway, in the end (iirc), I broke the feedback down to “report” in sections with a slight delay in between the points when the debug code would stop working/reporting. i.e. Because I was using a loop, I simply ran the first function with x-y, followed by a slight delay before calling the rest of the loop y-z. in this way, I broke up the debug feedback to be able to give me complete feedback, albeit in two stages. I also believe that there had to be a minimum delay for this to work, and I may have had to use a different method, something like maybe using the ExecuteScript function to fire the “second part” as it were.

Of course, I may be completely off track with what I think you are after … it’s been a while.

i get the end of the report, it’s the beginning that goes missing before the end finishes.

Ie, it’s not a too-many-instructions error. Say you have a textfile that you’re keeping, uh, current events in: but said textfile can never exceed 10kb. So you put new headlines at the bottom and delete the ones at the top every time the size of the content exceeds 10kb. Then save the file.

I want to increase the max size of that file to 20kb.

But i believe that value is hardcoded in the executable.

The workaround is either to filter SendMessageToPC() more aggressively, or use PrintString() to the logfile (which has a max-size of blahblah gigabytes). Or, in my case, procrastinate till I have a lower level spellcaster as an opponent.

data for the Old Man’s spells goes on for about 600 lines. But that doesn’t even include “loop preparation data” … HenchSpellAttack() in ‘hench_i0_attack’ is the central culprit

OK - I got the wrong end of the stick, I mean output.

Sorry, I do not know that one then.

That looks like some heavy debugging going on there!

That looks like some heavy debugging going on there!

Skywing client extension uses the windows cmd to log messages, and you can set the scrollback limit to a very high value. It does not render colors, but it’s a monospace font and you can align your output with spaces

thanks for the reminder – seriously i keep forgetting it’s there.

whenever I see it i think “oh that’s nice, I want to use that” … but, well, at present there are drawbacks 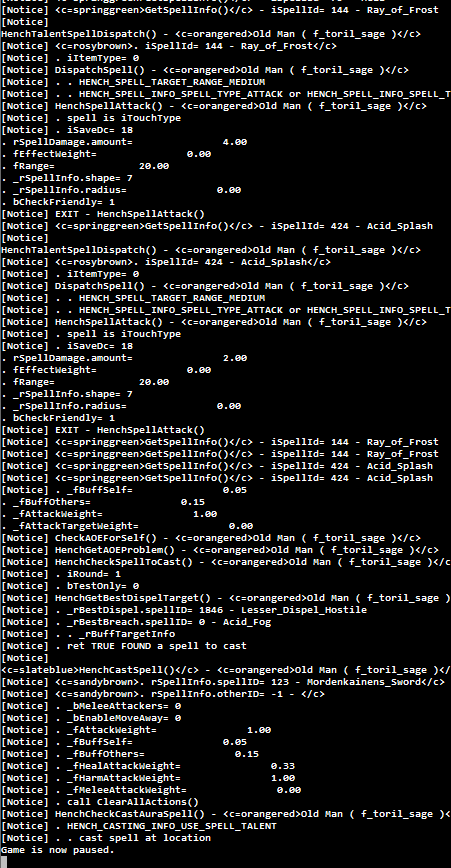 granted the CE log does have an adjustable buffer(!)