Hi, fellas. Been trying to create a new intelligent item (it’s a book) in a new module I’m working on. I followed this tutorial very carefully (https://nwnlexicon.com/index.php?title=Creating_An_Intelligent_Item). Tested the item in my module. Everything went fine, except for a problem: when my PC talked to the item, the game kept showing that it was Enserric the Sword I was talking to and not the book. The conversation always showed the name ‘Enserric the Sword’ and the portrait of a large black sword, even though the spoken contents of the conversation were what I had put in. What gives? How do I make the game show the name and portrait I gave the book? Any help will be appreciated, thanks. (Dunno if the recent installation and use of the latest CEP might have had something to do with it; before then I once tried the same in a different module and there seemed no problem at all.)

Just double-checked; yeah, I did all that.

Good to hear from you again by the way, Barbie. Hope all’s been well. 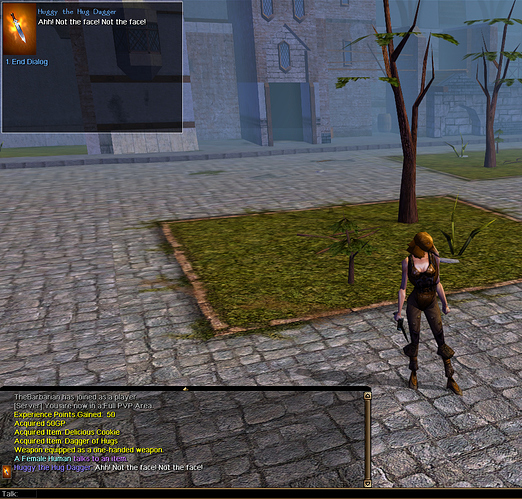 OK, I’ve followed the tutorial, and it’s working on my end.

I’ve got one more suspect for what could be wrong:

By the end of it, you should have overriding versions of two scripts in your module; x2_s3_intitemtlk, and x2_inc_intweapon. x2_inc_intweapon is a library; the edit made to it, which makes the alteration that the tag of the used item will be used to find the placeble blueprint to spawn, will only take effect in scripts that get compiled again after the change to the library has been made.

Check and make sure that you got the right line altered in x2_inc_intweapon, and then open x2_s3_intitemtlk again, add a space to it, and save+compile. Try to run the module, see if that fixed it.

… and compile all scripts: 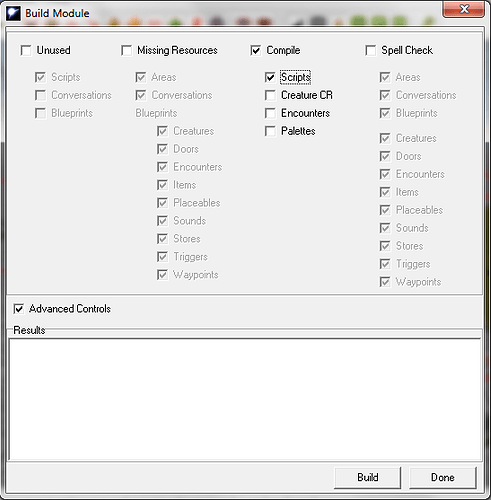 I guess I should have told you that, when I went to step 6 of the tutorial where I was told to add a line, remove it and save/compile the thing, the script editor suddenly opened the script file ‘nw_i0_generic’, and furthermore showed this error message:

The offending line in ‘nw_i0_generic’ was:

I originally decided to ignore all this and try out my item. That was when I found that it worked in every respect except for the name and portrait.

Perhaps I should also have told you that I created this item and found it to be without any problems at all in a much earlier module I did. With this new module I’m working on I wanted the same item in it and decided to try importing it from the earlier module, conversation files and all. Didn’t work. So I decided to try and remake the item in the new module from the ground up. The result is what I told you above. Perhaps I should never have imported anything from the earlier module in the first place? Certainly when I went to step 5 of the tutorial, I found that, hey, the line I needed to change in the script ‘x2_inc_intweapon’ was already changed…

That’s been happening for me a lot recently, too.

I’m just kind of mentally filtering it out at this point. Compiling all the scripts again fixes things when it does. I haven’t the faintest idea what’s causing this, but it doesn’t seem to be an user error kind of thing. Sometimes it happens, sometimes it doesn’t.

Watch out in case all your custom scripts mysteriously stop working at all, in one go, too; same solution - recompile all scripts again. Non-“false alarm”-errors will happen every time, false alarm ones won’t.

Good to know I’m at least not the only one encountering this sort of problem.

This is the first time I’ve seen a dagger being called ‘huggy’ by the way.

When the compiler suddenly opens an include like nw_i0_generic with some spurious message, it is a known compiler bug.

Your script has not recompiled until you do that.

Thanks! Didn’t seem to help, though…

Upon recompiling the same compiler bug appeared, and when I tested the item in the module the same problem was there…

Wonder if the installation of the latest CEP (2.65) might have got something to do with it all. In a much earlier module I did (which didn’t use any CEP content) the intelligent items I made showed no problems at all.

Okay, I decided to try all over again, but this time using tag-based scripting and steering clear of Enserric the Sword.

Been going through the contents of Grimlar’s page and trying to absorb them to the best of my ability. The following is what I did:

case X2_ITEM_EVENT_ACTIVATE:
// * This code runs when the Unique Power property of the item is used or the item
// * is activated. Note that this event fires for PCs only

I then tested the thing. It worked…

What gives this time and how do I rectify it? Help, please? Thanks!

One trip-up I could see at a glance here is that the caller (OBJECT_SELF) of tagbased item scripts is usually the module, so if this is all that’s happening when the item is being activated right now, then the command to start a conversation with the PC is currently being assigned to the module itself - and it can’t do that.

Try spawning the secret object placeable within your “item activated” event, and assign the PC the command to speak to the placeable.

If that doesn’t work right off the bat, it might be that the placeable is still spawning in at the time when the PC is trying to start a conversation with it, so you could try delaying the conversation-starting attempt.

Tried both suggestions. Still didn’t work… (But thanks all the same.)

Tried the following also. Since the placeable was already placed in the module, I figured it shouldn’t be necessary to spawn a new copy of it every time I use the item. So I changed the script to:

(I actually tried some other effects under ‘case X2_ITEM_EVENT_ACTIVATE’, and they worked fine. So it’s not the script ‘crazybook123’ itself that’s the issue.)

Are the tags of items, placeables etc case-sensitive, by the way? Or is ‘crazybook123’ different from ‘CrazyBook123’?

Hey, guess what: I finally got the thing to work!!!

(Want me to tell you how?

(Want me to tell you how?

Always. What’d the problem turn out to be?

Testing it, yeah - tags seem to be case sensitive. GetStringUpperCase() and GetStringLowerCase() can make it irrelevant in a bunch of places, but it’s something to watch out for when using GetObjectByTag, for sure.

The Blueprint ResRef of the placeable must be identical to the item’s tag. That’s the key that finally unlocked the whole thing!! Once this was achieved, the scripts you provided worked like a breeze!

Trouble is, once the placeable is made, its ResRef can no longer be altered. What to do? Scrape it and create a new placeable named ‘crazybook123’. Then its tag and ResRef would all be ‘crazybook123’ as well. The name itself can be changed.

Glad this &U^^$$@#!! problem’s finally solved. Now to work on my off-limits-to-bards magic item…

Brain-storing-misinformation-abort! Tag and resref don’t need to be identical. CreateObject uses the blueprint resref to spawn the object, not it’s tag, is all. Tags aren’t unique to the blueprint, so they couldn’t be reliably used to spawn an instance of a specific blueprint even if there was a spawn-object-by-tag function.

Trouble is, once the placeable is made, its ResRef can no longer be altered. What to do? Scrape it and create a new placeable named ‘crazybook123’.

Thanks for the additional hint!