(Continuation of this thread). 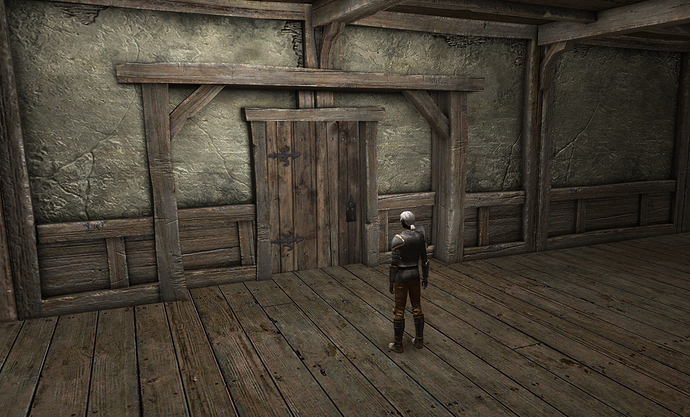 Your work puts to shame the stock door texturing. I like the classic framing arch. Plus you can put torches on the posts.

Gorgeous look to it

will this be an optional skin ?
a total replacement for standard
or a totally new set?

My understanding is that this will be a new tileset.

Looks very good, I like your wood corner pillars.

It looks like a old farm house door I saw in Germany. The House was about 800 years old. Really looks great. Really good rough cut doors, floors and pillars.

Thank you for your comments

Greenman : yes, I know very well this kind of house, I live in an area where there’s plenty of this kind of centuries-old timbered houses… a great source of inspiration !

I almost bought that property until my wife talked me out of it. It would have been a lot of work since we would have had to keep it up as is. It was considered a historical site.

Work is going on with this tileset. The wooden walls variants are especially interesting to build modest shops or taverns : 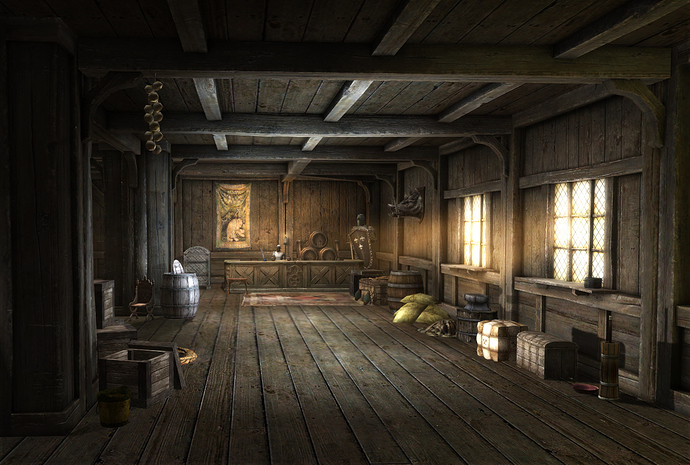 (edit : here is the bricks variants, interesting too) : 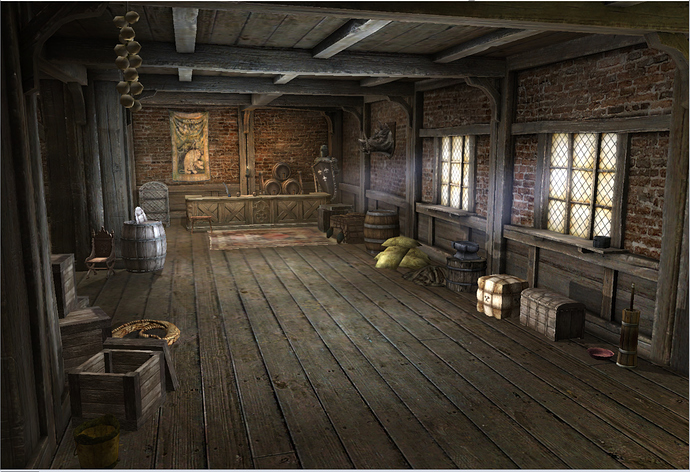 And here is the damaged floor tile : 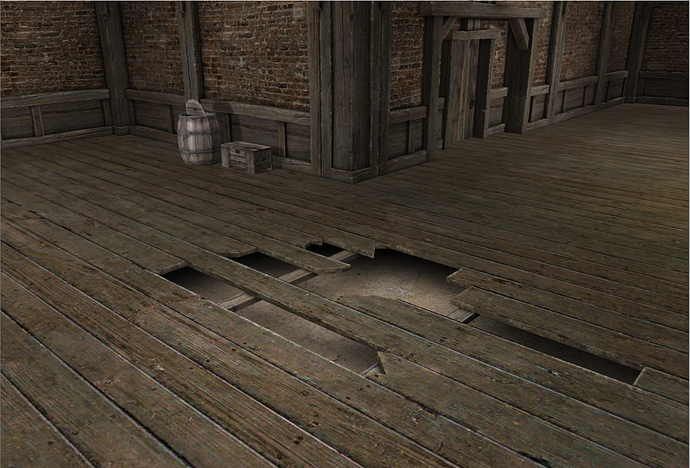 It is looking very nice K, One thing the Witcher set does well is give us placeable windows. As a builder it’s more flexible and for the modeler it allows for a more generic base set which can have several window options without adding many more tiles to the set. I guess I am asking if those windows are built into the tile?

The whole set is lovely work however, I think there could be an issue with the worn out parts of the models; the window sills are an example. I am just thinking that, when you add wear to an object, like the window sill, it becomes very obvious when you put two objects together that they are repeated. For me the recess on the door is the same. Having it in a recess suggests a very thick wall. This might be fine for an external wall but I wonder how it will look for internal walls? Especially plaster ones? Thus, if that is the only door way, it may look odd in a large tile set interior.

I am really looking forward to this set. More than the others you have made because those have specific/limited applications. This one, if it’s generic enough, will be used pretty much everywhere. I already have dozens of reskins for the current interior set. I hope to have just as many for this set

Yes, PJ, the windows are built into the tile. There are several problems with placeables windows, the first being that such placeables would look strange next to a “real” tile window : no shadow outline on the wall and under the sill, and it would look flat compared to the other windows (If you look closely at the pictures, you’ll see that the windows are slightly embedded in the wall, giving it some depth). It’s flexibility versus visual quality, I suppose, and I always tend to favour the latter. Don’t worry though, I plan to make enough variants with windows, so it can suit a large range of needs.

Regarding the worn out parts, I don’t think this is a problem, on the contrary, it brings some variety. The windows sills aren’t a good example, since I made different meshes for the two sills, as you can see on this picture : 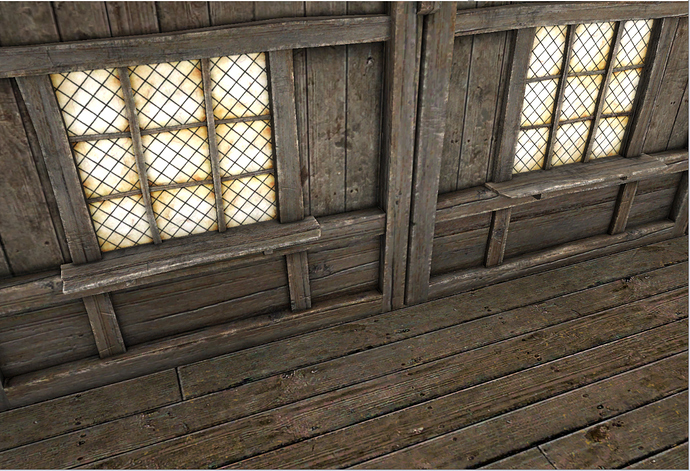 Even at close distance, the two sills doesn’t look the same at all. A good example would be the wood beams on the walls and the ceiling: adding some worn out details helps to differentiate the different parts, as long as you don’t copy/paste the same object everywhere.

The recesses on the door tiles are necessary, and I think it adds some nice visual details, helping to break the monotony of the walls : 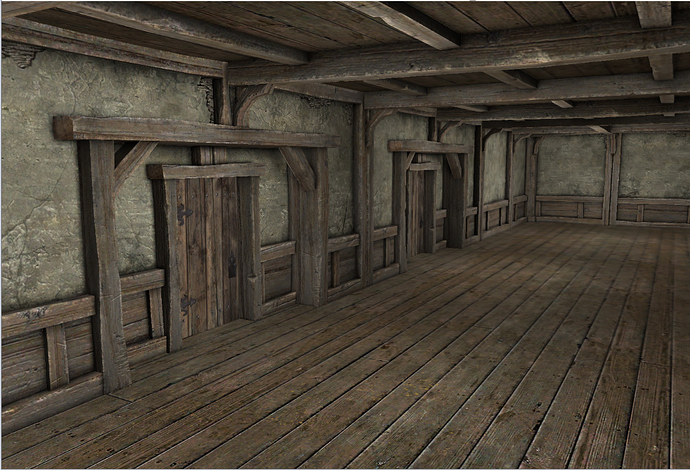 There are recesses on many stock tilesets, including the interior one. And there’s a reason to that : without recesses, the door would be sunk deep into the wall, making it barely visible, even if you use a thin wall. Here’s a picture of an early attempt I made while building the door tile without using a recess : 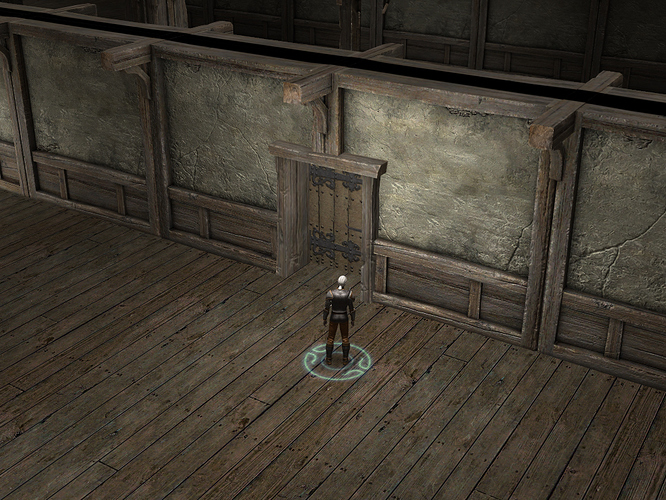 It’s self explanatory, I think

They’re all looking really nice, Kallister. I understood the reason for your framed arch right away, having run into the same problem myself. There’s a reason the walls of the stock tiles are divided into thirds…

A variant I haven’t seen on a tileset is a bay window. Probably because there usually isn’t enough room behind the wall. But it might work for a room tile, if the wall were foreshortened a bit. Hmm, I might have to play around with that. Maybe make a placeable wall or something.

Great work Kallister now this looks like a Warehouse in some place like Waterdeep or any large City. rj the Bay window is a more recent style than 14 century. I could see something like that style in D20 modern maybe 19th century buildings/ houses. They would have been impractical in the 14 century because of your heating escaping from the buildings/ houses/ castles.

Aye, but this is a fantasy setting and we have tudor style buildings with oriel windows.

Thanks for taking the time to answer my thoughts in detail Kalister and post the new screens. I can see your thinking and, as a non modeler, could not see the issues with the placeable windows.

I can see the problem you have with the doors. I prefer the second example but I can see the issue with the post and why you have gone the way you have. In the end I am going to be happy to have what ever you create so I shall await the final set and enjoy whatever you come up with.

Thank you, I’ve also developed an allergy to these blocky pillars

Here is a new tile variant, a firepit : 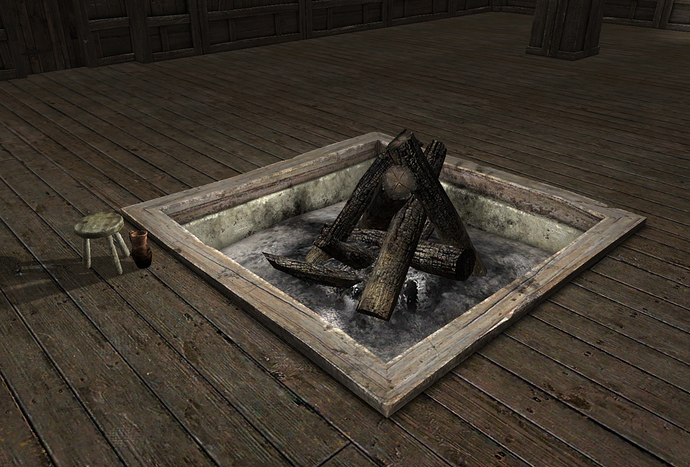 A rallying point for the taverns, I think… let’s hope no local drunkard will fall in it…