I’m experiencing some issues with specific tilesets that I can’t explain. Do you have any idea what might cause them?

The first case is related to ctp_dungeon_lok.hak from the official Vault page. I create a new module, add ctp_common, ctp_loadscreens and ctp_dungeon_lok to it in this order, with ctp_common on top and dungeon_lok at the bottom. It compiles fine, but when I try to create an area with LOK Dungeon selected, I get this error message:

ctp_cave_ruins, on the other hand, works without issues though. I’ve tested it in both toolsets, Diamond 1.69 and EE, with the same results.

The second case is related to TR’s Fern HD module. When I load it in-game, it crashes the EE right after character selection. And when I examine it in the toolset, the starting area, using medievalrural.hak (2017) from Zwerkules’ Mountains and more gives out this error message on load: 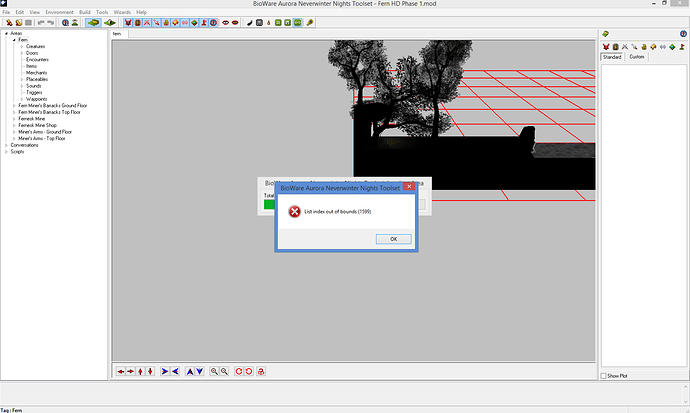 and the toolset stalls.

I am able to import and open the same tileset in a fresh module, although I haven’t tried placing all the groups, features and terrains yet to see if any of them causes the crash for me (I tried only half of them so far, without problems). TR doesn’t experience any of this on his rig though. For him the module runs fine and can be opened in the toolset.

In case it matters, I’m running NWN EE on Win 8.1 with a Nvidia GeForce GTX660, and I’m on the last stable patch (v82.8193.20.1). I haven’t had any issues with other modules so far, and neither with other tilesets, although I’ve only started to experiment with the toolset again after 10 years or so.

LOK Dungeon: “6.0 is not a float” seems to be an issue with the model… Try creating a very small 2x2 area and see, if that is created. If yes, (save it and) use the eraser to identify the working tile variations and then use it to change the variations.
If it crashes at the start, restart the toolset and try it a few times more - in the hope, that it will - at one point - choose a working tile at the beginning.
If this works, then you might identify the flawed tile - as a first step.

Okay, I tried what you suggested, 12 times, but the result was always the same …

I tested other versions of the tilesets, and these two worked:
LOK Dungeon Tileset
LOK Dungeon Reskin
while this one caused the same issues:
Brownstone Dungeon

I’m assuming it’s something in the CTP version, and maybe Brownstone Dungeon was based on that?

Let me guess, you use a different language than English.
“6.0 is not a float” is what you get when the Transition hight in the set is set to any number with a decimal point in it and your system uses a language that expects 6,0. None of the other numbers cause any problems using “.” but for some obscure reason it doesn’t work for “Transition”. That is why you can’t have height transitions like 2.5 and also why you should always use an interger for “Transition” even if it is supposed to be a float. This bug has been around since NWN first came out.
The other error message shows you that the area uses a tile 1599, but your version of the tileset is older and doesn’t have that many tiles.

Well, my system is set to German, but my NWN installations are currently in English, game and toolset. I did switch the language of the EE a few times recently, to German and French, but that was before using the toolset, and now it’s back to English again. And I re-installed NWN Diamond in English recently, too (but I had it installed in German before).

In the case of your tileset, if I understand correctly, that means that I’m using an outdated hakpak with the same name? I’ll ask TR about it, thanks!

Okay, problem solved. I actually had the wrong hakpak, since the “Mountains and more” page lists several different ones, and “April 2020 compiled” had a different name, so I thought the module required the October 2017 version. For some reason connected to my cluelessness, I didn’t even check “April 2020 uncompiled” because it sounded like something for builders, like raw files without hak or something. Dumb assumption, I know. My bad! Thanks a lot for your help, Zwerkules!

That only leaves the issue with the LOK Dungeon. 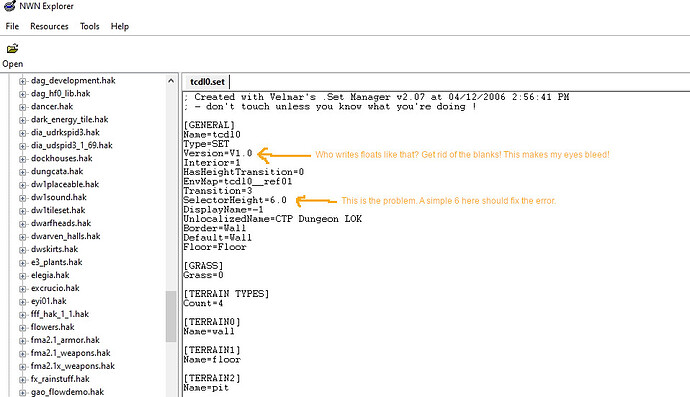 That solved the other problem, too. Awesome, thanks a lot!

I hope I have never to see floats written that way again. It’s almost as bad as blanks before question marks.

Now that is sorted I have one little thing that I found out about the LOK Dungeon tileset. I had intended to see if I might be able to replace the textures for it with a set of fancy mapped ones in a separate hak to be placed above the original tileset. So I extracted the textures from that hak and was stunned. All of the textures are tiny - 32x32 24 bit Targa. I am more impressed with how the Aurora engine makes them look as good as they currently do. Somewhat confused I have put my idea on the back burner.

That’ll teach me to eat something 1st. They are of course the minimap images that I saw…