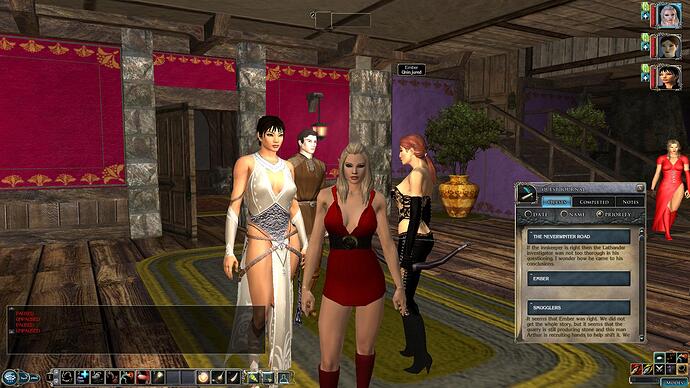 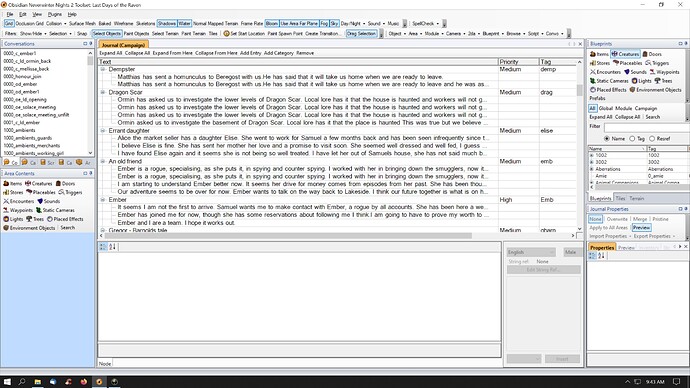 journal2560×1440 800 KB
What causes journal entries to be blank?
The journal entry “Ember” actually shows as completed, as well as being blank in the current quests.
There is another quest “An old friend” which I must have completed, but isn’t in the completed list.
The two journal entries have similar tags Emb & emb, could this be causing a conflict?
travus February 13, 2021, 1:57am #2

If that’s Tales from the Lake of Sorrows, I made an unofficial patch awhile back that fixed that issue in the journal (among other things). Were you using that patch by chance?

Here’s an Unofficial Patch for TLOS I’ve been working on. So far it ONLY covers all of Sheep and Stone, Caravan Club and the very beginning cutscenes of the Last Days of the Raven. It fixes the issues with the companions not being persistent across modules and they no longer loose their equipment. NPCs are no longer in the party select GUI. Solace is deleveled when you first meet her so you can choose archery or dual wield when you level her back up. OC party knockout death is now in use. The c…

But, yes, the journal tags are not case sensitive. So ‘Emb’ will conflict with ‘emb’, causing a blank entry.

If that’s Tales from the Lake of Sorrows, I made an unofficial patch awhile back that fixed that issue in the journal (among other things). Were you using that patch by chance?

No I wasn’t aware of it.
Thanks for the reply.
Edit: I just read the txt file from your patch. It would have saved me a lot of work if I had known about it before I started changing everything myself.
But I’ve made too many changes to start using it now.
Edit 2: I installed your patch and am starting again with my cosmetic changes.

Is there a way to update the quest journal when you read the cave note in Thurnock’s chest?
Once you read that note and get the key to Samuel’s loft, you can no longer talk to Samuel about the secret door, and the quest stays unfinished in your journal.
Since the note tells Thurnock to use the secret door, it would be a good alternate ending to the quest.

I’ll see if I can’t make a fix for that case in the future.

To clear that quest, open your console and type the following:

I’ll see if I can’t make a fix for that case in the future.

Thanks, I added an extra line to the journal, and just used the console to run it. 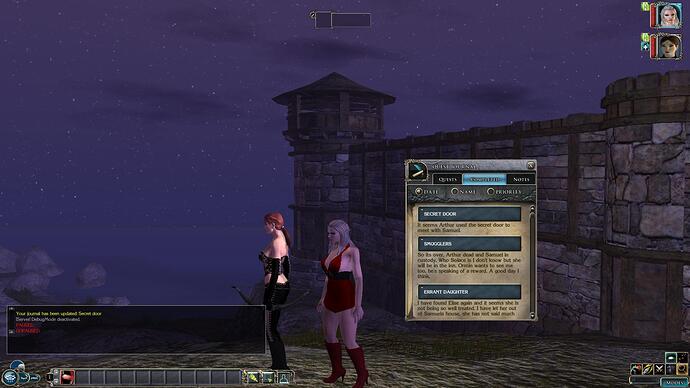 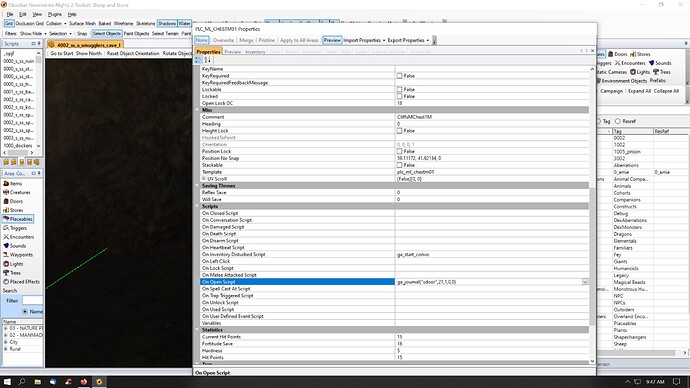 I just added this to the chest that holds the cave note, will that work?

That won’t work.
Your best bet is to make an OnAcquire script. I’m pretty sure the tag of the note is “note3” but you may have to verify that for me. If that tag is correct then the OnAcquire script must be named “i_note3_aq” like so:

Once you get the note out of the chest, this script will fire and advance the journal entry.

Thanks!
By default it dropped the script in the Sheep and Stone folder, will it work there? (when starting a new campaign)

If starting a new campaign then, yes, it’ll run from the module folder.