Knockdown Effect - Can it be detected on a PC?

The subject says it all.

Is it possible to detect if a PC has the Knockdown effect on them?

not sure, try this tho

No, it’s not possible without using local vars (or custom spell ids, maybe). The code above will not work.

I had not seen (or had use of) that function before and so looked it up in the lexicon and found this in its remarks - and so will try it out just in case.

This should return TRUE even if the feat applies spell-like effects (such as Barbarian Rage, which has a “spell” attached to it, to apply effects), although it cirtainly accuratly reports when such feats as Knockdown are applied to a target." (SIC)

That was my initial conclusion, but unless there is something I have missed, it may be that KevL has seen a means to detect it. Unless the Lexicon is out of date with ref to NWN2 perhaps?

to me it’s still up in the air. I used to use a custom var, eg. kL_VAR_ISKNOCKEDDOWN like Aqvilinus suggests. Later I saw GetHasFeatEffect() but didn’t test it …

to me it’s still up in the air. I used to use a custom var, eg. kL_VAR_ISKNOCKEDDOWN like Aqvilinus suggests. Later I saw GetHasFeatEffect() but didn’t test it …

Well, I just tried testing that function and I am still not 100% sure even now, because the PC appeared to be “knocked down”, but I still had some aspect of control and my own test code was not reporting “compromised” - which would suggest it does not work … except I have not yet been able to confirm from a positive aspect if it does report “compromised” when I do not have any control - regardless of what the animation may look like.

Anyway, I will leave the function in place and see how it goes with further testing. I don’t really fancy adding var checks to the OC if I can help it. It’s a “minor … ish” aspect of the turn-based feedback, in case the player did not realise they were “knocked down” and so “compromised” as a reason for not being able to possess and control a PCs actions (if the animation was also not quite in synch with the effect).

did some tests: didn’t work on either a monster or my PC.

set them up with impactscripts, etc.

GetCommandable() returns false if knocked down though.

Are they lying on the ground in the middle of the battle and not groaning?

I wonder what GetCurrentAction shows?

I have tested ACTION with a 0.1 seconds delay check after using an item and it returned ACTION_ITEMCASTSPELL (19), it takes a non-zero amount of time (more than 0.1 seconds) for action to clear to invalid after a knockdown.

I have made this subroutine to check if a creature is knocked down or not, and tested it (not very much)
If someone thinks that it can yield false positives (for false negatives I’m more confident, although I didn’t test if the hardcoded knockdown feats apply an effect or not) then we’ll see if we can add further checks, if it’s something that can happen outside of 1 in a billion chance in normal gameplay. 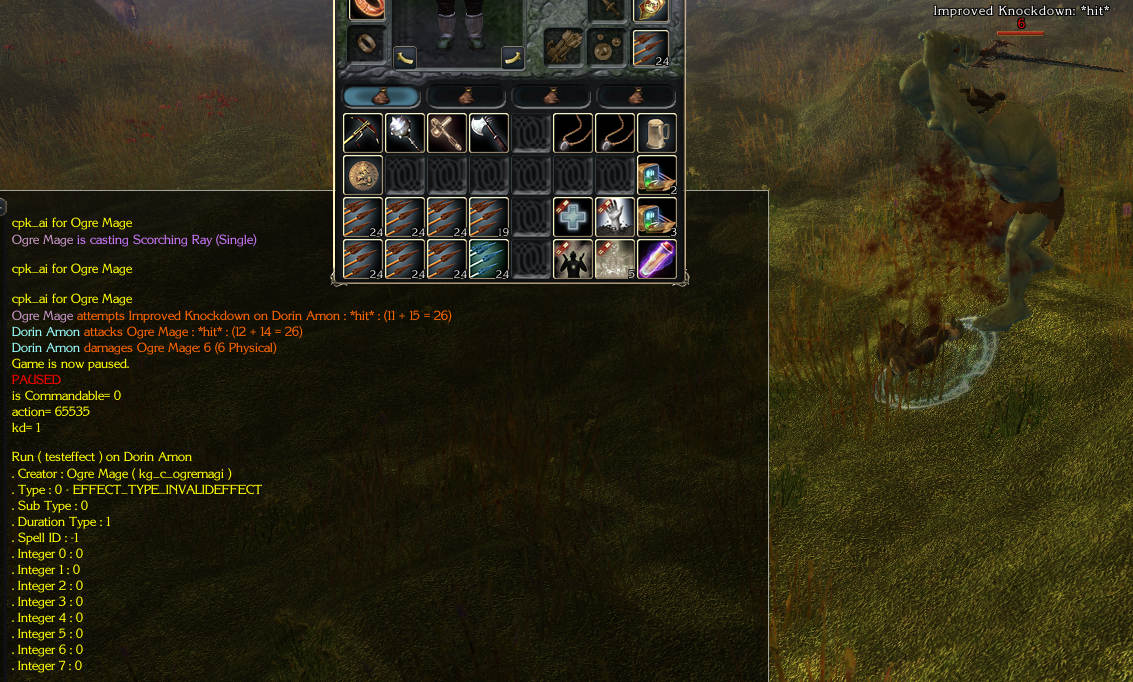 With ACTION_INVALID it can give false negatives, I have replicated it already with a knockdown applied by an item on myself, checking after a 0.1 delay it still returned 19 ACTION instead of 65535. Knockdown does not clear action immediately.

Also, the duration check and the spell id check will give false negatives on custom-made knockdowns or knockdowns associated to spells. That would only work for the feat knockdowns.

cool. I changed the function name and added a note

Thanks everyone! (I have just caught up after the last Lord’s Day.)

GetCommandable() returns false if knocked down though.

This is good to know, so this should be a good workaround. (I was looking too closely at the problem, and this may be a solution along the lines of “not seeing the wood for the trees scenario”.)

I have tested ACTION with a 0.1 seconds delay check after using an item {clip}

The call checks that are made are “continuous” from an active XML (update), so any delay would/should not come into it - hopefully.

increase the odds to a billion++

Sounds good! I’ll try that piece of code - although I may simply also only need/use the GetCommandable() option, as I am undecided whether to indicate every “compromised” option (by exact description), or simply stick with just “compromised” irrespective of the condition causing the compromise.

So, as GetIsCommandable is a good catch-all for any other conditions I may be forgetting, it may be the simplest answer.

Many Thanks to every one who helped!
Lance.

UPDATE: Testing has confirmed that the catch-all GetIsCommandable is a good workaround as it highlights the issue to the player as to why they cannot also “possess” the PC to issue a command when the game is paused. Great help!

(i.e. A PC cannot be “possessed” when in the knockdown state.)