Let's break the barrier of level 160!

Thanks to the powers of Hex Editing, I managed to raise the level cap from 30 to 255.
As this screenshot here will prove: 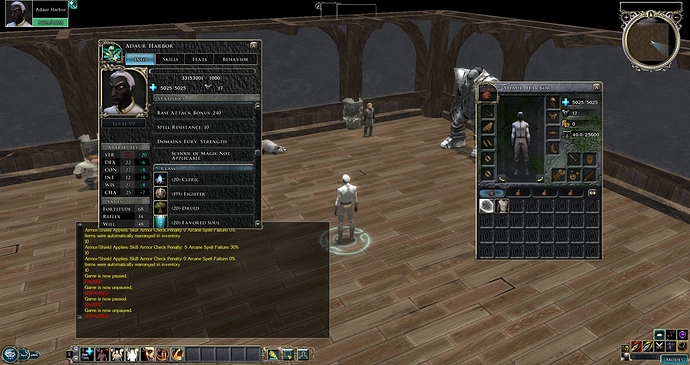 A new problem arised, past level 40 classes simply “break”. The BAB they give resets to zero (yes, you LOSE the bab related to the class), and the same happens to Saving throws. Fighter bonus feats stop being awarded past level 40 as well.

Please note that the standard 2das have progression on BAB, saves and feats up to level 60, this implies that the 2das are being ignored past the level 40 cap.

From the screenshot you can see I managed to cook up a workaround fix (via effect BAB minimum) for Base Attack bonus. It’s completely messed up in the combat log (shows negative), but it definitly works, since I was attacking like a chain gun and always hitting.

Anyways, this problem means that we are still effectively capped at level 160 (4 classes x 40) instead of 255.
Someone will say that this is enough, but I will have none of it!

So, the purpose this thread…

What could we do, via hex editing (there must be a 28 somewhere that must be turned into an FF!), or via workaround scripts, to fix this problem?
The biggest issue so far are saving throws, I can’t work around them via scripts, the effect bonuses are capped very low and the set saving throw function says it works only for doors and placeables, not PCs.

This shall be the challenge of the new year.
LEVEL 255 WILL NOT DENIED!

P.S. On a side note, this might be a good place to also discuss raising the cap of abliity scores from 50 to 200 or something and skills from 100 to err 200 at least.

Well done on trying that.

You can have a look here;

Tested it on a modified Jeg’s Training and can confirm it works, Thank you so much for this. Btw, I think that the max will stay level 40 even if you edit the 2das, those hex edits on the link you provided were specific about changing it to 40 hardcap, unless you figured out the way to hex edit the nwn2main.exe file beyond level 40, that will stay the max level regardless of what you do to the 2das.

I have tried going for cap 60, but no dice. even after changing the xp 2das to reflect the new cap, I get bounced back to cap 30. So how did you do yours?

The 160 cap is probly hardcode somewhere, since that is max what you can set the NPCs to, 4 classes x 40. which makes them very powerful. The DC they generate is nigh unbeatable - Vampiric Feastings anyone??

Maybe you can list out the steps you did in your level cap breaking.

I think that more than a 160, it’s a 40 that is hardcoded somewhere. So it’s a 28 value somewhere that should be changed to FF.
Beyond level 40 in a single class, no matter what you do with the 2das, the classes will have the following broken:

And this happens despite the fact that the standard 2das all provide a progression up to level 60. So, it means that there’s something hardcoded in there that simply tells the game that if the level in a single class is higher than 40, the player must be cheating, so it has to be reset to 0 on those values.

Anyways, I will soon post links with the modified files and all the instructions needed to achieve level 160 at least.

More bad news… past character level 39 (so level 40 included, regardless of class level) the SetXP script function no longer removes levels, this means that in-game rebuilding is no longer possible past that point…

Regular feats you continue to get because you get 1 feat point every 3 levels, every other level after epic/level 21. There appears to be no block.

You did not mention ability score point so I believe it it also the same, 1 point every 4 levels.

[
More bad news… past character level 39 (so level 40 included, regardless of class level) the SetXP script function no longer removes levels, this means that in-game rebuilding is no longer possible past that point…
]

Probably because the underlying mechanic is still based on a notional d20 die roll. It’s inherent in equating dice based D&D style rules into code.

Here in a nutshell is the problem with actually building playable content in NWN2 past level 40.
https://www.youtube.com/watch?v=ozkHwFG91AI

That does not mean your work isn’t interesting however. Learning how NWN2 works and finding new ways to extend it is makes it worth visiting this forum every day just to see what new things you’ve uncovered.

I just raised the level cap to 40, and while I don’t think I’ll ever be able to get to that point, I’d like to know how you raised it even higher and then worked around the issue of BAB and saving throws reverting to zero.