Live in a Castle & Starve

I don’t know if anyone else has noticed this but I haven’t been able to find a single castle/palace tileset that has either a kitchen or kitchen terrain. Oh there’s plenty of places to store food and drink, just nowhere to cook it. This is just a bit ridiculous when you look at such places in the real world. Take Hampton Court (Henry 8th) for example and look at its kitchens. Look at the size of that fireplace!

Look, I’ll be overjoyed if I’m wrong about this but I haven’t been able to find a tileset with both storage and kitchens. Do you know of such a tileset?

You mean like Fort Interior? That’s my go-to castle interior tileset. I just wish the line-of-sight wasn’t so bug-filled.

The “storage” part of the standard castle area has a possible tile with a huge stove-like thingy. I used that plus a buttload of placeables to make a kitchen, but I agree it’s not completely satisfactory.

I agree. Then again, most pre-decorated tile pieces leave me wanting in almost any tileset. Lack of kitchens, storage rooms, dungeon cells, armory or smithy rooms, etc … . Between the CEP, CCC, Project Q and independently posted placeables on NWNVault, it’s not a huge issue.

Personally, I build most of my interior areas using the clear/blank tile options and then sprinkle placeables as needed. Does it take a little longer? Yup! It also helps create unique areas constantly. I admit, there are times I find it tedious, especially if making several areas of a similar type like populating interiors in towns and villages with residential interiors. After a half dozen my enthusiasm wanes significantly. Luckilly, I can just set them aside, shift to making a new dungeon or tweaking scripts for a bit or creating yet another new creature/NPC to toss at my players. Later I’ll circle back for another swing at it.

So while diverse tileset options are handy, how often can one use them before “everything” begins to look the same in your module? Sure, drop a loaf of bread on the stove’s edge in one version, a baked turkey on the next, but after awhile it’s the similarities that stand out and not all the little “extras” you sprinkled around the tile.

Really, the size and scope of your module is another factor. If you have just a small village and a few adventures in and around it with a well thought out and entertaining story/plot line, then its less of an issue. If you have a PW with a couple thousand areas as I do, then by shear chance things begin looking the same over and over. So you end up using the pre-decorated tiles less and less.

I also find that in many modules and PWs, folks have ignored the “other” things that can have just as great an impact of the “feel” in each area. I’ve ditched more than a few stand alone modules simply because they lacked the little details like setting the area lighting (Why are so many interiors so damned glaring bright?!), using skyboxes (yes, even in interiors … come on, at least blackout the sky so the area looks a little more realist as you pan around), setting music to fit the theme/mood (including battle tracks) and my biggest peeve of all … not adjusting the area fog distances to something reasonable unless dense fog is actually required.

Oh, absolutely. Some years ago, before I started using CEP, I really took pride in making use of the vanilla tilesets and placeables in creative ways, and even after I got CEP and was blown away by its possibilities, I still kept some of those old areas because I really think I did a good job with the resources at hand.
Some of the extra little backstories in the module I am currently working on have stemmed from this. There’s one noble residence which “has been adapted from an old chapel” because I didn’t want to use yet another House X outside tileset and went with the churchy thing instead.

I took some screenshots of the kitchen I mentioned earlier, just anyone was interested. This does use some of the CEP resources, and it’s not groundbreaking or anything, but hey, I figured, why not. 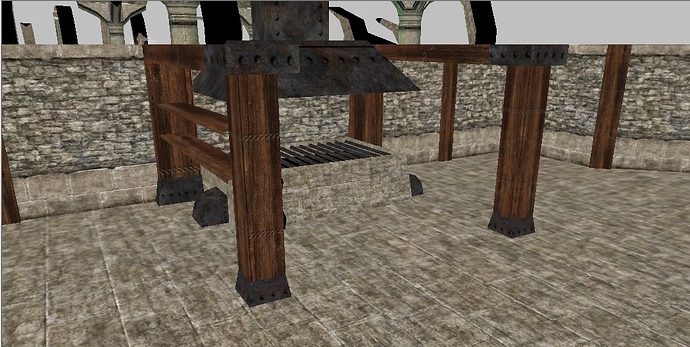 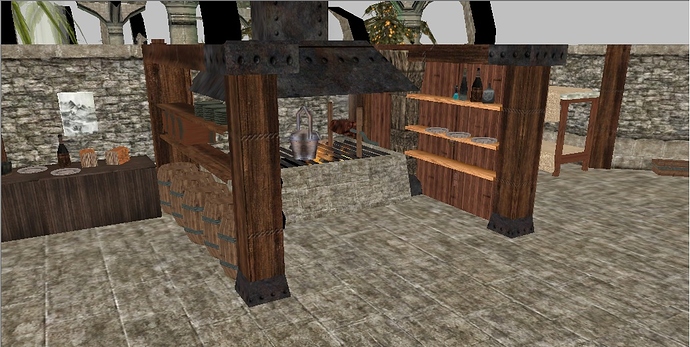 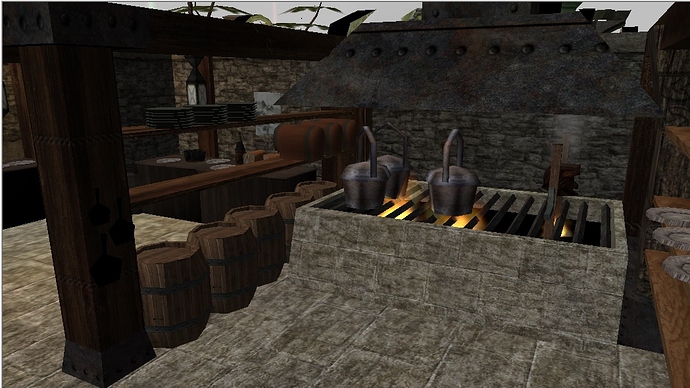 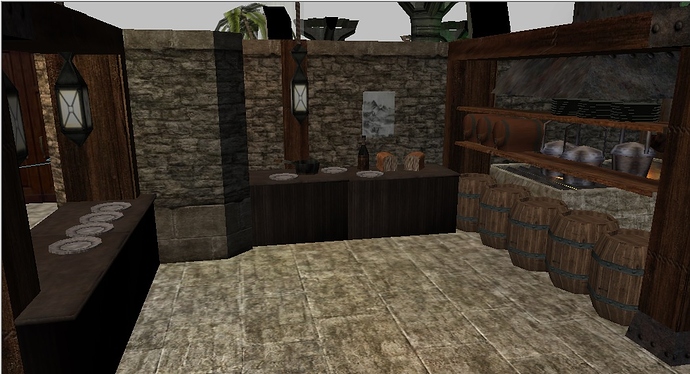 Nicely done. I believe the little things make or break a scene. Did you have too load all those shelves? Nope! Most don’t bother. But you did. It shows an attention to detail that is usually reflected in the module as a whole when it comes to other things like plots and creatures and the overall experience.