is there a creature model of a Remorhaz somewhere? (for NWN1)

Remorhaz are insect like creatures with 8 (?) legs which can be found in Icewind Dale (Heart of the Winter)…

Not certain but you might want to check out Project Q. There was talk about a Remorhaz in there on the old forums.

There’s one in the CEP because I’ve been using it in our Against the Giants adventure setting for over 10 years now.

Thank for pointing this out.

thanks for your answer. Didn’t find any in CEP (2.65), at last not under this name. Did you publish “Against the Giants” somewhere? Well there are a lot of publications of this title, which one is it?

The Against the Giants version we use is not published but apart of the PW I run, World of Greyhawk. The remorhaz was initially apart of the CCP (Community Creature Project), and then was fully absorbed by the CEP when that project petered out. The below picture is the version in the CEP. You may have missed it because there are a thousand appearances or more in the CEP and not all are in the palette. You need to scroll through creature model/appearances to see what’s really there. 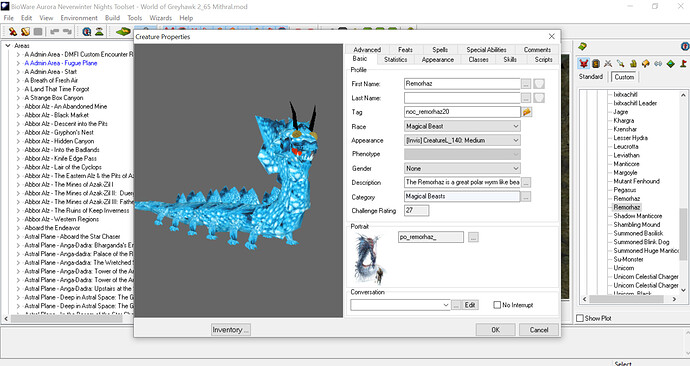 Best one is found in this project by Cervantes

A reskin of the CCP version 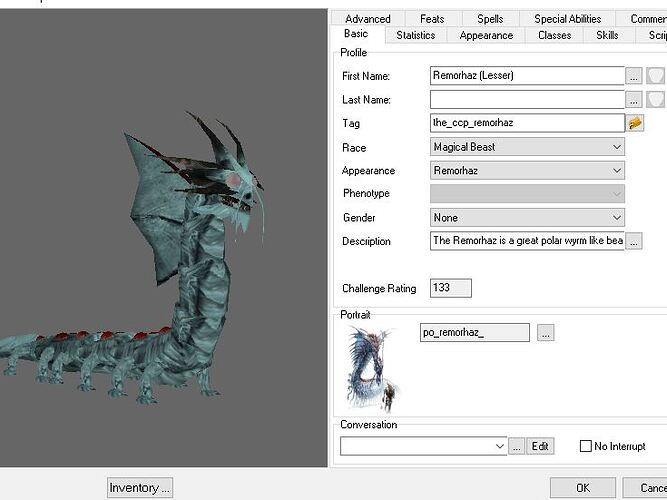 Thanks [DM_Wise] and [Imtherealthing] for additional information. By now I’m using the CEP-Version (seemingly with the reskin by cervante) in combination with the scripting of the HOW-Module

@Imtherealthing , I did not realize there was a reskin! Thanks for posting!

That’s actually the Project Q reskin. Not sure what changes, if any, Cervantes made to it for his creature catalog.

Just posting so that people already using Q that see this know they already have it.

Don’t be be so modest Pstemarie. I beleive you and Rollo did the remodel of the Remorahaz for Project Q. I remember it used to crash to the desktop because of the node count but you fixed that by reducing the nodes. All I did was get rid of some duplicate meshes got rid of some unneeded verts and I think it had a couple degenerate faces but other than that it’s all your great looking model.

Both Cervantes and Pstemarie did great on these creatures. I would encourage anyone to get this project by Cervantes.