I had a random idea with a character, maybe like a statue, magically being incased and petrified behind some glass. Are there any placeables (I have looked but not quite found anything suitable) that could be suited for this? I was thinking something along the lines of this picture from one of David Eddings’ books: 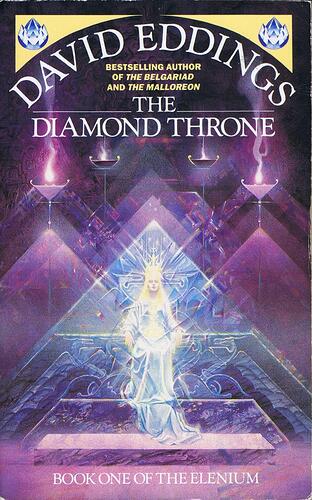 I don’t know about this but I think if you use an effect you can’t destroy it easily so if you plan on smashing the glass at some point to free the person it could be an issue.

As for placeables maybe by fiddling with the alpha layer on their model they can be made practically invisible so any would do the job, like an enlarged spirit housing ball or the pointy top of a house that’s sunk in the ground. There are temples in the placeables with see through windows so all is not lost and it is possible to have glass.

At the moment I use something that @4760 sent me. It’s not perfect but it will have to do, I guess. 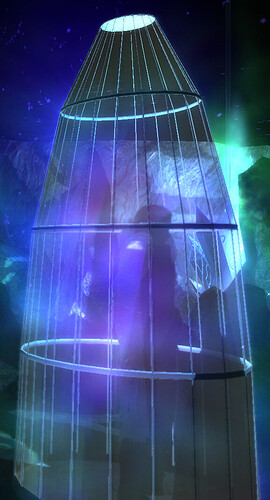 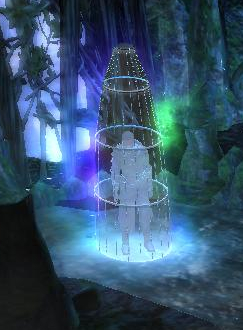 I wish it was more “glassy” or “crystal-sy”, but what can you do…

Ok, so I had this good idea (I thought before trying it) of using the stock placeable Ghostly Light(4) and turn it to size 4;4;4, then making it an inveronment object so that my character can stand inside it. However, when checking ingame the character isn’t as visible as in the toolset, plus, it would have been good if someone with modelling skill could have just removed the metal around the crystal. 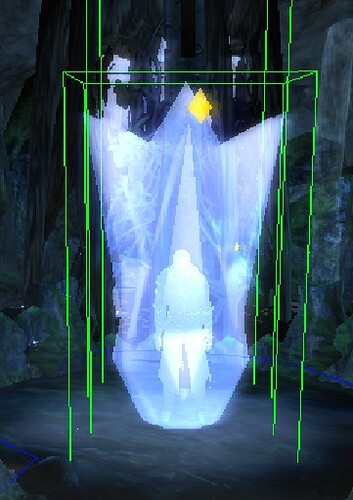 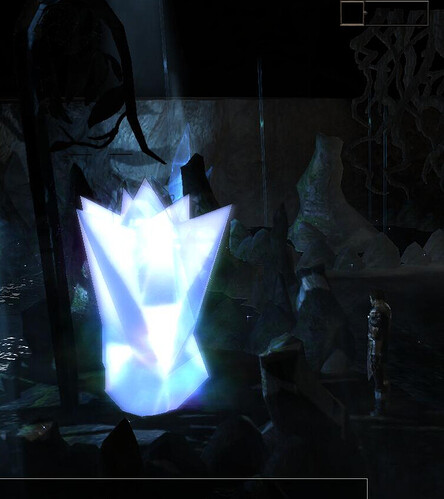 EDIT: I transformed the Ghostly Light to a placeable and made it static and walkable instead. Then I put fx_frame_ghost_visage on Appearance(special effect) but it’s still not enough transparent. Don’t know if there is such an effect in the game but…

I’m fairly satisfied now. I took one of the special effects that I had for a spirit character in my third module, modified that so that the transparacy of the crystal was as high as possible. That wasn’t enough however, so I had to adjust the lights in the area and make sure they didn’t cast any shadows. Now, you can see from most angles that there is a character inside the crystal: 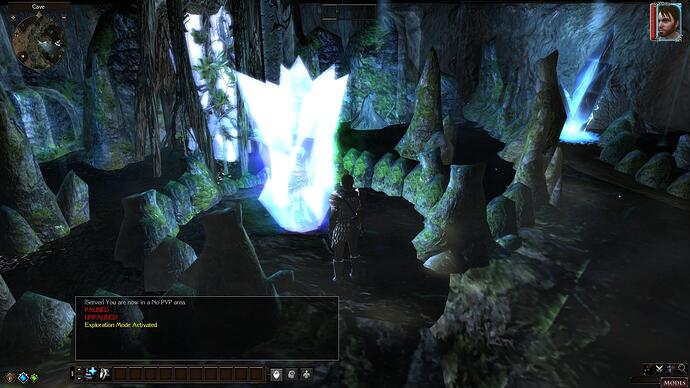 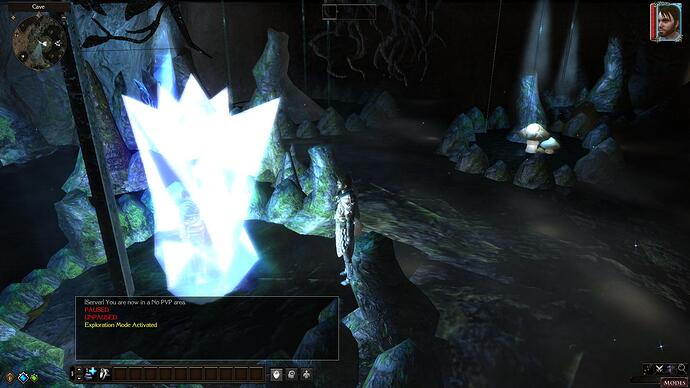 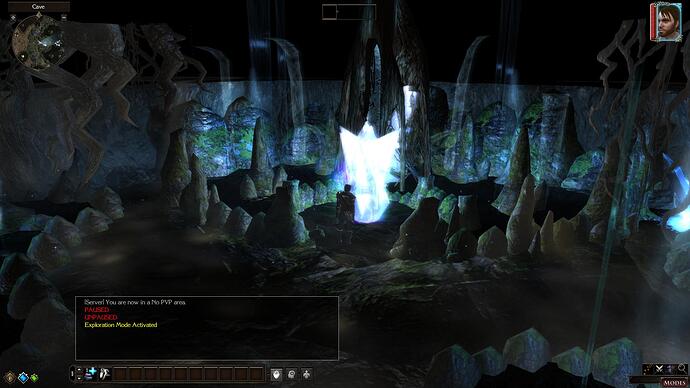 andgalf… That looks pretty good and if you cutscene a conversation about it you can ensure that you get the right view of the person inside.

Shadows can make a mess of all sorts of things, I don’t think they got them right when they made the game. I think they should have been switched off on everything and then you decide what has them or casts them not the other way around.

@Tsongo - Yeah, I agree with you on the shadows. Good idea with a cutscene conversation. I’ll see how I go about it. I feel like this module I’m making now is much more chaotic in how I do things. I do everything at once and I don’t even know where the story’s gonna go exactly. Before I almost always did one area at a time and went from there, but now it’s all over the place. I have a few ideas though, but as usual, I let the characters and situations dictate where I go. It has worked so far for me, and it’s much more interesting when characters say what you don’t expect and tell you where to go. That way it’s exciting for me too.

andgalf… That’s how I make modules by not knowing what’s going to happen next and letting the characters go wild. But I do stick to making areas and conversations as they happen and don’t jump about. If I did I’d be stuck with loads of unfinished interiors because I couldn’t face putting in all the placeables and lights then I’d have to sit down for days doing the thing I like least about module making.

@Tsongo - Well, since I hardly quite know how to make areas (especially outdoor ones) (similar to you with scripting, perhaps), I only ever use prefab areas that I edit a bit (sometimes quite a lot). I’ve only made one area from scratch in my life, I think, in my 4th module and that was very basic (Ok, in my sci-fi module I’ve made about 2 inside areas from scratch out of necessity, and they don’t look that good), so that doesn’t distract me. Sometimes there are still a lot of work putting characters in areas and creating waypoints making them walk around, and of course all the triggers and whatnot.

I’d much rather make outside areas and find making them faster than interiors because of all the placeables and lights.

Here’s a tip if you see in any of your prefabs a group of placeables you like. Select them all, right click, make them into a group with a name, then export the group ( to your override not the prefab folder ). Next time you open the toolset they will be in the prefabs.

That way you can now put bedrooms where kitchens were and things like that giving you more scope with the prefab areas and it’s really fast.

@rjshae helped with making a Ghostly Light(4) without all the metal, so here’s how it looks now. I used a static camera like you said, @Tsongo. 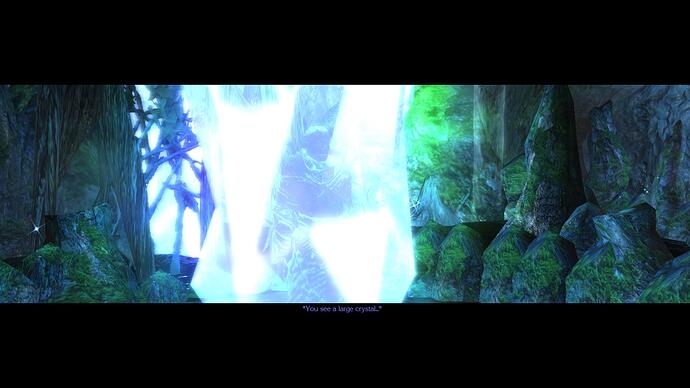 Looking good… Not for the poor person stuck in it of course !

Should you care to colour your crystal to an orangey yellow you could claim they were embedded in amber… Good source of extinct creatures for resurrection.

Wouldn’t that work only for dinosaurs?

That didn’t go according to plan did it. Maybe andgalf’s frozen person’s going to go Jurassic park on everybody !

While Jurassic Park is an obvious thought, I was actually inspired by a very early Green Lantern storey. In it the only Green Lantern of Earth at the time (Hal Jordan) defeats Sinestro and shrinks them before encasing them in amber.

Ok, well, I have no intention of making it amber.

I want it to be a magic crystal kind of thing. It’s supposed to look like something of a magic prison, perhaps like the one for general Zod and the others in Superman II, or something…

Darn! Another weird problem has appeared with this. I thought I had it figured out, and I want this crystal gone at one point, so for that to happen I needed to make the crystal not-static and when I changed this, for some reason the crystal is no longer transparent. How is this possible/connected? Why is NWN2 always so weird when it comes to certain things…

Well, when I took away the appearance special effect altogether (don’t know how much that really did in this case) the man inside the crystal became almost as visible as before. I added another light and experimented and I think it looks ok now. The light fluctuates a bit so sometimes he’s not as visible, but I think you still can see him in there so it will have to do. With the appearance effect on and setting it to not-static he wasn’t nearly visible at all…

Here’s how it looks now. It will have to do: 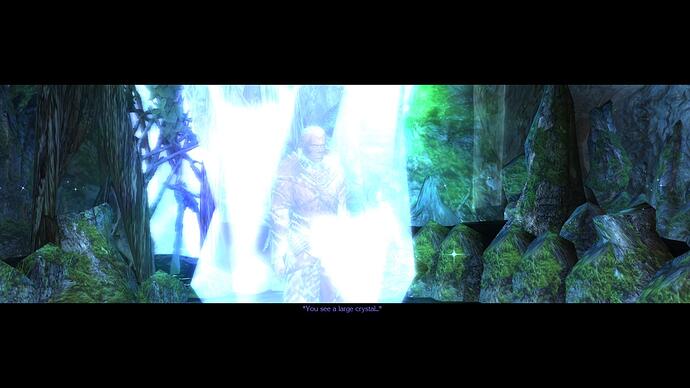