I have a bad guy whose lootable corpse contains a book.

This is set up in the toolset, with no scripting.

However, in one instance recently, after the guy was killed by a spike trap, I had to leave his corpse for a few minutes while dealing with other foe in the same area. His corpse was still selectable, but “had no items or gold”.

This was in the latest Development release but can’t easily be reproduced.

I remember that a lootable corpse bug was reported back in 2018 but subsequently fixed.

Has anyone else seen this issue in the Retail release?

I actually had that happen to me like four times too (different occasions). I had made heads to turn in for a bounty I put in two monster inventories (marked as droppable) not show up for looting even though they had been lootable before…the heads just were not there. So I too have seen this glitch.

I’ve seen this issue twice. In both cases the lootable corpse was clipping into a tile feature (case A) and a static placeable (case B).

What has happened to me is that, using always the same creature… 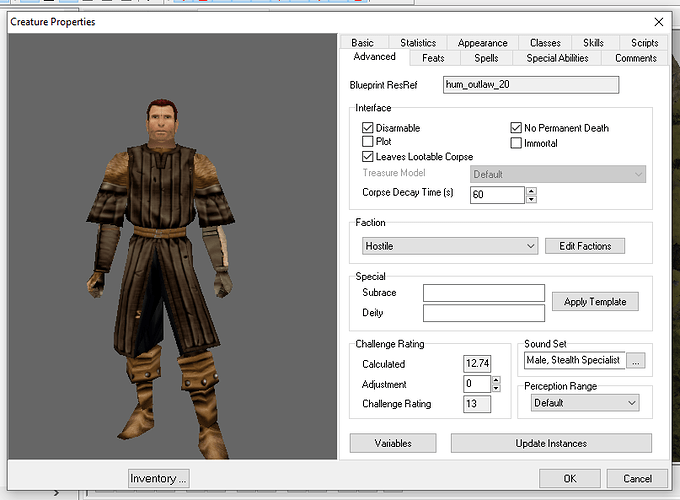 …if painted in the area, the lootable corpse remains until looted, and the corpse desapears after 60 seconds. => OK

…if spawned through vanilla encounter system, the lootable corpse remains until looted, and the corpse desapears after 60 seconds. => OK

…if spawned through NESS, the lootable corpse desapears after 1 or 2 seconds. => NOT OK (I’m not using any NESS corpse options)