So I just finished NWN 1 and I’d like to make changes to the original - I like that and the Underdark campaign the best.

The OC does not appear to have OnModuleLoad script, so I just create a custom one to adjust the maxhenchman right? And also moving them from module to module.

I dont quite understand this;

how to modify the official x0_i0_henchman file?

The big problem here is that the henchman include, plus most if not all the henchman-related scripts, got changed since the OC. Updating them to HotU-level might be fairly extensive work. It’s an ambitious sort of project, if you’re still a NWScript newbie.

When trying to open a script, hit All Resources (green arrow), then type in the resource name (blue arrow). 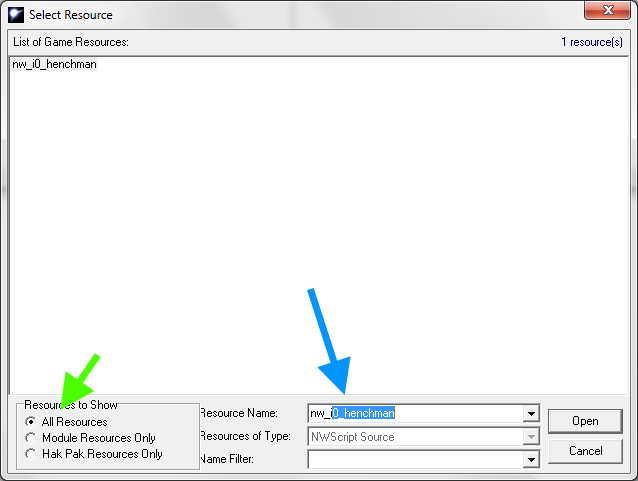 But if you’ve got the OC module open, you’ll be opening the old version of nw_i0_henchman.

You’ll probably want to grab both versions, the OC one and the HotU one, to compare to one another, see what changed.

IIRC the hiring scripts in the henchman dialogues remove the existing henchmen on hire, too, so those’ll need to be altered as well. Floor triggers etc are likely not to be set up with more than one henchman in mind, either. hm.

Found this, too, but the comments make it look like it isn’t working.
https://neverwintervault.org/project/nwn1/hakpak/more-1-henchman-oc-override

Well, it keeps saving into the current module, so I guess its not working right…

How do you mean?

What’s saving into the current module? Modifications of nw_i0_henchman? The OC module itself?

I’m pretty sure it’s intentional that the OC modules, once loaded, save as separate custom modules. It’s not the best idea to overwrite originals, if it can be avoided. Need backups to revert to in case of severe mucking-things-up. ^^

I do have a backup folder just for all this.

Maybe lets try something simpler; importing evil aribeth and the deva as henchman into the OC. How to find the methods?

I rather like the bloodthirsty aribeth and the giggly deva.

I’ve tested it just now, and it looks like you can set up a creature blueprint in the toolset, install it into the override folder, set up a matching “hire” script that spawns that creature and hires it as a henchman, then run that script ingame via dm_runscript.

Still liable to be buggy, though. The campaign modules just aren’t set up with this kind of thing in mind. If you’re strictly after having a decorative henchman creature follow you around, though, then this might do. 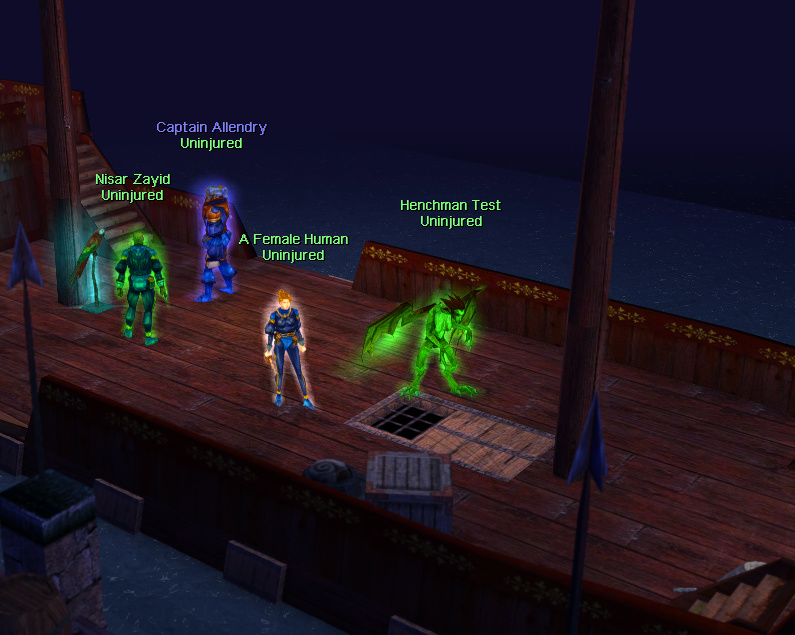 For pulling this off, create a creature blueprint in the toolset, go to the modules/temp0 folder, take the blueprint .UTC and place it in your override folder.

Set up a script that uses CreateObject to spawn the creature, using the blueprint, at the caller’s location, and uses AddHenchman to hire it. Extract the .NCS version of that script from modules/temp0 and place it in the override folder as well.

it works but in a weird manner, it lets you hire all the henchmen, but they replace each other, so the PC is stuck with only one.

Can your method be used for imported characters?

The default scripts for hiring henchmen in the OC include firing the existing henchman. It’s probably not related to the SetMaxHenchmen increase there at all.

It’ll work for anything that has a creature blueprint, so, if you export the blueprint of a creature from one module, and install it via override, it should make them able to be spawned in via the runscript route - accessibility of other stuff notwithstanding. If the appearances.2da in another module has a different appearance on the line the blueprint is referring to, for instance, it’d look different. So, not a flawless route either.

The default scripts - how to find them?

Am trying out your test method too.

There are OC Chapter 1 henchmen hanging out in City Core: Trade of Blades. Open the module in the toolset, open the area, check the conversations of the creatures, see which scripts are linked to which dialogue nodes. If you find the node for hiring them, there’ll be the hiring script linked to it.

Gives a warning that its ingame script and saving the script will make the module use it instead of the ingame one.

So all conversations have to be modified?

It’s fairly likely that they all use the same script, so if you modify the script, it ought to automatically apply to all conversations that use it, but it’d probably be a good idea to give them all a look over anyway.

No guarantees that it’ll work, though. As noted, the entire henchman include file got altered since the OC.

all scripts have nw prefix, so no go?

There’s no reason to let that prefix stop you from modifying them. Mess about with it.

You’ve got the originals to revert to in case anything gets seriously mucked up. Experimenting is a very good way to learn.

I think those ones are unrelated to the hiring process, though. AFAIK the hiring scripts are all in the conversations.

hrm yup lets do some digging.

the nw is missing int nCountHenchmen, wonder where are the henchman limit controls, since the x0 has it.

The OC uses rather strange method of henchman, cannot find any henchman function in nw scripts…

Darn this is getting so complicated… can anyone help make multiple henchman work in the OC?

I guess I went a little too far and now while its building module it says lots of missing things. Pulled out the backup and will start again.