Mecheon Slams His Head Against Tilesets

So. I’ve a confession.

I’ve always wanted to do things with tilesets for a long, long time. Heck, I even offered to help out the CTP at a time. But unfortunately, well, practically every attempt I make at trying to do a tileset ended in flames, horror, and inexplicably managing to break the itp files somehow. So uh, sorry about that one Bannor.

So today begins’s Mecheon’s new quest: Figuring out how the heck to bend tilesets to my will. And with that? Updating a bunch of old tilesets that I’m a fan of to have more Stuff in them, and refresh them for a new audience roughly a decade after some of them were made. And so begins Tileset and Revivify: Mecheon Pokes and Revitalises Some Tilesets

To begin with, I’m working on one of my favourite tilesets: The CTP Black Desert. A bit of an odd one in the CTP, I’m hoping to update it with…
1: Helvene’s excellent Oasis and Stream tiles
2: More crystal trees. The giant tree from the City tileset (A favourite for forest conversions), the tree over the road from one of the jungle sets, stuff like that. This is for selfish module related reasons, and also because I really just want a crystal forest
3: A bunch of elven buildings that have been in quite a few forest tilesets. Once again, because of entirely selfish module specific reasons, and also to have a crystalised elven village because they get off too well some days
4: Dunes, and raising/lowering of tiles
5: Possibly Helvene’s improved Rural trees, albeit crystalified and then further modified with Shadooow’s improved road tiles. Possibly. I’m not sure if I want to go that crazy with the crystal trees that you can get lost in a forest of them, but its certainly an option

90% of making these is coming up with names, so naturally the update to the CTP Black Desert is called Black and Ash: CTP Black Desert Overgrown, due to me spreading the crystal tree seeds all over the place. And, well, here’s how its going so far 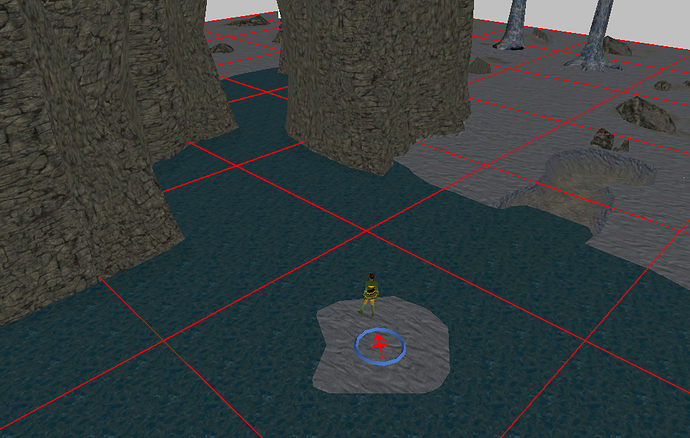 I woiuld have an ingame shot, but well, that skinmesh vanishing bug is still being a bit of a thing and I’m trying to find what causes it, given Cheryl Waters (The Warchef) there can sometimes get her armor to reappear by jumping between different areas and back, but whenever I screendump, vanishing skinmesh bug. So. That’s still a thing to fix. But it works and the ITP isn’t too broken

I think what I’d really like to use is a comprehensive interior tileset with many different wall/floor and corridor types, including “secret passage” corridors, where the floor types are largely unfurnished and furnishings are available as single or group tiles. Like tile groups for fireplaces, really tall windows (for building cathedrals), walk-in armoires… stuff like that.

Or an “earthy caves”-style expansion of the beholder caves tileset. I also like floating or cliffside platforms, to place archers on, and altars and columns - square or round columns with walkable tops, at different height levels, for jumping and climbing. I think many of the older tilesets could really benefit from some bushes and undergrowth, too.

But, as usual, the sane advice is to go with what you want to have made. You’re not getting any of the time you’re spending on this back. Many of these tilesets are considerably outdated, and may yet become moreso if Beamdog start bringing out new tilesets. So do the thing you’ll have the most fun doing, and learn the most doing.

PM me if you want constructive criticism on something, anytime.

I like that tileset, but haven’t done much with it because I suffer from a bug with my ATI wherein all alpha layers become transparent. So, crystals look funny; Frozen Wastes look terrible. Mines and Caves Crystal features look terrible. NWNEE fixes all this so I maybe I’ll revisit - I’d be curious to see what you do with the CTP Black Desert though. I’m always interested in tileset to play with (I have so many old layout sketches lying around in various states).

There is an Earthen Tunnel reskin of the Beholder Caves around (this might be it, not sure, my search foo is weak on this vault: https://neverwintervault.org/project/nwn1/hakpak/tileset/earthen-tunnels ). I keep finding the NWN2 version of this when I search (the lava tubes tileset for nwn2 is coming up on searches)…

I have a version of that for NWN1 on my HD wherein I’ve added Shadooow’s Raise/Lower feature (again, from Beholders). I haven’t seen much else done with that tileset, though I’d be interested if you knew of stuff somewhere.

RE: Other projects, I’ve also got a hacked up CTP Babylon on my machine wherein I’ve cloned most of the water features to make blood river features for a fiendish environment. The same work adds metallic reskins of the CTP pyramids to make metallic ziggurats inspired by Pazunia lore. I can’t stand most of the modelling tools, and have zero hope of creating much new stuff, but I can clone, reskin and integrate compatible stuff like a pro, lol. I do all my modelling in text editors by hand, by CleanModels, or by search and replace.

BTW, I was integrating some of your robes in my personal setup over the Christmas break. I stumbled on your tutorial in one of the monthly CCCs (noble stuff?) on how to roll your own robes. I hadn’t realized your writeup was burried there instead of being posted separately, but now I do - thanks for writing it up. I had given up on figuring out how to edit PLTs, but may revisit.

@shadguy
Thank you for the link! That’s pretty much exactly what I’ve been looking for. I don’t know of any “real” tile expansions for Beholder Caves either. :-/ The CEP has extra colorschemes for it, but it’s not… quite the same thing as what it’d really need, like roofs, and Floor, Water, and Pit terrain types.

And yer welcome! If you wind up making some robe retextures - upload them! I’ll get a giant “Project completed by proxy! Effort cost: None. Result: Neat stuff!”-boost out of seeing that. Poke me if the PLTs are giving you any trouble, or if you want to give Blender a(nother) shot sometime. It’s got a pretty steep learning curve because you’re pretty much helpless until you’ve got the keyboard shortcuts memorized, but it’s really smooth to work with once you do, and the power to make (or import) one’s own assets in whatever way one likes is just priceless.