Greetings everyone. I seem to be struggling with the minimaps for the LoW’s Mirkwood v1.6 tileset. I get a large number of white blocks appear on the minimap. Figuring that I’m missing some files. I added his older wrm_mirkwood.hak into the hak order which eliminated most of the white blocks on the minimap, but I still have a few strays. Does anyone have any experience or insight into this? Here’s a pic for an example: 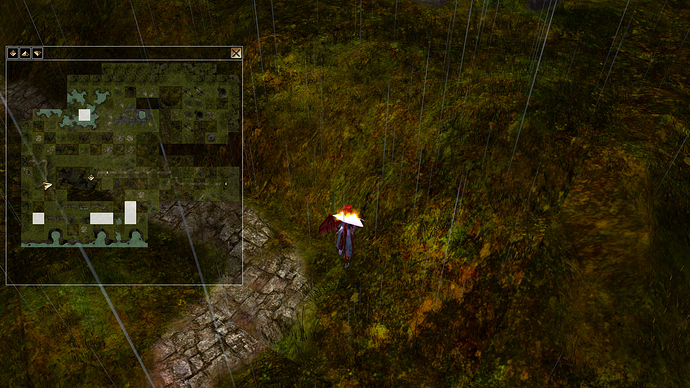 The missing minimaps can be extracted from the Seasonal Forest tileset. No need to rename them or anything. I’m pretty sure it’s an oversight, as LoW was using both tilesets together and probably didn’t notice.

Thanks for the reply, Symmetric. I suspected those files might be in the Seasonal Forest v10.hak, so I’ve been running it with that installed into the hak list. So in the picture taken above, that is with the Seasonal Version Tileset. I think the order of precedence matters, and I’ve tried a number of combinations. Are you suggesting I extract those files listed above from the Seasonal and then inject them into the Mirkwood v1.6?

For what it might be worth, this is the semblance of the hak order: 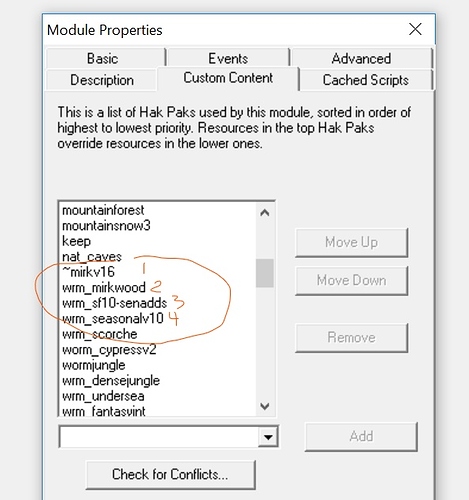 I had a closer look and I was wrong. Actually, the latest mirkwood 1.6 (~mirkv1.6.hak) uses ONLY minimaps from the Seasonal Forest. It has none of its own. However some of the new tilesets minimaps still point to the old version of the tileset (wrm_mirkwood.hak).

You can still download the old version from here: https://neverwintervault.org/project/nwn1/hakpak/lord-worms-tilesets-and-arbor-falls-pw-server-haks and copy the mi_wms01_* files over to the new hak. However they will have a different color.

(Funny enough the list Iist I gave you previously came from the version of the tileset, which apparently also had missing minimaps)