I’ve got what I believe is a simple problem but I can’t figure it out. I’m using the Creature Pack to put some giant snakes and stirges in a module. They show up in the toolset however they disappear in the game. Any ideas?

Did you use an existing blueprint, and changed the appearance? Or maybe the blueprint provided in the Creature Pack has made them invisible.
In that case, it could be they are “script hidden” (see the properties, under “Behavior”, a few lines before “Miscellaneous” [or equivalent, I’m using a French version of NWN2]).

Thanks. I’ll take a look at that tonight. I don’t believe I did that but one never knows.

Something else worth checking: do they have at least 1 HP? If they’re dead, the time to load the area could be enough for the body to disappear (of course, I don’t really think that’s the case, but let’s get rid of the reasons easy to check first!)

Do they have any SEF attached that may be having an impact? I noticed the stirge (which I am also using), had a “geltrans” SEF/VFX, which made it semi-transparent. I’m not sure why it would be there, so I removed it. (It was there in the version I had imported anyway.)

As for the snake, check the model it refers to in the 2da. It has been a long while since I looked at these for setup, but if I recall correctly, I had two snake refs in my 2da and one did not work correctly … or well at all. Furthermore, if it is too small, the model can disappear “beneath the ground”.

Another thought just occurred to me … Make sure the hak is not too big, as I had the same problem with missing placeables when the hak was too big. (app > 1.5 GB)

Of course, it may be something a lot simpler than that, but that’s a couple of possibilities too.

I think I will just avoid having these currently as I have replacements I can add. It’s an old module and there is a lot of “junk” that I have to clear to do a proper check. I’ll just use stock so I can finish it up.

I suppose the Creature Pack you’re talking about is this one (compiled by Kamal, thanks to him for this work!)

With an empty override, here’s what I’ve got: 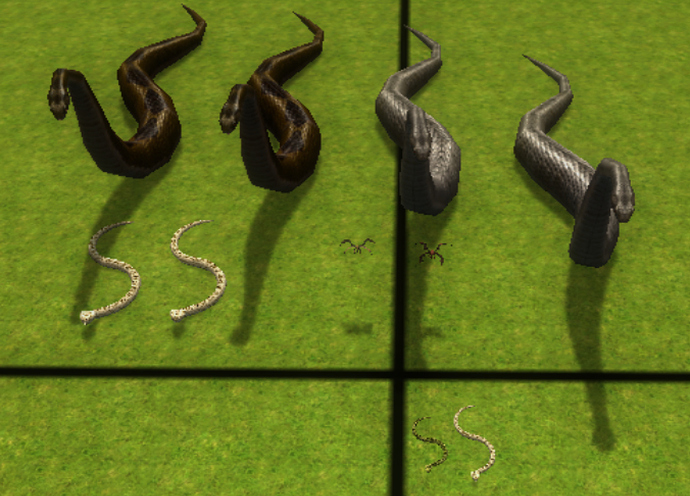 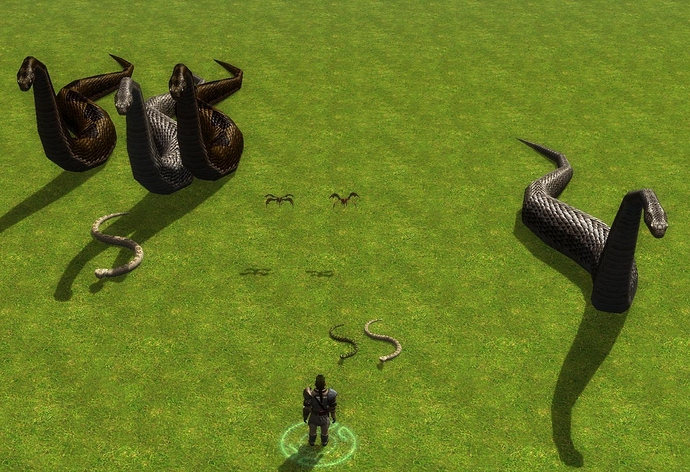 I made all these critters friendly (so they wouldn’t attack the PC) but forgot two, and when I entered the area the first time, one was already missing and I just had enough time to notice the other one disappearing (probably because it just died).
Could it be a faction issue then?
Apart from that, all I can think about is a conflict between two appearance.2da files (but why would the toolset choose one and the game another one?)

@4760 I had never seen those before! (I mean the big black snakes). Thank you for bringing them to our attention. And thanks to @kamal t the same time. And I also hope that @Sawdust37 can solve his problem at the same time. These problem solving are sometimes quite frustrating.

Yep . . . that’s the one. I was curious, like you said, why would the toolset choose one and the game another (if it was the 2da).

However now is not the time to delve into the mystery I think. This one was started maybe two years ago and has a ton of excess files lying around. I just wanted to get the last couple of areas done with the least amount of issues.

If anyone has ever seen this happen let me know for curiosity’e sake.

It’s an excellent download. Kamal did a fantastic job!

I did a little more investigation and found the appearance on the main tab in properties was different from the appearance on the “basics” tab of properties. When I changed the basic tab appearance I got a dire bear when I should have gotten a giant snake. I assumed there had to be a loose 2da file around as 4760 said and found one. One was from the “Riding Horses” mod and the other from Kamal’s Creature Compilation. Both had the creatures but they were on different line items. So I stuck with the smaller of the two and voila . . . they are showing in both.

Thanks for the insights and discussion.