My game got bogged down last night and in researching the problem I discovered that the module archive in the save folder had nearly doubled from about 50 mb to over 100 mb in about 20 minutes of play.

The one thing I noticed is that the remains did not decay after they were looted meaning the save game now included an extra hundred or so objects in each area. Could be a thousand or more additional objects for the module. Would that be enough to cause the file bloat and slow behavior I’m seeing or should I look for another cause?

Could be a thousand or more additional objects

have a look at exactly which files are bloating perhaps. Winmerge can compare 2 save-folders, and be customized to show file-sizes

It’s the chapter two module archive file “RotLT Chapter 2.Z” in each save game folder that is bloating.
I’ve been in Ch2 of Raiders of the Lost Tomes for a couple of hours and I can see this file getting larger with each save. I’ve had a lot of crashes so I’m saving after every journal update, area completion, NPC convo, and every fight. That’s definitely the file.

Since I entered this module the save folder copy of that file has gone from 7 mb to 103 mb. I also just opened it in the toolset and got a string of end-of-file error messages. So perhaps there is something corrupt in the module itself?

in contrast, am halfway through SoZ : my earliest save on the intro-ship is 27 mb (1 module saved) and my latest on the Sword Coast is only 43 mb (5 modules saved – 3 of them are very small dungeons on the OL).

If you have the patience, you could unzip the .Z file using 7-zip and extract the “-” file. The “-” file should load in Tani’s Nwn2Packer, and show the files inside (it’s basically an .ERF or similar).

And after extracting the files of 2 saves (to temp folders) you could compare those in Winmerge … it should give a better idea of what’s going on inside the Z archives.

So what does the .git file do? As I play though each area, the associated .git file in the save archive grows dramatically. The largest is now over 1 gb when extracted from the save.

I also paid more attention to the error messages when I opened the mod in the tool set. Most were out of range errors related to blueprints. That might support my theory that the blueprint for the spawned kobold mobs could be corrupt in some way.

This pages lists all of the file formats for Neverwinter Nights 2.

GIT - dynamic area information - game object instances (placeables, triggers, creatures, etc) and sound properties in the saved area. The remains are instances too, so it explains why the saved module file (*.Z) increased in size. Maybe you messed up with creature blueprints somehow? There’s Lootable Corpse flag in each creature blueprint’s properties.

While creatures carrying inventory items will produce lootbags by default (for performance reasons), every creature has a lootable corpse flag that can be set by the module builder. If it is, the creature body will not decay. [1]

While creatures carrying inventory items will produce lootbags by default (for performance reasons), every creature has a lootable corpse flag that can be set by the module builder. If it is, the creature body will not decay.

Thanks! I looked and the decay flag for the corpses is set to False. If those blueprints are also the source of the file errors, I have a good idea how to proceed.

btw,
.GIT files can be viewed (and modified) in TlkEdit2 … but saving them back into a .Z archive is an iffy procedure

it’d be easier to write a script that cleans each area IG (if it’s the corpses) … but regardless, whatever’s causing the blueprint error should be found & liquidated first,

I’m hoping it’s a creature blueprint which cuts suspect pool greatly. There are also a large number placeables with custom scripts attached and a couple of triggers that generate an invalid geometry error when I verify the mod. Detailed investigation may have to wait for the weekend.

I think kamal_'s been through this, and it was a matter of moving blueprints out-of-the-way and re-opening the toolset till the error(s) went away …

Well the plot continues to thicken. When I open my toolset to try to track down the problem I get an error message before selecting the module I want to load. (I took the screenshot after I loaded the module but the message is the same.) 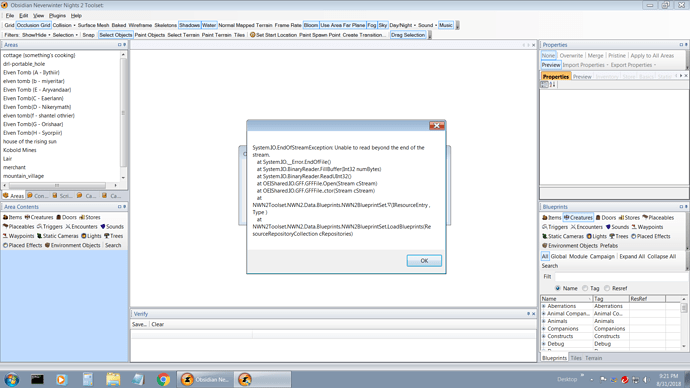 The real WTF moment came when I reinstalled NWN2 and still got the same error!
Do I have to delete everything and then reinstall?

More info. I opened the .git file in Notepad++ (which I don’t really know how to use) and learned that there are over 1100 instances of placed creature corpses in the file. However the file itself is now over 800,000 lines long. Much more space than those body bags should take up.

Ps. I suggest ignoring the .git until the toolset behaves nice without a module loaded

You’re a genius! I didn’t realize the toolset even looked at the Override folder.
It’s getting late but that cuts the suspect pool down to about 20-30 files.

The following blueprint files are corrupt in the Raiders of the Lost Tomes campaign folder:

FYI, when you save a mod, all of its blueprints should have their time tag set to the current date/time. If any of the blueprints don’t have the current date/time after saving, they are likely corrupt. This is the case with the above files.
The best way to check the time tag is to open the folder in file explorer with the “details” view. Then sort by file type. It should then be easy to find out which files do not have the same date.
Blueprint files are all the UT* files (UTP, UTC, UTI, etc).

It’s likely the c_kobold_corpse.utc that’s the main culprit with nearly 900 instance in the save game. I’ve created a new set of kobold blueprints that decay after looting so that one at least shouldn’t be a problem.

Thanks for the help everyone!