As some of you who frequent Discord probably know, since my return, I’ve been working on finishing up a module I was working on back in early February when I took a hiatus. Well, to be honest, it hasn’t been going very well. As is typical, I get sucked back into Custom Content and make little actual progress on the module itself. Then, as time passes, I lose interest in the module.

So, I’ve decided to start fresh and this time, I’m determined to FINISH it. But first, I had to determine why I never finish modules. Well, once I gave it some thought, the answer wasn’t as complicated as I thought. I get sucked into custom content creation/fixing/modifying and eventually reach a point where I get sick of making/fixing/modifying said custom content. Secondly, unlike when writing a module for pnp, I have never approached toolset module design with a written plan or overview. Time to remedy that and get back to basics.

This is what I’ve come up for the hook…

The year is 1375 DR. The Zhentarim force occupying Shadowdale has been cast out, its commander slain in the fighting. Broken and leaderless, the remaining Zhentarim soldiers have scattered.

You were part of that occupying force, an unwilling conscript in the Zhentarim’s quest to dominate the kingdoms of the Moonsea. Alone and lost in foreign lands, your desperation grows as the icy claws of Alturiak dog your every step, sapping the strength from your body. Finally, after several days wandering the wilderness, you see the lights of a small village in the distance.

So, its going to be set in the winter and the PC is going to be starting out at 1st or 2nd level. I have a pretty decent sized dungeon layout I really like, so I plan on using that.

This brings me to my first question (well its really two)

The horse system is very convoluted if not even buggy at times. Some people still like it. Personally I think if I decided to use horses I’d be drawn into fixing/improving the riding system and at some point get so bored by it that I’d need to put modding aside for a while and maybe play say a Tomb Raider game of which I own nearly all, but haven’t even played half. Damn, I own so many games I never played including a lot of GoG giveaways that I might never play because they aren’t the right kinds of games for me.

Damn, I own so many games I never played including a lot of GoG giveaways that I might never play because they aren’t the right kinds of games for me.

The commander of the Zhentarim force occupying Shadowdale has been cast out, its commander slain in the fighting.

Did the commander get cast out or killed? Maybe both

Definitely agree that having a plan before hitting the toolset is important. And even then that’s not going to ensure module completion

Did the commander get cast out or killed? Maybe both

Whoops! All fixed now. Ty for pointing that out.

If you need horses just to facilitate faster intra-area travel, consider adding some speed-enhancing items. Like boots that can cast Expeditious Retreat or “Lesser Seven-League Boots” that provide Haste but also huge nerfs for combat & casting, making them useless for anything else than movement.

I guess I should get to work on my projects too.

The issue with horses is less about bugs (in SP at least), more about complexity and purpose.

Horses look cool, if course, but, once admitted, every scenario needs additional sense-checking, e.g. henchmen can identify items, climb ropes, dance, teleport instantly… except when they’re horses or mounted. Prepare for lots of scripting - but all of these issues can be overcome.

I’d say, if you want horses, be very clear what they’re for. AC or HP bonus, maybe, but that’s only useful for outdoor combat. Faster travel between areas, perhaps, but players don’t always like timed quests. Leaping fences or chasms, possibly, but it’s not easy to think of many cases.

Bear in mind that the player has the frequent overhead of hitching and mounting if they need to take horses through the entire module, so there needs to be plenty of fun to offset that.

If you need a working example, I’d recommend jumping straight into Enigma Island 3. After the opening scene, ride to Koberg and talk to the King. You’ll see some fairly slick party mounting, fast travel, hitching so you can enter the castle, remounting, stowing the horses on a ship, and so on. Was it all worth it?

Still trying to answer that question for my latest module…

Snagged a few screenshots of the first area. Tiles are all set, time to start adding placeables. 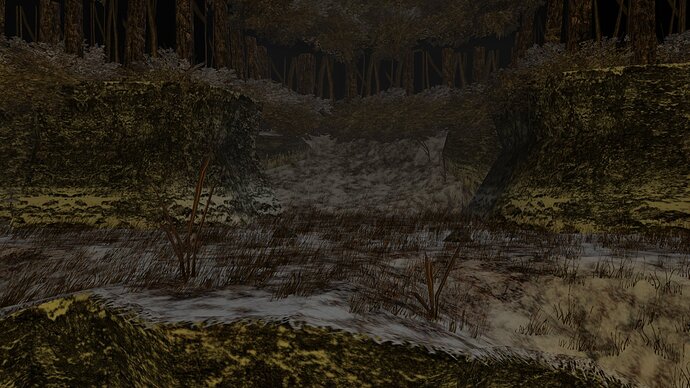 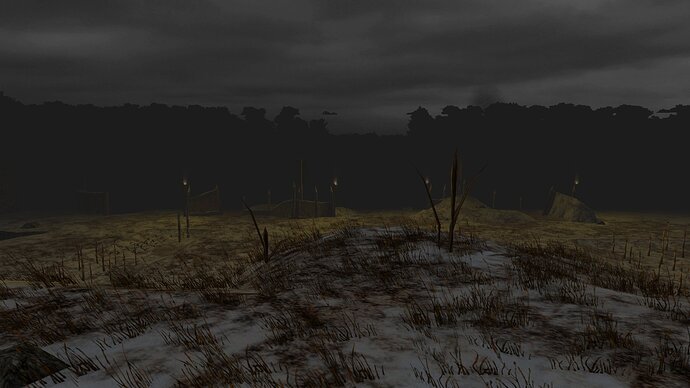 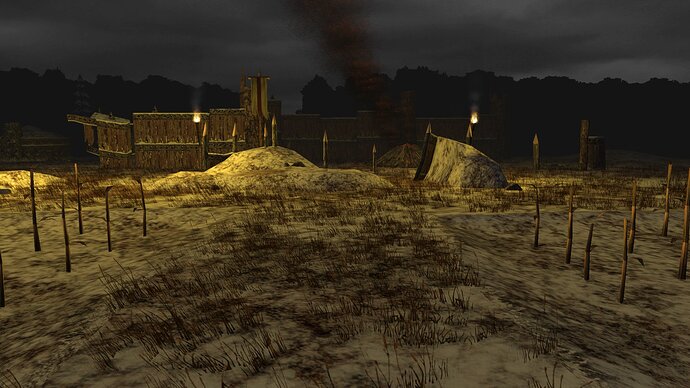 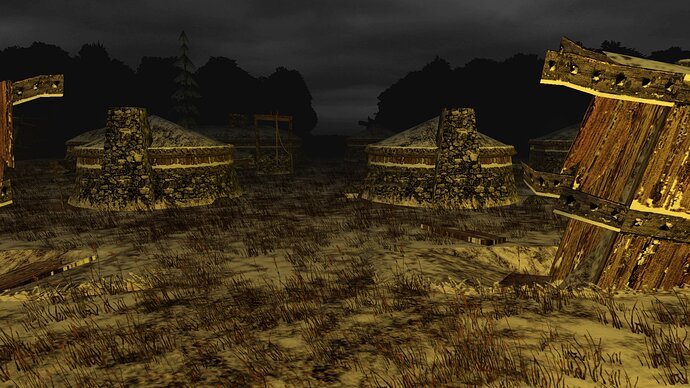 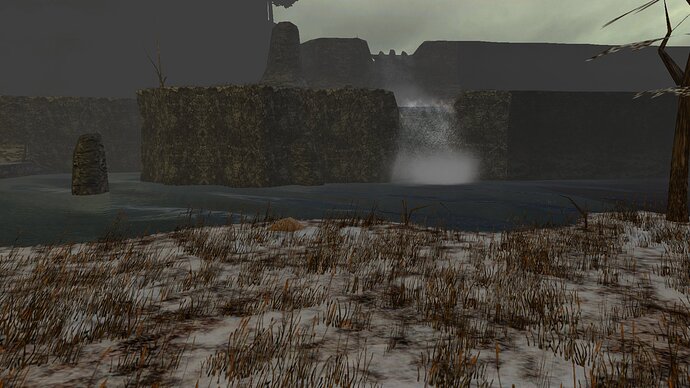 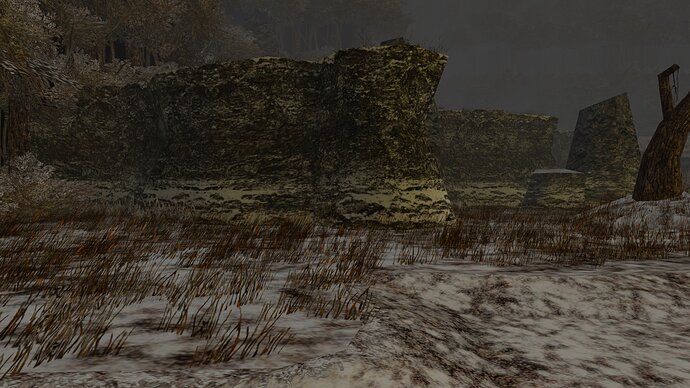 My suggestion is to find other peoples interested in collaborating. Possibly host your PW if it is PW online so you get some feedback even if it might mean the players will lose interest very soon. Or seek for players who would test what you have and gave you feedback.

If you stay the sole person working on this, burning out is almost inevitable… Been there myself several times and I saw it happen to many peoples as well. Thorought the years I was contacted by dozens of peoples making their own PW and asking me for help with stuff. Yet none of them actually finished it, they all disappeared leaving nothing behind.

Not that is is easy to find other builders willing to help. Everyone seems to have their own ideas and they aren’t willing to make any concessions to their dream. Lowering your expectations and join an existing PW closest to your dream is the very first thing I recommend. Nobody has taken my recommendation yet though.

Obviously, this applies to PWs, if you are building SP module then you cannot join an existing team (though you might try apply to that new Premium module development

Good solid suggestions, but more beneficial to someone working on a PW as opposed to a SP module like I am, which is something I should have stated in the OP.

I don’t feel burn out is inevitable, at least in SP module development, if you’re moving forward with a solid plan. Over the years, I’ve written plenty of content for pnp - some even published, but never applied the principles I use writing that content to making a NWN module. Granted NWN modules have a lot more depth, but I’m finding that the design process is basically the same.

So far the biggest hurdle I’m facing is that I have a specific vision for how areas should appear and, as is typical, the vanilla assets aren’t very good at displaying that vision. Thus, I’m inevitably drawn into CC creation to make that vision a reality. However, this time I’ve decided to limit my CC creation / appropriation to that which is absolutely needed for my module. Rather than dive headlong into CC as in the past, I stop and ask myself, “Is this content really needed?” If the answer is “no,” I grit my teeth and move on.

I’ve found over the years that, for whatever reasons, full collaboration doesn’t work well for me. I’d much rather just forge ahead on my own, getting targeted help when needed, which the Community is more than willing to offer.

So, at this early stage, I’ve decided to not use horses as they really won’t add anything to the module. If desired, I’m confident I’ll be able to add them later as a) the module is small, and b) there shouldn’t be too much that requires specific scripting to implement them.

On a different note, I’ve stumbled into a recipe based crafting system thanks to how the module begins. However, rather than implement it via the crafting menu, I’ve opted for implementation through kit items. First item I’ve designed is a “mortar and pestle” that when used, calls up a conversation that allows you to choose to craft certain items based upon ingredients in your possession.

So, I’m setting aside the crafting recipe system until I can figure out what to do with it. After spending several hours today working on just one recipe conversation, I’m not really sure it adds anything to the module. Granted, it was an interesting side trek that taught me a lot about scripting parameters.

Tomorrow, its back to the plan, which is going to force me to rethink the beginning slightly. I originally intended to give the PC armor with a custom robe bearing Zhentarim insignia which they would have to modify. The modification would be facilitated with a set of dyes the PC would craft using a mortar and pestle found in the first area. While it sounded interesting and unique, I came to the realization that there are far simpler ways to modify armor without dying it - tearing off insignia for one. Considering the background developed for the PC:

You were part of that occupying force, an unwilling conscript in the Zhentarim’s quest to dominate the kingdoms of the Moonsea. Alone and lost in foreign lands, your desperation grows as the icy claws of Alturiak dog your every step, sapping the strength from your body. Finally, after several days wandering the wilderness, you see the lights of a small village in the distance.

It became obvious that the first thing the PC would have done would be to get rid of anything openly identifying him as a Zhent soldier. So, my first little foray into custom crafting would, in reality, have been done in the background, before the module begins.

So, yeah, after typing that, I don’t think recipe based crafting is gonna make it in the module. Good! I wasn’t looking forward to all that work anyway.

I’m looking for feedback on the invasiveness of the “DM Speaker”. Are the popup windows too much, is it too invasive, etc.?

Currently there is only one completed introductory area and one unfinished area which is linked from the first area. Thank you for your feedback.

You won’t be able to please everyone, but I liked what I saw and thought it was well done, with much care. I think it has the potential to make your module more memorable and stand out, if you stick to this style.

Not sure if I found all instances though? I only got a DM message at the beginning, when equipping a torch and when clicking on a transition. Are there more?

Because the pre-made character I picked at random was a gnome, I learnt that apparently gnomes are too small to wield quarterstaffs. It did not matter with regard to the testing, of course, just a heads up, in case you will allow all races as PC.

That’s a critical piece of information on the gnome. Probably halflings have the same restriction. I’ll have to come up with something for them - club would work.

Yes, you found all the cases of DM Speak - entry, torch, and transition.

Or just change the size of a quarterstaff in baseitems.2da from large to medium and require 2 hands to use.

That would work too, but I’m trying to avoid adding modifications to baseitem types such as weapons that change how they’re used.