Again, I recognise this is likely to be a question that either @rjshae or @4760 may be able to answer, but maybe others may know too. So here it is …

As I have been unable to create a vertical rotating text (or object) along a certain axis, then maybe it is possible to alter an existing rotating placeable object? (I am going to try to alter the PLC_NT_Myrkul_roid04 model.)

I am about to attempt this, but ask if I am about to waste my time if it is not possible. And, if possible, are there certain things I should consider?

UPDATE: OK, There is obviously much more involved by the looks of it, so I will wait any possible advice and continue my search.

According to this post, it looks like I need 3ds Max (6, 7, or 8), but has anyone been able to make new animated placeables using the NWN2 toolset Animation Viewer plugin? It implies you might be able to save an animation, but I have no idea where to begin.

UPDATE: Is it possible to have an invisible “rotating template” GR2 file, which we can simply reassign a model? A bit like an animation cloner that works like the MDB Cloner style programs?

Something like this?
The rotation speed is 1 turn per second, it might be too fast for your needs, but that can easily be changed.

Don’t forget to put the following line in your placeables.2da:

Is it possible to have an invisible “rotating template” GR2 file, which we can simply reassign a model?

For placeables, the answer is no, as the “bones” in the gr2 files are the parts constituting the model itself (so cloning the model will lead to a new name, and the animation won’t find the matching parts and will therefore not work).
It can be done if we make the placeable a creature though (as IADCFT’s blowing flag)

Just downloading and checking now … will report back soon.

REPORT: Yes, that is the sort of thing, but as you say, it would need to be slower and the actual object needs to be a few “symbols” like in the example below … which I currently achieve by a special effect … but it does not rotate …

EDIT: The background also needs to be transparent … like my symbol example - i.e… No grey background. (I can send you the first files as a template if it helps?)

NOTE: It is already possible for me to animate these symbols via script, but I imagine that may use more resources than necessary. i.e. A rotating placeable or rotating effect must surely use less than a constantly updating SetFacing script. 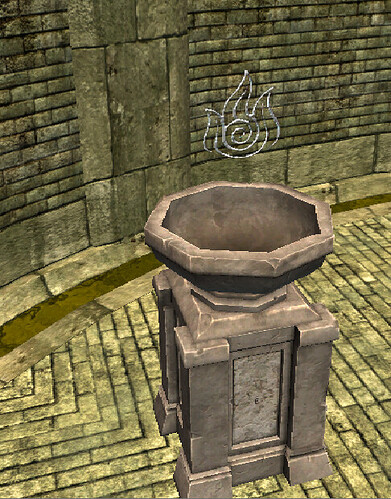 Here is your placeable (which rotates), but I could not “grab” the placeable to move its location, as that crashed the toolset to desktop. There was no grabbing point and so it just dropped out of the toolset when I tried to grab it. EDIT: After reloading and trying to grab it again, I was able to do so. I don’t know if the crash was a one off, but note it for you just in case. 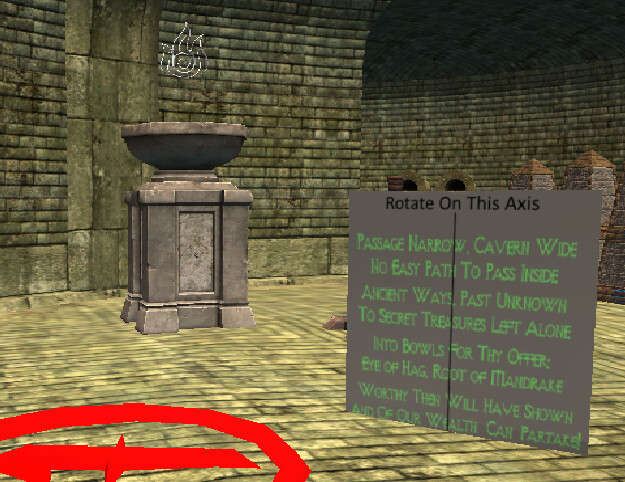 I was hoping that there may be a way to allow someone like me to attach various symbols to the rotating model as I required. I was trying to avoid the need for someone to always have to create a larger number of symbols if it was something I could rename and edit relatively easily … if you see what I mean.

Here are four such symbols I was hoping to animate … 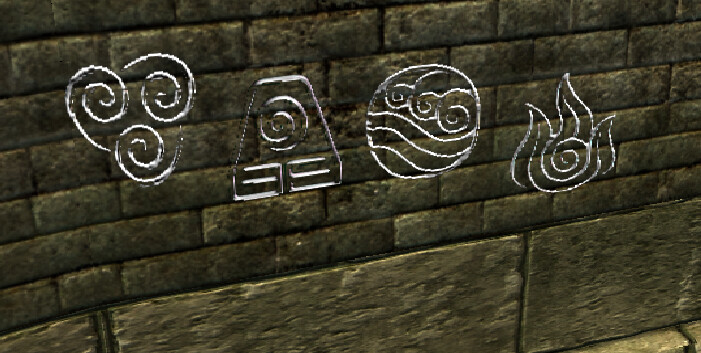 But, there are a number of other variations of a similar type, which may also require colouring on occasions.

However, they are all the same “size” (effectively an image in a small square), so if a small square can be rotated, which uses the same skeleton points - is that possible? Or is that still the same issue as you mention above?

But, this appears to be the sort of thing I need … And for further reference, here is where I managed to make one symbol rotate in the animation viewer, but it is along the wrong axis …

AngularVelocity is currently set at 50, which appears a reasonable speed. 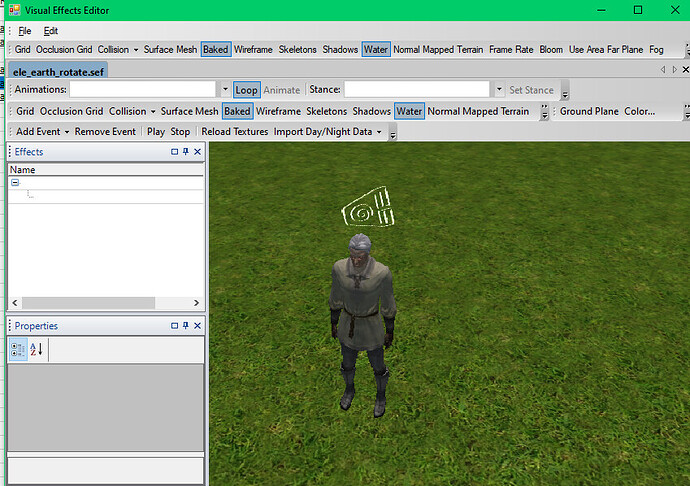 And for further reference, here is where I managed to make one symbol rotate in the animation viewer, but it is along the wrong axis

Same here, I couldn’t find where we can use a different axis. Still looking

It would be cool to find such a fundamental point, as it seems to me.

I did wonder if it may relate to the phi or theta settings, but I had no joy there either. But, it may still be there and I just missed it.

it may relate to the phi or theta settings

btw, phi and theta are typically polar directions … might work

that is, one of them is usually up/down from pole to pole and the other is around the equator …

I thought I had tried every possible combination with then, including 90 and 180 degrees values, on spherical and polar.

But, maybe I still missed a setting somewhere, or I should’ve reset the util after a change.

Hopefully it does exist and just needs finding .

UPDATE: What about a rotating Collision Box? Is that easy to do? Actually, that is what I have used in one of the first screenshots. The flame above the pedestal is a collision box with the fire VFX attached. So, if the collision box could rotate, I think that would solve it.

I know you are still working on this, but I did a little playing around with the files to see what happens…

I tried changing the image in the files you sent, but when tested, the image works, but the “transparent” section is not transparent. Is there a special colour or means to make it transparent … or is this the kind of limitation you were explaining to me? (Does a model/skeleton still work with no attached textures? i.e. Is it an invisible rotating plane?)

As you said, I think the rotate speed needs to be around a third of its current. In the VFX viewer, I was using an angular velocity of 50, but I do not know if that translates to the same thing. However, the same speed as the asteroid placeable is about right. 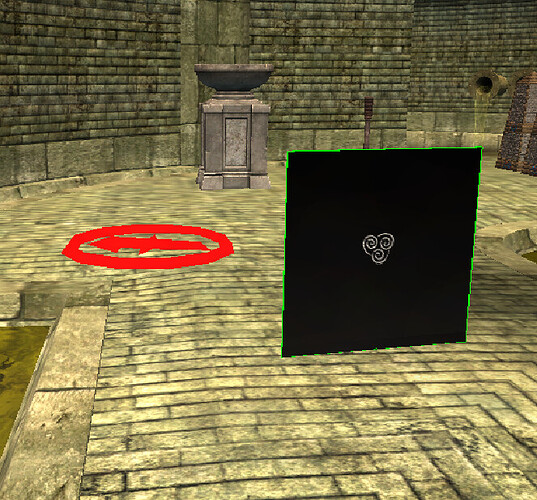 And I don’t know if this is the same result as you got, but the effect did not sit on top of the placeable, but somewhere nearby … and it remained static…

The black plane with the air symbol is rotating, but the attached effect (fire) attached to the rotating plane is coming out of the ground and not rotating …

And just for your info (but you probably already knew this would happen at the moment) I tried using the same textures as the invisible collision box uses, and I get this result … A red plane. 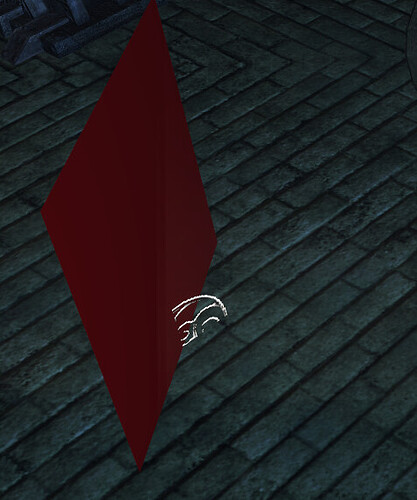 OK, I thought this may be worth a separate post (for less reading) … In the screenshot below I have used a default invisible “collision box” with the VFX attached. It gives the required result, except for two points which need addressing if possible … 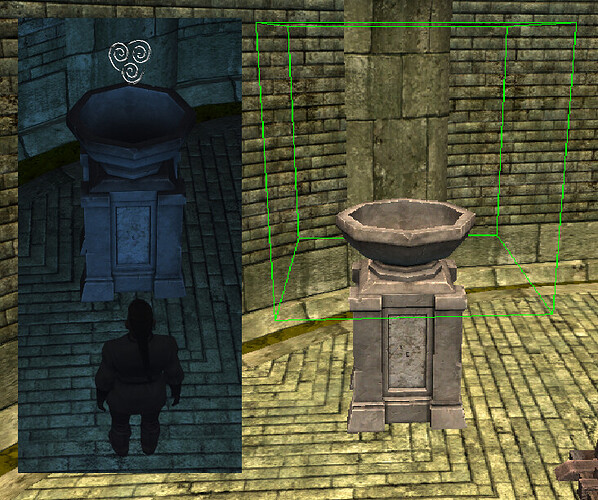 Here is a scripted version … but it is too resource heavy to use practically. 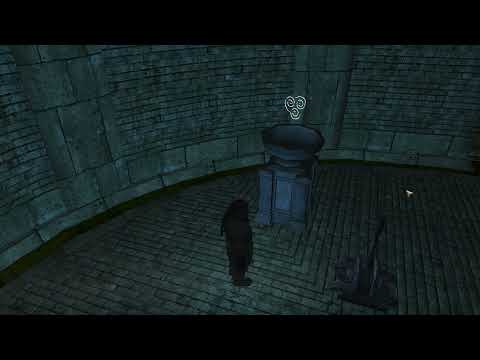 Weird scaling issue … The symbol on the left is within a 1,1,1 collision box, but even though I have tried to “flatten” the symbol in the collision box on the right by using 0.5, 0.5, 0.25, it still remains elongated. I have tried widening the width but that did not help either.

UPDATE: OK, I think I figured something about the scaling … When using 0.5, 1, 0.5 on the collision box, the symbol scales correctly. So it seems the effect is only being affected by the Y axis … if I read that correctly. When altering the X and Z axis, it makes no difference. Only the Y axis is making any impact - and then only in the Y axis. 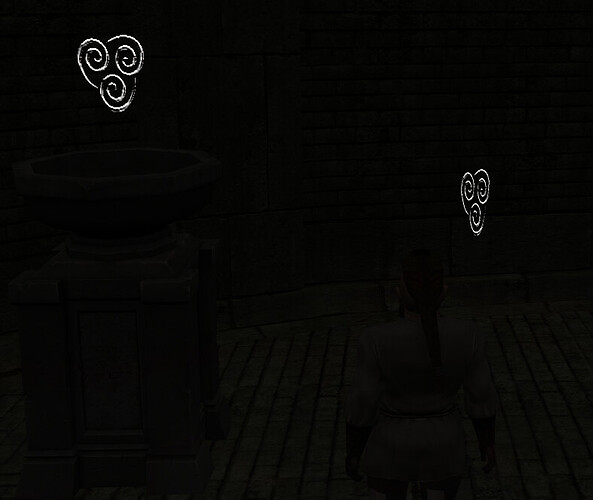 but the “transparent” section is not transparent.

Did you tick the “Alpha Test” box (in MDB Config)? I didn’t activate the alpha channel, so that could be the reason.

So, if the collision box could rotate, I think that would solve it.

Can you make the scale of the new box half scale

Sure, but I suppose the rotation collision box will make this new placeable not that useful

Looking forward to getting hands on this.

What about the possibility of a couple of rotating collision boxes. One at normal size and one at half size … If you are ok with that?

That way we have covered all potential possible situations.

The main reason for the half size was to try to reduce actual collision without compromising the dimensions of the attached VFX when altering the collision box dimensions as it currently stands. See images in above posts.

Did you manage to get that rotating collison box up and running yet?

If an attached VFX rotates with the animated invisible box, I will be able to make good use of it. I already have plans.

Anyway, do keep me updated…

Anyway, do keep me updated…

Will do!
The collision box rotates, it’s just I can’t see any VFX, which means I’ll probably need to add an attachment point in the model.

Thanks for keeping me updated!

Theta, on the other hand, is similar to Longitude.

Note that StartPhi and StartTheta (as well as EmissionRadius) determine the initial position of the effect… The effect then moves according to the set Velocity and Acceleration, and both of those are also expressed in terms of Theta/Phi/Radius.

So we should be able to only use visual effects without having to resort to a special placeable. I’ll keep you posted.

The collision box rotates, it’s just I can’t see any VFX, which means I’ll probably need to add an attachment point in the model.

I’ve got a few more ideas for the hookpoints, but it’s a very long shot, better not to hold your breath…