Noobie needs a lot of help!

Hi, I am trying to rebuild my version of The Hermit’s Chalice that I built years ago for NWN1 for NWN2. I have several areas built, the farm, the farmhouse, a shed, and a barn. The encounters that I have in the shed and barn, small rats, spawn without any problem and act as expected. However, when I try to create encounters outside in the farm setting, the creatures are NEVER hostile, no matter what I have the faction setting as. Am I missing something? Please remember I’m a total noobie to building a module, as much as I love playing NWN, almost no experience at building.

Also, I have a few domestic pigs in pens in the toolset. But when I run the module, they are slightly out of place, one out of the pen, two standing with the fence passing through them. Is there a way to keep them exactly where I place them in the toolset?

Thanks in advance for any help.

It could be something to do with scripts attached to creatures too. If Thou created creatures for encounters from scratch and did not set up all those scripts like “OnAttack”, “OnDeath” et cetera, they will ignore player even if they are set to hostile and in hostile faction. 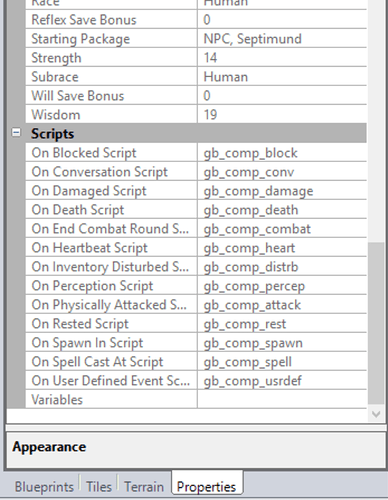 What the others said about the encounter should cover it.

The issue with the placement though, perhaps you have a variable set which makes them randomly wander the area? Maybe setting their movement as “immobile” will do the trick.

Taihou, thanks! The scripts are probably the problem. I don’t have any scripts assigned to the creatures as they spawn in. I’ll try a simple attack player script and see how it works.

All, thx for the advice, but none of it worked… Very weird and frustrating. I’ll have a new post up shortly with more details.

Creatures sometimes get displaced if there isn’t enough space to spawn. Try making the pens larger and see if that helps.

AH! Good idea. I’ll try that and let you know how it works. Thanks!