NWN Armory and the whole Dark Magic behind the robes

[Non EE question!]
So, yeah. As probably a lot of people around here, I stand absolutely stunned by the sheer awesomeness that are Azimn’s Dynamic Warforged.
https://neverwintervault.org/project/nwn1/hakpak/original-hakpak/dynamic-warforged-race
Now as everyone who would love to add them to my own module, I would like to make them compatible with some of the custom robes/clothes that I already have in my haks.
I know that robes are tricky, and NWN Armory is pretty clunky and confusing to me.
Now I know that Warforged run on rescaled gnome skeleton, would that help with importing my custom robes? Can I use that to my advantage, like I can use overscaled human models to still have their heads scaled properly?
Is there a modern alternative to nwn model compiler that WORKS on modern systems?
I would be really grateful for any help with that.
Let’s say, I’m trying to make Eurgiga’s RBA work with the warforged. Where do I start?
https://neverwintervault.org/project/nwn1/hakpak/original-hakpak/eurgigas-robe-based-armors-2-now-acp-compatibility

You need gmax / blender and their corresponding neverwinter plugins (nwmax and neverblender). I’ve been using gmax. I realize that’s like stone age software, but hey I found it simpler to use.

If warforged is a scaled up gnome model it should be straightforward apart from the software’s steep learning curve. I tried messing with robes for my dynamic satyr race, and it didn’t go well because the legs are bigger. I scaled up the bottom halves of the robes by ALOT and the legs would still poke outside of the robes. It’s gonna take more knowledge of animation to fix. If it’s as simple as making a gnome robe bigger then it should be relatively easy.

If you’re having trouble using nwnmdlcomp the EE version is here, the old one didn’t work at all for me either:

There are a lot of resources and links by many different people floating around, and those that have been around NWN for a long time or never left might take knowing where to find it all for granted.

Using a text editor can be much easier. You need to start from a robe model that’s close (e.g. gnome). Change the model name and supermodel name throughout to match the new race. The NWN Model Renamer on the Vault will do this in batch.

Decompile the model first if necessary. (I don’t understand your comment about the compiler as it works fine on modern systems - it’s a console command, so you might need to read up on that).

In theory, the rigging of robes can be very complicated, but in practice very few robes are problematic. With the exception of the long coats introduced in 1.69, which are well-nigh impossible to fix, the approach above has always worked for me.

If you really must use a modelling tool, NWNArmory is not the answer for robes. There is a utility in NWMax which doesn’t require mastery of the tool as a whole. I made the following rather cryptic notes about it:

I did do that once, but the text editor is quicker.

Well i see some people are already quite interested in this work of his as i am, and i was thinking id wait to announce the work i did on his stuff by converting them to the human body shape. It was my way of getting around the limitations of the custom race by simply adding them to an already existing race that doesnt require me to do weeks if not months of work remodeling robes and outfits. 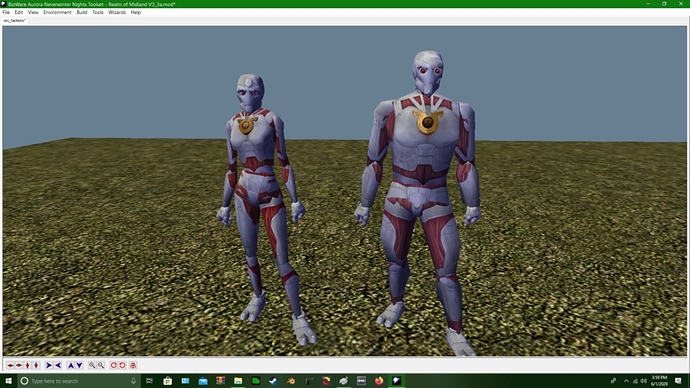 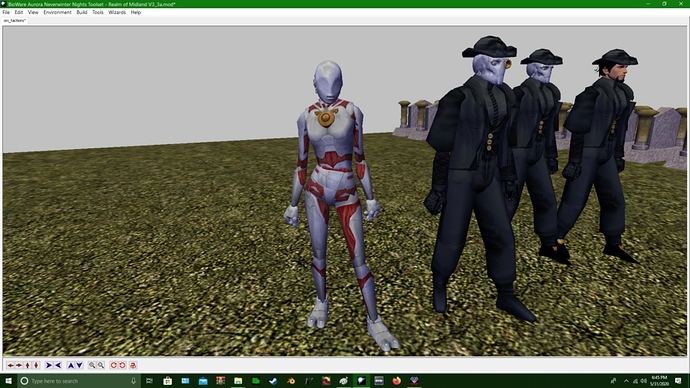 No need to resize them! Azimn found a quick way to scale the robes hold on let me drag him into this.

I cheated and used the half orc robes

and used scale to make them match. Using the scale cheat scaled all of the base pieces but not robes or clocks so I took them from the half orcs. Originally I wasn’t going to use the female half orc but the male robes looked odd on the female Warforged. Both were built in the male gnome frame but Acidchalk helped get me scaled female torsos to add in. So the truth is I was lazy lol

You know I just added a scale by text editor in the mdl file… I would think it might work for robes and clocks but was worried about the animation height.

I’d like to add that NWNMDLCOMP has been working for decompiling, but I’m just now learning that it won’t compile anything. I tried recompiling those bird armor parts from CEP (#219-221 the ones with large file sizes) and it did not work.

However, sometimes there are error messages, reporting faults in the models that need to be fixed manually before compilation can succeed.

A good test is to take an existing Bioware model, decompile it, then recompile it. If that doesn’t work, try copying nwnmdlcomp and a shortcut to the command prompt to the folder containing the model, so that you can run the compiler without path references.

I have found that NWNmdlcomp is not a complete solution. It ignores (i.e. does not compile) selfillumcolor and therefore strips the glow from such things as my TR’s Runes, So I now do not compile any model that I make.

Proleric, I’m using that method and for decompiling I’m getting this error message:

Then if I do the same thing, but for compiling I get a different message:

Assuming you have .mdl files to decompile, the first command should read

To compile, assuming you have text models .mdl.ascii, the command is

Well I finally got the shortcut method to work, but it’s still only decompiling and not compiling

Could be your registry keys, judging by this post:

Simply renaming works like a charm! Half-Orc size is working pretty nicely with those robes! Thank you everyone for your responses.

i found it to be the best option, and from what im seeing around here theres lots of different alternate routes to take that i didnt know myself.