A member of the NWN community just reached out to me regarding availability of the Neverwinter Nights Podcast, which had been migrated to YouTube some years ago. Apparently and just recently (and as I’ve just confirmed), the episodes have disappeared from there entirely. The only one left is episode 199, which appears to have been posted separately on Brian Bloom’s channel.

The NWN Podcast represents a historical archive of significant value and importance to the NWN and NWN2 communities, and its sudden disappearance is not a small thing. (Having having appeared on it myself about a dozen times, I’m personally distressed about it as well.) I’m making an effort now to reach out to some of the folks involved in producing it, to try to find out what may have happened, and to see if arrangements can be made to have it restored.

I am concerned, though, about the timing of the disappearance. From a web search, I found what appears to be a new Wordpress site under the domain neverwinternightspodcast.com, which contains some information about the game (but no podcasts). A whois lookup shows that it was renewed in November 2019 through NameSilo. Hina posted with a question about this in December, and now people appear to be asking about the disappearance. I hope these events aren’t connected, but I can’t help but wonder.

If anyone knows about the status of the NWN Podcast and its episodes, please let me know so that I can share that information with those of us who are interested in restoring access to this valuable historical archive.

OK, after looking into this, I think I understand what happened now. Apparently the NWN Podcast episodes on YouTube had to be taken down because of concerns raised by YouTube policy enacted in response to the new “Child’s Online Privacy Protection” (COPPA) legislation. planned to re-post the archive to a new website, but that hasn’t happened yet. I’ll track the status of this and follow up with the community when there are any updates.

Announcement regarding the removal of the podcasts

Some background on the COPPA policy/legislation

So I actually looked up the COPPA FAQ on Google. Basically it means that you have to designate your YouTube channel as 1) made for kids, or 2) not made for kids. This does not seem to warrant removal of all content for anyone. Disappointing that the podcasts aren’t available, since there is still a lot of relevant content in there.

The NWN Podcast was never intended to cater to kids, though. But NWN is a game, and the video I posted explains that YouTube’s algorithms may change your rating – which I imagine could open up the poster to legal sanctions if the content weren’t actually and consistently “kid friendly.” I don’t know the specific thinking that went into the decision to pull the podcast, but I can understand why they might not have wanted to deal with that.

Well, I kept a copy of the one I spoke in (Episode 70) … https://www.youtube.com/watch?v=pxNZxOV32B4&feature=emb_logo

Maybe others did the same?

Um, if it’s of any help, I have episodes 1 through 188 saved as .mp3 files.
Strangely, episode 114 is missing - can’t imagine why…
Pretty sure Andarian is in episode 130 and other ones as well probably.

Skunkeen skipped the number 114 when he posted the next podcast, labeling it 115. The podcasts continued on at #116. There was a thread about it on their old forums back in the day

And there is this link …

Unofficial homepage for the Neverwinter Nights game, developed and maintained by the NWN community.

I went on their Realms of Trinity webpage (https://www.facebook.com/NWN2RealmsOfTrinity/?fref=ts) but don’t see a way to post on their page or send them a message. Tried to register on the Realms of Trinity forum (but it requires you to log into their game server with NWN2, which I don’t currently have installed). https://www.realmsoftrinity.com/Forum/

I recently (yesterday) posted this on Briam Bloom’s Facebook wall (but not sure how active he is on checking Facebook). 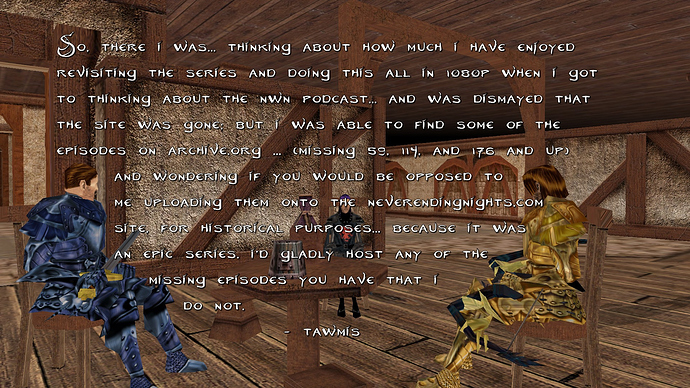 I am thinking of just uploading them to my NeverendingNights.com website - to have as historical (I appeared on two episodes, but I already had those saved - but I want to preserve all of them that I can find) - and at this point just ask for forgiveness later.

FWIW, it might be a good idea to post a request for help finding those missing episodes on all (twitter, etc.) that you have an account with. BTW congrats on being one of the winners of BD’s contest.

Aye, going to hunt them down there as well (the Twitter-Sphere!) And thanks! I was surprised! Normally not one to win things - so that was a pleasant surprise! Since I already had Neverwinter Nights - Enhanced Edition I opted for Icewind Dale - Enhanced Edition since the next D&D release has to do with Icewind Dale.

I’ve uploaded the NwN Podcasts I was able to get here:
http://neverendingnights.com/nwnpodcast/

Hi there, Mr Logue,
I’m more than happy to send you the episodes that you’re missing.
Would an email and attachment sent to the address shown on your “Professional Voice Actor” website be ok?
I’m afraid I don’t do such things as Facebook, Twitter etc.
Let me know here if that’s all right and I’ll get on with it.
Cheers,
Mr T

Actually I got a hold of Brian - and he gave me a link to grab them.
114 seems to be missing. He doesn’t even have a copy of that.
But I managed to get the others from him - only one I am missing is 177 (he may not have uploaded that one), so I just told him just now. So he may have it, and get back to me. Just waiting to hear back.

But if you have 177, yes, sending the email to my email address should work (probably depending on the file size).
The episodes I just got from him (literally just a few moments ago), are uploading now - and should be done soon on my site. Going to make a page for it when they’re done uploading so it can appear in search results.

EDIT - Made a quick site for the podcast episodes. I will probably flesh it out over time.

Sorry, just tried emailing episode 177 to you, but the file is too big.
Tried compressing it, but it’s still too large to send.
If you know another way for me to get it to you, let me know.
Cheers,
Mr T.

There never was a “114”. The episode was mistakenly posted as “115”. They had a good laugh about it in the forums. They kept the numbering order and the following podcast continued as “116”.

*The reason for this post is to save someone in the future from wasting time digging through their old HDs looking for this Holy Grail.

Eat2Surf made the comment: “Oh… and if you’re wondering what happened to Episode 114… well… There we were… Skunk, StrikerB and I … alas… it appears pirates have pilfered our show. Rest assured we’re combing the seven seas for you, our loyal listeners.”

Anyway, a screen capture of the Podcast Index from 2010:

Good to know! I made a note on the page about that and gave you credit!
So the only one I am officially missing is Episode 177.
I did, today, notice a bunch of them didn’t have the embedded NWN Podcast image - so I recreated that image, and went into each of them and added the image - and resaved them (this took quite a bit of time, but it bothered me that half had the image and the other half didn’t)

I am currently REuploading them again, so that they all have the image.

@pturner20 In all the archiver programs that I know there is a facility to split large files into smaller chunks. For example in 7zip you can split a file by a fixed number of megabytes starting with 10MB. All you do is right click the file to compress, select 7zip/Add to archive from the context menu. Near the bottom of the dialogue that comes up you will see a drop-down box marked “Split to volumes, bytes:”. That is where you enter the number of MB (or less) to have for each part.

Ah! Sorry! Not sure how I missed this! Yeah, you can try 7Zip or if you have a google drive you can share it with me on there (sirtawmis) or through dropbox?

Not for the first time, Tarot has taught me something new!!
I’ve split the podcast up into five bits and have sent them off to you in two emails.
I hope this works and that your collection will now be complete.
Just my way of saying thanks for NEN, which I have watched through twice over the years.
All the best,
Mr T

It did indeed work! And now included on the page with a thanks to you for getting this episode to me!