I am trying to make creatures to replace the original neverwinter nights campaigns henchmen/women (Tomi, Linu etc) they are not on the appearance.2DA.

I am not sure if it is even possible, but can somebody point out which 2DA I should mess with to do this

I think they are dynamic NPCs. They’re on the NPCs, Others list. At a quick glance, it looks as if each one uses their racial Head001, but I didn’t look beyond 3 of them.

They aren’t tied to any 2da. The OC ones are on the palette and just use the standard racial appearances like a PC would.

Of course, that doesn’t mean you can’t use a new appearance for any of them. Just set their appearance to your choice, once you add it to appearance.2da and get that in game. Gah, typos abound.

That’s exactly what I am trying to do, but I want the game to use my creature appearance by default when I play a campaign game without having to edit it in the toolset, but I guess I will have to do it the toolset way

well, there is a way you can do it w/o using the toolset but it’s fairly involved. the characters whose appearances you want to replace are in templates.bif, so you could export them directly and change each template, then put them in your overrides folder.

if you’re still not daunted by this prospect, here is one approach. 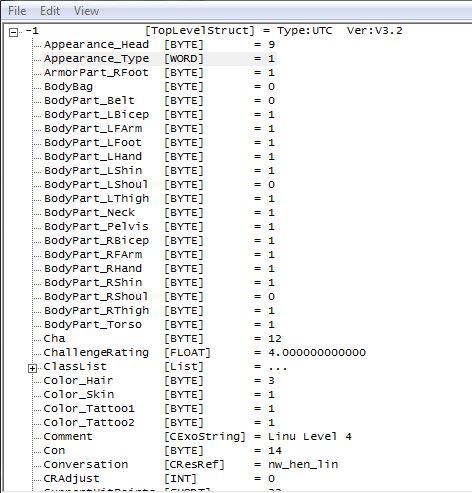 i can think of another, much faster, way, but it will work only with a unix-like o/s. if that just happens to be you, lmk and i’ll post it.

Thank you @xorbaxian. As a nitpicky line-tracer, this is definitely something I can work on. I’m pretty basic when its comes to OS so its just windows for me.