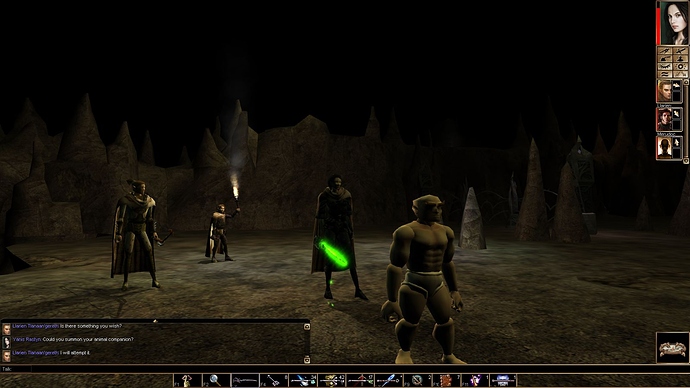 As you can see, the henchman ranger Llarien shows rather… peculiar proclivities when it comes to his “animal” companion. Far be it from me to judge, but…

Does anyone have any idea what could cause such a bug? I have no dedicated familiar mods installed aside the Familiar Fixes included in CPP 1.71. I am playing the Prophet I on Diamon 1.69. Would appreciate any lead on how to fix this!

EDIT: I should add the henchman functionality seems to be coded with the 69MEH69 system.

If memory serves, this was a Bioware bug for the NPC Feat (I don’t think it’s a PC feat) for Summon Shadowfiend. Really not so much a bug as it was Bioware never created critter resrefs for this particular Summon script. The module maker/designer would have to create his own resrefs for the script to summon, otherwise it defaults to a naked dwarf (I suppose the dwarf was first alphabetically so that’s why it’s a dwarf and not an elf, halfling, half-orc, half-elf, human or gnome).