Oh boy...I have a serious issue

I just discovered that I cannot open an area that I have the Bugbear Hero model in…you know the vanilla Bugbear model from the standard pallette.

How the heck do I fix this!!!..I can’t even go in there to delete the model…anyone else having this issue?

OMG…this can seriously screw up my whole module wherever spawns call for this. I tried to open the model in the standard pallette and my module just crashes.

What the Hades???..how can a standard creature become corrupted?

How do you know, that it’s the Bugbear who causes the trouble? The name of the creature (“Bug”-Bear) might be misleading.

Import the area from a backup of your mod.

I searched and searched and tested why I kept crashing in certain areas. Then I discovered that in all those areas I had bugbears. Then I went to look at all the bugbears on my palette (I opened one by one in both the custom then the standard palettes). I realized that when I went to click on the first bugbear hero on the standard palette the toolset would crash (the spiral of death)…only on that model…it won’t let me open it nor place one in the model. So I suspect it has an issue. Anyone else have this issue? How can I fix this?

See this is the error message I get when I try to click on the bugbear hero from the standard palette: 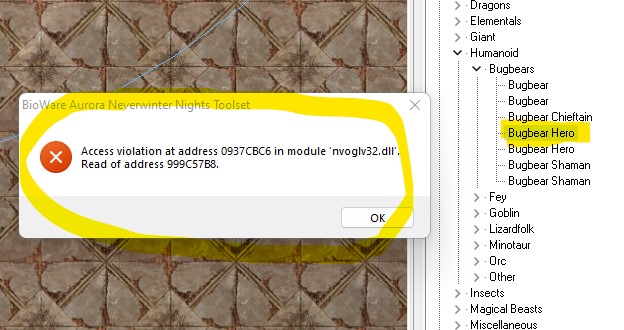 Anyone know why this is happening?

Ok, the best assumption I can offer is, that the standard-model of bio is overwritten by a corrupt model in any hak.

These names are given in lines 25-30 of the appearance.2da. They must not appear again with higher line-numbers. The first two are the most suspicious.

If you find another entry with one of these, deactivate it by setting the first five columns after the line number to “****” Never delete an entire line from a 2da.

The next step is to search through all your custom … hey don’t rush me … haks for these names and remove the .mdl files.

Went through my appearance.2da like you asked me to do.

Exactly on the lines you said above on the 2da…lines 25-30. No other duplicates of these on my 2da. I have bugbear versions of c to h on the lower part of my 2das. No conflicts. I can place all of my bugbears from the palettes on the ground except the one that crashes the toolset. I removed the bugbear hero mdl from my hak…still crashes. This was never an issue…until recently…wonder if an update screwed it up. You get the same issue?

Hero loads for me as a base game model. You could share the MDL file, but it sounds like it’s still loading the old version, restart your computer and remove it from the hakpack before loading the toolset.

You can also use nwnexplorer to triple check the file isn’t somewhere else erroneously like override, development or anything.

The Heroes may be any of those, I forget which matches up.

Also thanks for your input…

I looked in my hak where my bugbear mdls are. See below image. Can you tell if anything is wrong here? I do note there seems to be two bugbear hero types very similarly named. I put a yellow dot highlight by the similar names: 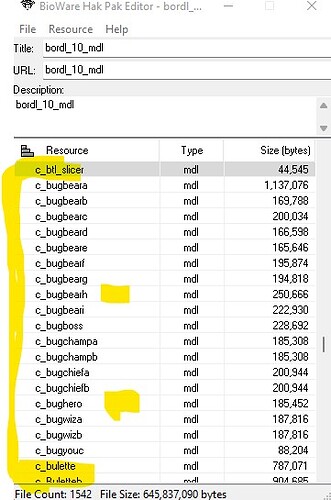 Also I never keep anything in the override folder

If you remove all the c_bug models, well, copy them out. I suspect it is c_bugchiefa or c_bugchiefb - wonder where they are from. If you know the source you might be able to find some fixed versions.

Is it possible that the mdl has both a .dds and tga for the same mdl causing this conflict? But if so I have my dds hak above my tga hak so it would read the dds first and ignore the tga right?

There is no “Bugbear Hero” model, it uses appearance for the “Chieftain”;

Crashes tend to be MDL issues, not texture related usually but sure remove them too and see if it still crashes.

Ok…I took out the following 4 mdls… 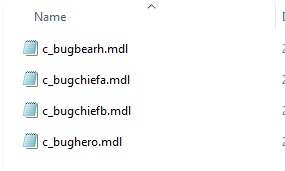 I restarted my computer…I opened the toolset and placed all of the bugbears from both the standard and custom with no problems in my module toolset…when I go to place that dam bugbear model in the toolset now…I get this new error: 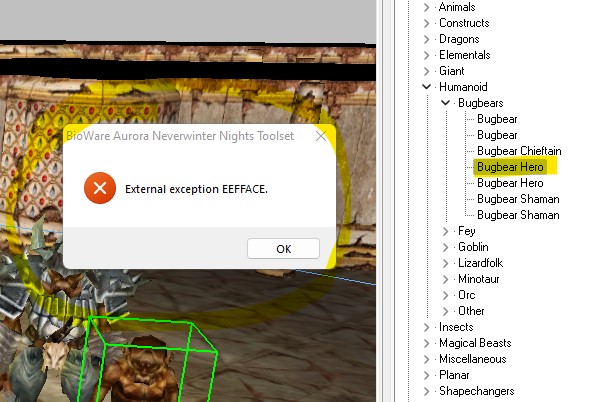 What the hell is going on? What do the two errors above mean?

I narrowed it down…it definitely is the c_bugchiefA

Don’t know why it is an issue, but as soon as I commented out the line 25 of my appearances.2da (first 5 columns with **** I can now access those areas. I removed all references to this bugbear model from my model. This is crazy…even without the model in my hak it still gave me issues.

So I guess I will have to live without that model

Don’t know why it is an issue, but as soon as I commented out the line 25 of my appearances.2da (first 5 columns with **** I can now access those areas. I removed all references to this bugbear model from my model.

So you got an advanced bug from the bear. Commenting the 2da-line out will only prevent loading the model by the toolset. It does not resolve the conflict in your haks.

Say, do you have somewhere an a_ba.mdl somewhere in your haks?

I have a few with that prefix “a_ba”…why? 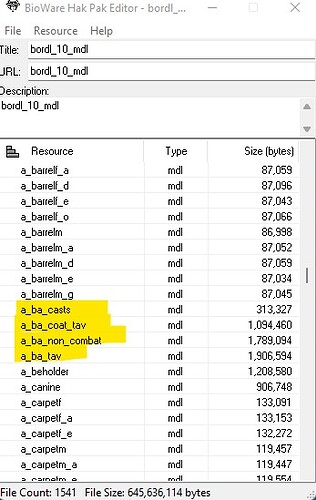 These are supermodels of the bugbear, and are most commonly responsible for animation. a_ba and it’s decendants are used by many many other creatures. Importing them from a third party source is always a bit dangerous. I think there might be an incompatibility between the bio-bug and the imported file (and other problems you havn’t detected so far.).

So far all my bubears are fine with the exception of that one bugbear.