Out the front door 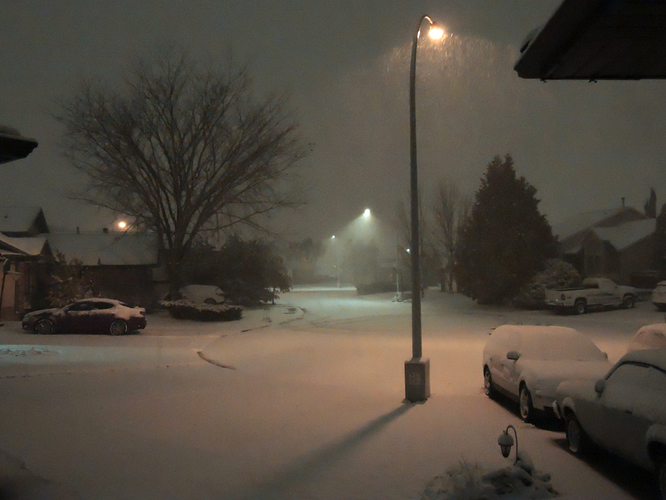 time to build an igloo …

That an odd sight where you from??

There used to be winters like that in my place. I miss them so much.

I know that feeling.

Here in Texas, the air conditioner is still running. We might get a scene like that in January or later, but not every year.

That an odd sight where you from??

I live in Texas also and that is true unless you live in the Panhandle. I don’t by the way. Although I saw snow when I was living down Corpus Christi way, but that was in the mid 1960’s. That melted as soon as the sun came up though.

I live in Garland, a suburb of Dallas.

I live in Temple. I’ve got cousins in Arlington.

I used to live near Temple. In the 70s, my Dad served his last 3 years in the Army in Fort Hood, retiring in 78. I remember that we often went to the Smorgasbord House in Belton, an all-you-can-eat buffet. I wonder if that is still there all these years later.

Sorry about derailing your thread, kevL_s.

np, Out the front door is a pretty broad topic …

Report and permaban. This is clearly a very serious and thorough discussion.

After seeing people here talk about where they lived in the sixties and seventies, I don’t feel so old any more.

I’m in Amarillo, in the Texas Panhandle (been here since '75). Some years we get several dustings of snow, but most years we get feet. Even if that’s not what fell, there’s not a tree or hill to stop the snow from all blowing into town and drifting up.

I never knew there were so many Texans playing NWN.

Also, I will note that I am not a necromancer. That title falls to Zwerk. He confused me.

Don’t worry about that Zwerkules favorite thing, what was I saying just now?