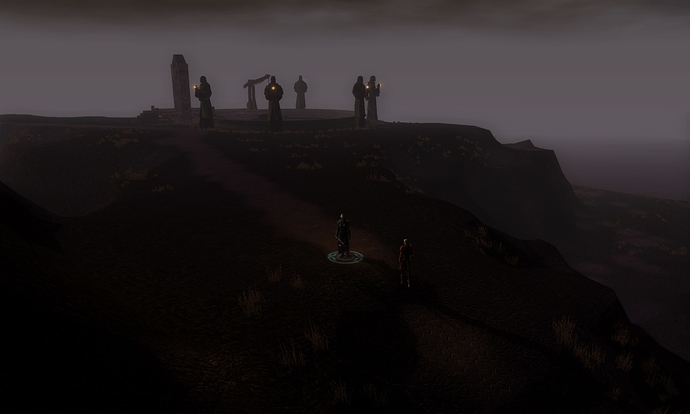 The old topic is here, and Chapter 1 is here.

Pilgrim is a campaign I’ve been working on for a while - a Dying Earth story set in a technologically-advanced, highly-developed version of Faerun.

Chapter 1 is already released, and I’m mid-way through Chapter 2. I’m aiming for a total of 3 full chapters and a shorter conclusion.

Expect less of Mini-games, technically-impressive script stuff, and combat - I don’t think I have the skills needed to make NWN2 combat balanced, exciting or a fair challenge, so I’m mostly working to keep it unobtrusive and varied. (Zero fights are mandatory - it should be possible to complete the entire game without ever killing an enemy.)

I’ll update this topic every so often when I have a nice screenshot to show off. Just let me know if you have any thoughts or questions.

I like what i’ve seen of Pilgrim I just got side tracked lately. It reminds me of an old Animated movie called Wizards made in the late 70’s when I was younger.

I wasn’t even aiming for that, but I do think it’s a bit of a weirdo mash-up classic, so thanks!

The first chapter’s already out if you want to give it a try, krighaur (although I totally understand if you’d rather wait for a more substantial release).

Hey Grog, always great to hear news about Pilgrim. Really looking to forward to how the story develops from Chapter 1!

Thanks, BowShatter! If I haven’t already made it clear enough, all your bug-checking and general encouragement was absolutely vital and hugely appreciated when I was struggling to polish up Chapter 1. (Although I’m going to _try _ and ensure Chapter 2 is a bit of a smoother release, if I can.)

I didn’t expect anybody to recognize Wizards. It has been around 40 years since it was released. The module looks great with just the right feel to it. Good luck with the second chapter.

No problem! Your work definitely deserves more attention. Even with the bugs I encountered last time I played, it was still really fun to play, mostly due to the excellent writing and atmosphere.

Well, I’d definitely love more downloads and feedback, but I’ve made my peace with the facts of ‘It’s really a very dumb idea to wait until 2018 to release an NWN2 mod.’

The community just isn’t nearly as active as it was, and any new players are much more likely to end up on the recommendation lists of older, Hall of Fame modules.

That’s OK, and it’s going to be the same for anyone releasing new content - although I did see that Lilura has been giving new NWN2 modules like Bedine and Pilgrim exposure on her blog, which is a really decent gesture.

There’s also a Steam discussion forum that still gets some traffic. I’ve seen mod builders posting in there. Reddit has one as well, although I think that’s primarily for NWN.

Grog there are still some of us that really like NWN2 better than 1. Some people are being drawn in by NWN1 EE though. I’m begining to think you guys are going to have to promote your Modules more, or maybe I need to. There are some great mods that have been made, but because they weren’t made early enough there being overlooked. The Hall of Fame needs to be expanded to include newer mods also. A lot of the new people in the vault just don’t no where to look, if they did more of the mods would be down loaded. Maybe some people will see these posts and down load this very intriguing mod. 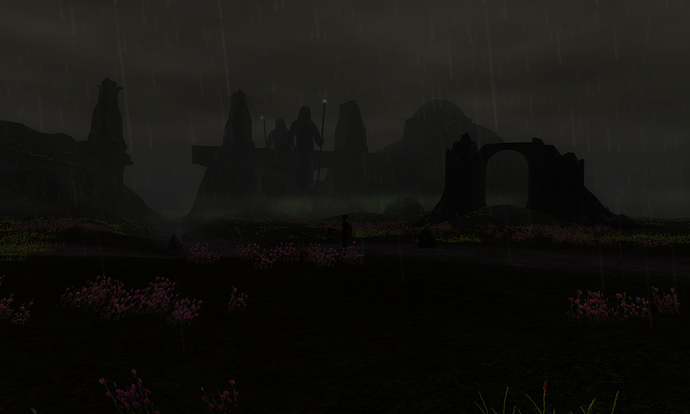 I’m currently having fun area-building - which is almost definitely a bad idea in the long run, as it’s likely to leave me with nothing to finish but conversations (which you end up rushing if you’re not careful).

Anyway, this is the Knocking Isle - a deserted, plague-ridden island filled with abandoned portals.

I wanted to create something between Skellige in the Witcher 3 and Samson, the ‘cursed’, uninhabited island that’s found amongst the real-life Isles of Scilly in the UK.

I’m also having to deal with the fact that repetition is starting to creep into my writing and quest design at this point.

Most notably, between Chapters 1 and 2, I now have three sidequests that begin with an NPC asking for help in locating a missing loved one or family member. They all play out in different ways, but I’m definitely concerned that they’re going to feel ‘samey’ when someone’s playing all the way through the campaign at once.

What do you think - is that something you notice in playing an RPG, or am I overthinking things?

May be it is just me but I do not see a problem with a npc asking for help as a lead in. Just as long as they do not all start playing out the same way. It is nice to have some variety, but not always. You could use something like some kind of here say among the caravan npc’s or something like looking for certain reagents as an example. I sure some of us players could give you ideas to get you started.

Have an npc lampshade it and make the quest introduction into a joke by mentioning that the player must get asked to rescue loved ones all the time.

Ha! That would definitely solve it, although I’m trying my hardest not to wreck the spirit of the story by breaking the fourth wall.

Every few weeks or so, I have an internal dialogue along the lines of:
“Hey, wouldn’t it be funny if this character made a reference to-”
“No, brain, SHUT UP”

Perhaps having some positive feedback from other NPCs might help. “Hey, aren’t you the guy who helped out poor old so-and-so? I’m so glad you did that! Here, my wife baked some nice mushroom squishies. I’d like you to have them.”

I actually did that already in Chapter 1, although I don’t know how many people saw it - performing low-level sidequests in Ironscuttle could cause unrelated NPCs to give you rewards and praise if you happened to speak to them again.

With high enough overall approval from the faction, you could then enlist the caravaneers to help you later on if they survived the halfling canyon _and _ if you decided to overthrow Silver Horn rule in Khundir. Again, I doubt many players saw that!

I guess that’s another whole can of worms for me - not just implementing lots of low-level reactivity, but making sure it’s well balanced. (For instance, is there an ‘evil’ equivalent to mushroom squishies in a given NPC hub? If not, can we create an equivalent area where evil characters will have an easy ride and good characters will struggle?)

Updated chapter 1 with a new patch this week!

One thing I’m trying to gently, gradually do is to strip back some of the least-interesting content in the second half of the module, where I think I didn’t have as careful a handle on the tone and structure, and which has ended up a bit of a narrative mess as a result.

(In an ideal world, I think I’d like to quietly remove the two guilds entirely further down the line, since choosing between them doesn’t offer any kind of interesting dilemma, and turn it very much into refugees vs mercenaries, revolution vs law and order. But I don’t know whether making substantial changes this far into the creation process is going to cause me grief.)

It is also nice, going back through old toolset content, to see how my organisational skills have improved from…the utterly nonexistent, this time last year: 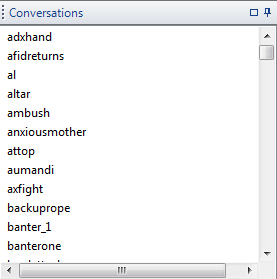 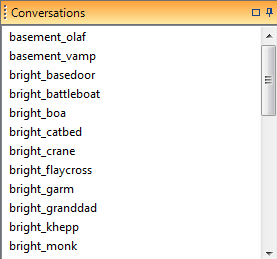 Grog your the author of this module do what you think best and wait for feedback from us. Use us as testers and go off what info you get. Or you can do what you think feels right. You aren’t going to please everybody.