According to the placeables.2da, the correct placeable is visible in the toolset, but it has a different placeable visible when I load and enter the game (fresh)!

What on earth has happened here? 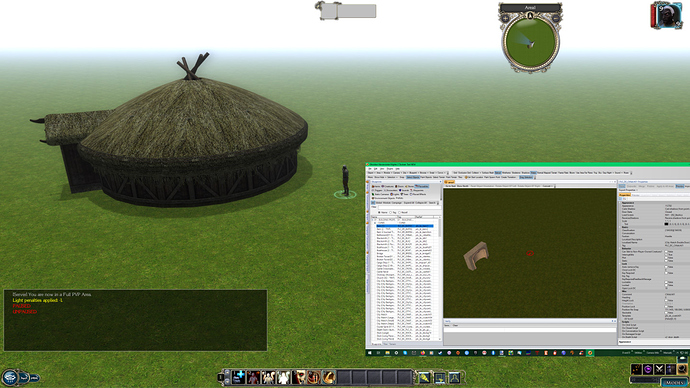 2da conflict (double) on Hak or/and override came to head, however I assume you already look for that…

Yes, I already checked for that.

As far as I can see, I only have one placeables.2da in my campaign.

The weird thing is that this is correct in the toolset, but just changes image in the game - even a brand new module (as the image shows).

I am stuck until I can get this sorted.

OK, maybe I just am misunderstanding a hak arrangement here … for I managed to get the placeable to return if I removed it from a hak and placed it back into the campaign folder.

Have I been dumb, and is it a case that placeables do not work properly inside a hak?

EDIT: But that would not explain why they are correct in the toolset, but maybe … that’s the way it is?

EDIT: Perhaps I have hit a hak size limit?

I know I have had similar problems in the past. There is also a question of priority of the haks (it seams that the 2da must be load first for example) and I noticed that if I exceeded 695000 ko, the haks had a annoying tendency to present bugs. At least that was my case. These kind of little problems are extremely frustrating and can ruin a “module production day”. Please post your answer when you find the way around. It could help someone who might have a similar problem. Have a nice day !

These kind of little problems are extremely frustrating and can ruin a “module production day”.

I think this is going to happen to me today, as I am unable to continue with this problem.

I am going to have to revert to an earlier build and rebuild the hak to a stage that does not break.

Do you happen to know if there is a hak size limit in total or per hak?

e.g. Can I have two 1GB haks if the limit is 1GB per hak, or only include haks that would total 1GB?

I also read a while ago that some 2da won’t work from haks (but I’m not sure it’s the case for placeables.2da though), and that the 2da should be in the same hak as the mdb (which may be the same as Raymond’s comment about 2da loaded first).

should be in the same hak as the mdb

I will try this next then, as I did try it inside another hak (instead of the campaign folder where it currently sits), but that did not work.

I had hoped to not have to do that (as it is such a large file), but if that resolves it, then I may resort to that.

Yes, the 2da haks must be loaded alone or with the mdb files. The size limit seams to be 695,000 kb (kilobyte) or 695 Mb if you prefer. The haks I use for Baldur’s Gate, Beregost, Friendly Arm Inn, etc. are all between 690 and 693 Mb. When I exceeded this limit, several bugs appeared.

And may explain things.

I also read a while ago that some 2da won’t work from haks (but I’m not sure it’s the case for placeables.2da though), and that the 2da should be in the same hak as the mdb (which may be the same as Raymond’s comment about 2da loaded first).

I load all my 2das in a dedicated hak file. It works fine.

I load all my 2das in a dedicated hak file. It works fine.

What size are your haks?

And may explain things.

Yes there are definite limits. 4 Gb hak file would be an absolute limit for a 16 bit game. It’s probably more like 3.75 Gb or 2 Gb. The count of items in the hak also matters. I split mine into several haks with different functions. This has the added benefit of being easier to maintain and download when changes are needed.

What size are your haks?

The largest is 280 Kb at present. But I was careful to only add what I needed, rather than merging in large collections. Plus I intentionally half-sized some of the largest but low priority texture maps.

Is that per hak, or the “maximum amount of haks” possible?

Is that per hak, or the “maximum amount of haks” possible?

It’s got to be per hak. The packs for the SOAR project are currently over 11 Gb total, in 12 hak files. The largest hak file is 1.6 Gb.

(Placing placables.2da into same hak did not fix problem. Made it worse.)