POLLS: What is your preference?

I always use my very first character, created back in 2006. I do so because I like the New Game + concept, I designed a way in which he keeps growing beyond level 40, so I couldn’t care less about balance or background because my character fits any situation. I also believe a player should be free to play however they want, without limitations set by authors. He’s worked perfectly in any module I keep in my collection, and he’s a fantasy version of myself.

You made me curious: what is that way you designed? Do I understand correctly that your character is lvl 40+? What do you care about in those single player modules then, do you play them mostly for the stories and puzzles, rushing through the action? I’d assume the opponents would pose no challenge and the loot would hardly have any value for your character anymore? Does he even earn any worthwhile xp? And if the module assumes you grew up on a farm or something, or different modules present different parents to you, do you find good explanations for how your planewalker fits into this, or do you just not care? Or do you have a bunch of very specific SP modules in your collection that play differently than your average low level adventure? I admit I myself have a little trouble imagining how being so heavily overpowered and not truly anchored in any setting could stay fun for so long, but I agree that whatever floats one’s boat is fine in SP.

Personally, I think I actually appreciate level restrictions and item strips, because it means I’m prepared for taking on the challenge of the module without any “unfair” advantages that might spoil my fun, and because it gives me new side goals again (gathering new equipment), but of course that’s a completely different approach. I guess the best compromise would be if a module just made level restrictions and item strips optional and also gave everything back to you at the end (although I also kind of hate the inventory management that would be caused by this - worst are modules that take away everything from you at the start or in the midst of an adventure, only to give it back to you a short time later, so that you have to sort it and reassign all quickslots all over again).

Question to the veteran modders her: Would it actually be possible to store and restore a complete inventory, including the previous position of each item in it (which tab, which place etc.)? I suspect it isn’t? But IIRC, you might be able to do it with equipped items? Re-equip them as before the strip?

I use LETO to de-level my character but keep note of what final count of attributes, skills and feats is at each “cycle,” so that once I re-start the same character at level 1 he already has all the attribute points, skill points and feats he had at level 40, which allows him to keep growing past that point. It’s not as overpowered as you may think due to hp loss by de-leveling, but it certainly makes things less problematic, and is absolutely great for skill-check in convos and equipping any kind of gear. As for why I play, it’s always for the storyline and characters. I’m not the kind of gamer who is all about “challenge.” I like my games as I like my women: Easy. There is still a chance I will die in any module due to hp loss at leveling, or by adjusting the difficulty. I’m presently in the 6th cycle of getting to level 40 and then de-leveling, and I still get whacked every now and then. Ah, the xp thing is a very interesting question! For one, I modify every single module I play, whether it’s new or part of my collection, to include my own aesthetic and functionality hak packs. If the module has no henchmen I quickly build two, a rogue and a cleric. I remove any stripping or deleveling script routines (as I previously said, I don’t care for authors limiting my gameplay in ANY way). Finally, one of the mods I use, Lilith, allows you to change a plethora of in-module options, XP scaling included, which I always set so as to get 10 xp per kill at minimum. You know how having henchmen cuts your XP earnings? To hell with it, I simply adjust so I always get at least 10 XP! As for roleplaying, it’s actually pretty easy to justify. You see, about 80% or more of storylines have the character be the son of a god, a king, having amnesia, or being the chosen one somehow, which means they are not what they appear to be. Since I play in Fäerûn, Aielund, Beleria, et all, my character being a plane-walker makes perfect sense. Add to that my personal collection is set so it makes sense as a timeline, you have me being stranded in Aielund after jumping into the portal at the end of Shadows of Undrentide. I also explain the amnesia in several storylines because it’s a recurring thing. My character is meant to have lived for a long time, maybe even been around since before the fall of the Ssri-tel-quessir, and has been subjected to curses, the duress of plane-walking, etc. Sure, there may be inconsistencies, but only in new modules I play (which are VERY few nowadays) but my personal collection of modules is extensively modified so as to make it fit not only with my character, but a larger, main storyline. As an example I mentioned how I bridge Shadows of Undrentide and The Aielund Saga, and this is true of every single shift in series in my collection, from Heart of Winter all the way up to the Prophet saga. As for your preference on gameplay, like I said, I take the reins of my games as I see fit, meaning, balance is my responsibility, not the author’s. Aside of the method I explained to de-level, I also start every adventure with whatever gear is available in the particular module or series. While I don’t abide by stripping scripts, I do like a sense of progression, so the only thing I use from previous adventures is my clothing, which has zero AC. This means I HAVE stuff I bring in, but choose not to use it. It’s MY choice, not a scripted obligation. This way, I can feel the growth by way of equipment. You see, it’s not that I go in at level 40 and wielding 7+ equipment, though I wouldn’t have an issue with anyone doing so. I am all for the concept of New Game +, and I do the same in pretty much any modern game. I start a new game plus in say… Odyssey? Fine, but we’ll start off with whatever gear is provided all the way from start to finish. Usually, in modern games New Game Plus is scaled to the character’s level, something I try to emulate in NWN by de-leveling and restarting gear. Finally, the answer to your question is simple: It is possible to store a complete inventory if it isn’t stripped to begin with, OR you can use Lilith, or a similar mod, which allows for a virtual, persistent vault where you can store your items between modules. I think our approaches to gaming are very similar and you may benefit from some mods like Lilith, Leto and the Character Customizer by Kamyrin. It’s just an involved process, not exactly plug-and-play.

I think our approaches to gaming are very similar and you may benefit from some mods like Lilith, Leto and the Character Customizer by Kamyrin. It’s just an involved process, not exactly plug-and-play.

Yes, I was going to say, this actually sounds like an interesting but very involved approach! Like you’re half player, half author.

But indeed, quite different from what I imagined at first. Thanks a lot for the in-depth explanation!

I’ve never used Lilith or Leto, I think, but Kamyrin’s CCOH is my favorite thing ever!

I’m not the kind of gamer who is all about “challenge.”

Me neither, I’m somewhere in between. I tendentially prefer easy over frustrating, but if it gets too easy I don’t enjoy it as much anymore.

I would like to propose a questionnaire:
Wouldn’t it be better to highlight whether the assets uploaded to the site are for NWN or NWN2?

Let me explain: I arrive at the home of the site and the bulletin board appears, with the list of new contents, but it is not possible to immediately understand which version of the game they belong to, I am forced to open the project sheet and go and look for the description .
It is an incredible waste of time.
I would put some sort of token or written to indicate which game the resources have been loaded for.

The frontpage listing already show what version of the game the content is for (see the 2nd column). The onus is really on the person uploading the content to make sure its tagged properly. 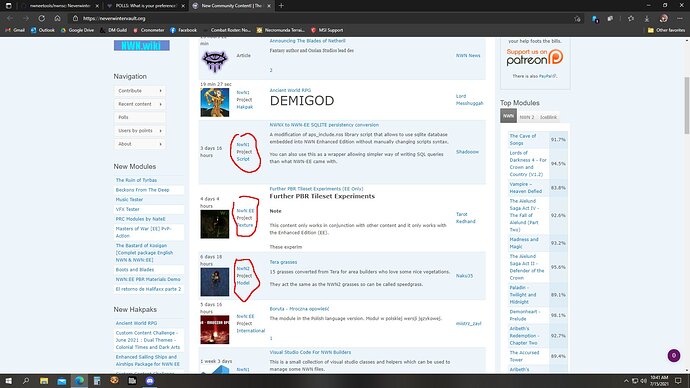 corrected - forgot there is NWN-EE option for “Game” selection.

The front page is not really a problem. The Recent content list, however, is. For each entry that I need to check out I have to hover the mouse pointer over the entry and look in the bottom left corner of my browser where the address is displayed. In that address there will be an indication for which game the content is for. On the other hand I have learned, to an extant, which game people who regularly appear on that page, actually tend to play. So that is a bit of a shortcut.

Here, one thing that would be needed, is a box for projects where it is indicated if they use hak or other external files.
Because I hate external content, and whenever I feel like downloading and trying something, I have an incredible effort looking for projects that fit my needs, that is, not having external files.

I voted for this as I am a proven coward. I prefer to stay at a distance and get my backside handed to me by one and all from there. so I go for spell caster if its first run through a module. Not been a great choice for me so far . . .

There is a spot on the Projects page for required projects. Maybe it needs to be highlighted more in some way?