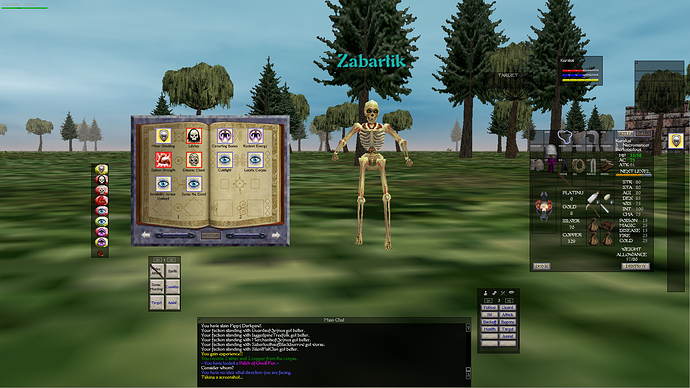 It looks like something to do with Everquest. At least, from what I remember Everquest looking like when I gave it a go once. However, my memory may be playing tricks, as this also looks more amateur than I recall Everquest being.

It blew my mind when i first logged in. And it’s been reincarnated as Project 1999, or p99 for short ( free to play ). When I installed and logged in the other day I thought it was going to be a case of “oh nostalgia, you’re such a tease”. But it’s such a good game-system etc that … it’s the same old EVERCRACKHEAD.

And surprisingly the servers are getting ~1000 players per day.

Another warning for those interested: gameplay is brutal and unforgiving

My wife, my best friend, his wife and a group of us were die hard EverQuest players back in the day…

That they have SOE’s (well, not SOE, but the current owners of EverQuest’s blessing - Daybreak!)

I’m finding P99 a lot more laid back than EQ was. It’s a lot friendlier – druids run around buffing ya with Sow just because they can, eg. Wizards /ooc ports for donations, etc (corpserun=free). It’s a lot less competitive than the old days. Server-policy is like, “hey no ganking, lets have fun instead”.

I feel like that’s how EQ kind of always was (I was on Erollisi Marr server back in the day).
Druids and Wizards porting people around, Druids and Clerics buffing people for free (especially at the EC/East Commons tunnel - which is why it was great to bind at Freeport for those who couldn’t bind anywhere) - run to the tunnel, get a buff - then ask for a port.

To me, I think everyone knew how brutal EQ was!

But yes, P99 seems to echo that friendly vibe. I think maybe more so, because all of these other MMOs (especially World of Warcraft) are infinitely easier (and you can solo play the entire game, sans Dungeons, easily; which has never been the case for EQ) - so people know if they’re playing on P99, they are a bit of a masochist.