When the characters in my module get to a certain area, I would want most of it to be hidden. I’ve already tried this and been successful before, but for some reason it doesn’t work with this particular area. What could I be doing wrong?

I am using this script here:

This script, in both cases, is fired before the PC jumps to the area in question. In two cases it has been successful, but not in this third one. In this the area is fully visible in the map. The map looks something like this (it’s a prefab area, by the way): 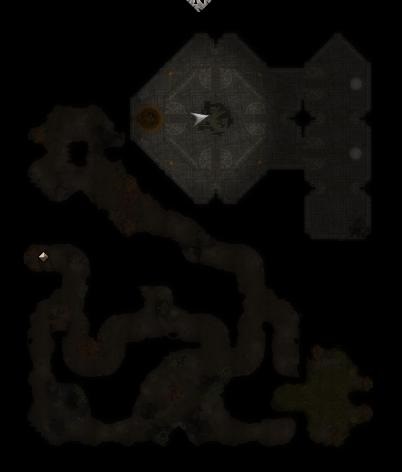 Do you have a link to that prefab?
I think I have an idea of the issue you are experiencing - Unfortunately, some tiles reveal the rooms/hallways beyond the wall, even though they may not be connected or you haven’t opened the door to the room.
This video explains a lot of the issue and might give you a work around:
YouTube vid

Thanks for the answer, @travus! I’ll take a look at your video.

The prefab I’m using is this: https://neverwintervault.org/project/nwn2/prefab/area/coiled-cabal-outpost

Really great to hear your voice, @travus, in the video! Great video with very clear instructions and explanations. So glad there are new videos (I mean it’s only a few months old) regarding teaching the toolset!

I’ll try and see if there are tiles that I should replace in the prefab area. What makes me worried is that in your example video there was only one room that was visible. As you can see in the prefab area, every gawd darn room in that area is instantly visible in the map. So, is there a lot of tiles I need to replace then or is it something else? I’ll take a look and change a few tiles there now. I hope it will help.

I would want most of it to be hidden

I use “black blocks” or “lids” that are removed as the player either opens a door or enters a trigger.

And for general Map Cover, I use my own Fog of War … But I think it’s the former you are after.

Yes, I know about your Fog of War, and I’ve seen how it looks in your The Scroll module. I’m afraid I don’t want that. IMHO I don’t think that looks good.

Holy, moly…there are so many tiles to go through. I’ve tested three of them that I thought might be the problem, but nothing has helped so far…

If you somehow can help me with this, to try and pinpoint if there are one of the tiles that are causing this, I would be extremely grateful!

EDIT: From what I can determine so far, one of the metatiles used is causing part of the problem, but that metatile only seems to have one variation, so I don’t know how to go about that exactly. See the picture: 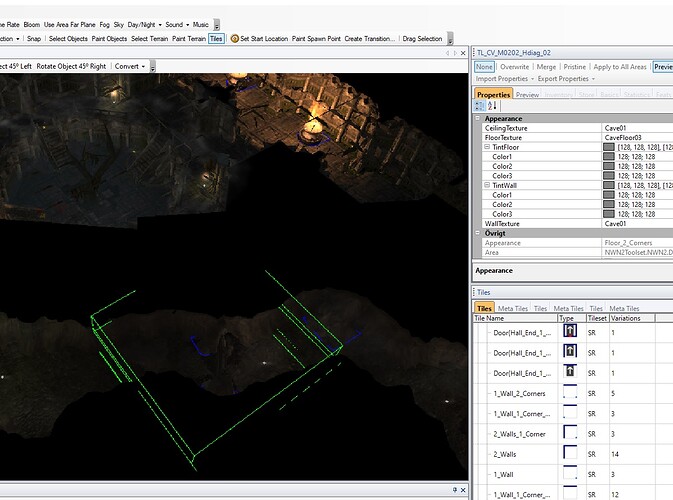 Yes, I know about your Fog of War, and I’ve seen how it looks in your The Scroll module. I’m afraid I don’t want that. IMHO I don’t think that looks good.

I do think you need to be more gracious at times …

First, I did express that I thought it would be the former points I made that you would need … and secondly (to redress the balance a little) considering NWN2 lacks FoW by default, I (and some others) do think it looks good …

I could comment further, but will refrain from doing so.

I do think you need to be more gracious at times …

Sorry, I really meant no disrespect at all. I’m sorry if I offended you. That was not my intention at all. I just don’t think that the Fog of War style suits this particular situation. Again, sorry, if I was rude. That wasn’t my point at all. We all have different tastes when it comes to the graphical side of things, I guess.

Again, sorry, if I was rude. That wasn’t my point at all.

You may wish to consider what I said about “lids” for your issue … That was what I took from your original post. Unless I have missed your needs?

Ok, but I thought “lids” was part of the Fog of War look.

Again, I don’t think this should be the issue here. This must be solvable some other way. I am guessing this is a tile issue, as @travus suggested. To implement Fog of War I feel is way too much work for this issue in this particular area. I don’t have these issues in my other areas…or at least not that I’m aware of. For this area, this is a small annoyance. One that I would like to get rid of though.

The function you mention ExploreAreaForPlayer is (iirc) a NWN1 “Fog of War” map clearance. i.e. For this reason I don’t think it does much in NWN2. If you have been successful with FALSE, then that is something of which I am unaware it could do. That is what made me think of FoW.

Yet, you can achieve something similar to what you describe using “lids” and “blocks” that hide sections of your map, which you then destroy as I said. I use BOTH systems in my campaign. The FoW is the best for “maps” in general, but the “lids” approach is best suited for actual gameplay to prevent players being able to see into sections that should not yet be “seeable” to them …

The problem arises when we have tilesets that either do not have sections to block line of sight (caves) or have an issue with doors, which maybe is what you are trying to do via tilesets. However, “lids” is a good system to use and one that you can control quite easily enough.

By the way, the FoW system comes with a setting that blacks out both map and mini-map or either. I am just mentioning it for completion. It is also completely configurable, meaning you can use that part and have none of the “partial” FoW removal if you did not want that bit.

For clarification though, “lids” and “blocks” is completely different and requires a different approach.

@andgalf The Fog of War (outdoors) and the black-block (indoors) are entirely separate techniques.

iirc the black-block is a placeable …

I took a close look at the area in the prefab. I would split that area into two areas, one for the caves and the other for the serpent temple. It’ll save you a lot of headaches if you do that.
It’s easy to duplicate the ‘serpent_fangs’ area and just delete the sunken ruin tiles and all their related objects in the original area. Then delete the cave tiles and their related objects in the other duplicate area. 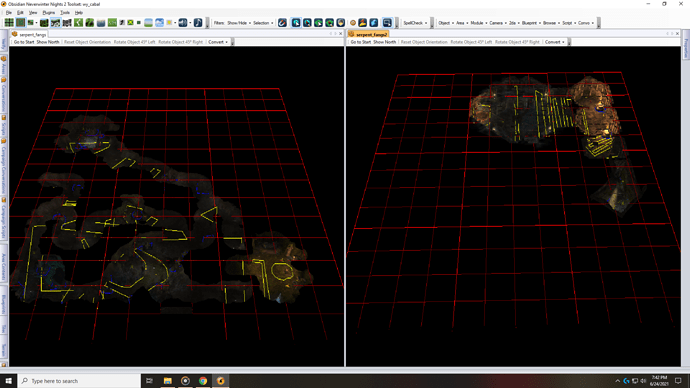 The Fog of War (outdoors) and the black-block (indoors) are entirely separate techniques.

Oh, I’m sorry. I didn’t know that. Thanks for letting me know. I think the one I’ve seen then is the one outdoors. Maybe the black-block would work for me then…Is there a link to something like this on the vault? I would in that case need to take a look at how it looks from screenshots before going that route, I think.

I would split that area into two areas, one for the caves and the other for the serpent temple. It’ll save you a lot of headaches if you do that.

Ah, yes. Maybe you’re right about that. Follow up question: When doing something like this (and I’m not that confident when messing with areas since my knowledge is a bit lacking when it comes to this), could I reduce the sizes of those two areas or would that mess with things. How is the best way to about something like this? I think I’ve tried reducing sizes of areas before, and sometimes it has worked pretty well, and other times I think I’ve made the game crash, if I remember correctly.

Maybe the black-block would work for me then…Is there a link to something like this on the vault?

there’s a couple of placeables

and they’re just big black blocks. I guess you plop one in a room, size it to fit the room (or corridor or whatver), and give it a unique tag so that you can destroy it uniquely when the door opens (or whenever the subarea should become visible to the player) …

@kevL_s This is quite funny, actually. I just began doing what @travus suggested and found that between the rocky area and the sunken ruins area, I found three placeables called tileblock, and I was just about to ask about that, since I think that could have been part of the problem, when you brought it up here.

They seem to have placed this tileblocks just as a tall wall between certain areas here, but it’s nothing, as far as I can see, that blocks any viewing of anything. I’ll see if I can try something with that, but I think I’ll just do it as two areas first, as travus suggested.

But I don’t think the blocks are supposed to block line of sight from the PC perspective. I believe they are intended rather to be rendered on the area-map and/or mini-map (since they are placeables, which get painted on overhead maps). Hence the floor/walls/other placeables/etc can’t be seen while the block is in place above them – it’s all just black on the overheads.

but they might well block LoS also (depends on a setting in Placeables.2da)

Alright. I’ll see I can make use of them then.

So far so good. I have carefully copied the area, and now I have removed all the cave stuff and resized it and rebaked it. It seems to work ok. I hope I haven’t caused any problems. 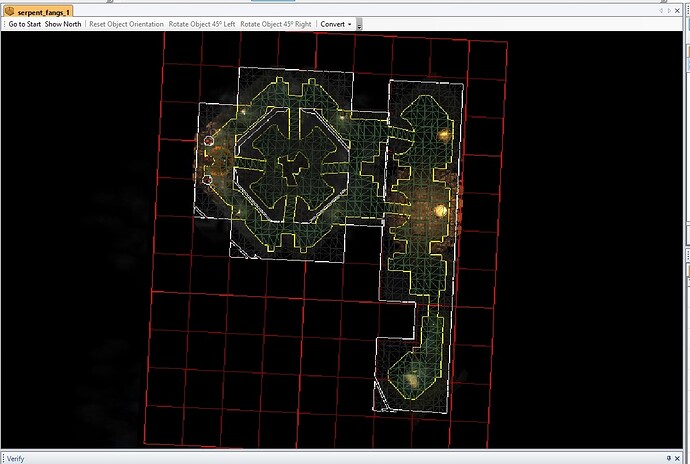 Things are getting a bit odd now. I have erased all placeables, effects etc. and tiles that I don’t want in the second area, but for some reason, even after baking, the toolset seems to think that there are tiles left that I haven’t erased, even though I have erased them. I don’t get it. If you look at this picture here:

EDIT: Ok, it seems to work anyways. I’ve used the tile blocks now and it actually works really well @kevL_s. The only thing I wish, and that doesn’t seem possible, is that the secret cave door I’ve placed could be made not visible as a door. I made it static, but that made it totally invisible, making it seem like there was a hole in the wall instead. Maybe if I use a normal placeble cave wall, or something, and destroy it at a certain time and spawn in the secret door. A bit convoluted, but maybe the only way to do it…at least the only way I can think of now.