I post this here with my two questions, firs the easy one:

Does anybody know about a script that allow you to randomize the design of a piece of clothing? My system creates random items (properties) based on some designs available in the palette but I would like this to be based on completely random items, maybe not 100% random like mirror left and right side and maybe try not to mix plate and leather in the arms but not really a concern.

I don’t think is something difficult to do and I’m able to do it but if this were already done it would be better and faster for me.

This to me is the most difficult one. I tried Infinite Dungeons and seems that the dungeon is generated randomly but I don’t know how they do it. I tried some scripts on the vault but they either build a dungeon with placeables or just have different areas that are chosen randomly.

My idea was to create a set of different areas, 10 caves, 10 crypts … etc (or more) and whenever you enter a cave, instance one of the designs (I want to instance all the dungeons but that’s another thing).

So I was wondering if anyone have done this before or know at least how the Infinite Dungeon works.

Thanks for any feedback.

This is the first time that you have posted. Welcome to our community!

Both are available in the vault in severall versions.

Just search for “random”.
YOu have to look what suites you though:

They are not what I am looking for. The clothes one is not random, and I quote: “the NPC’s will be equiped with one of 10 custom made suits (included)” so is just 10 designs.

Regarding the random dungeon I just saw that is just a bunch of different areas and the randomness is in the interconnection, no areas are generated randomly.

What you are looking for in terms of clothes is also available, just search through teh vault.

The dungeon generator however:
https://neverwintervault.org/project/nwn1/script/random-dungeon-map-generator-wip

Shadooww is working on one but it is work in progress and no ETA when or if it ever will be ready.

I already looked at that and what you pointed only generates a map layout not real areas or a big random area.

Regarding the clothes, I know about the vault, that’s why I’m posting here because someone might already know that better than me but I can’t find anything for that. Drupal search is not very good in that regard.

Drupal search is not very good in that regard.

You have no idea how often I have cursed the search engine on this vault. >.<
Mhm hmhmhm …

I don’t think you can randomize or even modify terrain once placed (aside from terrain animations). Please anyone correct me if I’m wrong.
EE has a script command for making copies of areas, which would be awesome since you can then modify a copy of your base area and simply have it be deleted entirely when the last person exits. That function is why I’ll probably end up getting it, myself.
The random clothing should be pretty easy. It’s not like it’s ever for sale, it’s drop-only by nature, so whatever script drops it needs to check for its ID and then apply changes to appearance after the item is generated.
If you want synchonicity randomize one side and copy the result to the other.
As the set armor values increase you go from naked to full plate; if you set the random number low enough you wont roll armor pieces at all.

That’s why I was asking if anybody knew how Infinite Dungeon works as far as I know it generates random dungeons but I’m unsure how it does.

My approach was going to be have several areas and choose one at random with copyarea.

Regarding random clothing, I haven’t seen a package…

You can desk-check the concept by modifying all the parts of an armour according to random dice rolls in the toolset. I think you’ll find that many combinations look strange.

Alternatively, you might want to choose from a table of, say, thighs that look OK with a given chest piece. I can provide hints on how to do that.

The actual scripting would involve placing (or creating) an item from any convenient template, applying CopyItemAndModify once for each armour part, then deleting all but the final item.

If the clothing is just to be placed in containers, fine. If it’s to randomise the appearance of creatures, that’s a whole new topic, as there are engine issues with that.

You can make a preset treasure chest with clothes of your choice and then have it randomly pick on the onspwawn event and equip them via SiliconScout’s Treaure System 1.8a. (tried to find the link, but nothing is showing again…sigh)

I think random clothes would look bad.
You’d need an algorythm that determines certain things and prevents others from not happening.

I’d rather suggest build some clothes manually and then have them be randomly placed on npcs.

Based on how many stupid combinations of color and items there are possible and how few which would actually look god and make sense, your npcs will allways look mostly stupid than cool.

Well, based on all your feedback what I will be doing is to get a random design from the already designed armors and clothes in NWN, remove all their properties and then add the random item properties from my system. That way there will be enough designs.

What i can also do is to create 10 clothes, 10 robes, 10 light armors, 10 medium and 10 heavy armors with a completely different design each of them and just change the torso for the appropiate AC, for example, I can design 10 8 AC armors and if you roll for an AC 7 armor, just change the torso and keep the same design.

Regarding dungeons I’m still looking at it. I’m very intrigued in how Infinite dungeons does it. I tried to contact Elidrin with no luck yet.

Before Infinite dungeons, i think Elidrin made RDG9 (link in Talime first post) using the same ideas as Infinite. As it is not premium, you can study rdg9 easily. Maybe it is a little crude, but it could be a start. I am interested too with the random area creation thing. If someone knows of better than RDG9, please share that wonderful knowledge.

Ok, it doesn’t generate areas dynamically, they all exist: 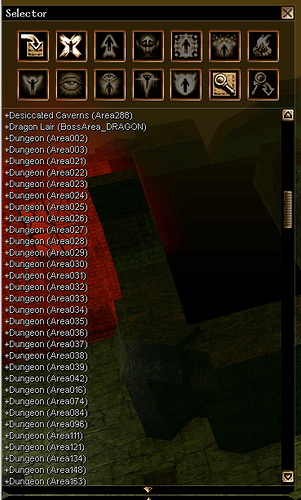 So the system then is “simple” I thought it created, somehow, areas dynamically but no, they all exists and it justs connects them plus all the changes in encounters and behaviors it might do but my main mystery is solved.

Now I have two options:

1 - create something similar, lots of predefined designs that they are then interconnected or just 1 level dungeons.

Now, I am wondering, have anyone got his hands on the unencrypted premium modules? they were decrypted by somebody long ago but they did lack the scripts. At least you could see the areas and get some ideas. But damn, is the internet old … none of the links work.

You could try creating areas but not connecting them in the toolset. Place a waypoint and transition with a number coded tag at the start point and end point for the area and then the first time you use any way point have your transition jump the waypoint with a randomly generated number.

You can probably get away with it just using the area transitions in the same fashion, I just tend to like waypoints for accurate positioning.

It’ll be fiddly, particularly the reverse transition, but should work.

What I will end up doing is to create a lot of areas, and then select one at random on enter and create a copy of it so is instanced (if you are in a group you will go to the instance of your leader …) and make some of them multilevel etc …

I will look for some prefabs so I can skip mapping some of the dungeons to save some time. That’s why I was looking for a way to randomly generate a dungeon.