My original intention to upgrade Seasonal Forest v10 for EE has turned into a full rebuild. LoW’s meshes have too many faces and quirks to make this a reliably performing set under EE. Thus, I’ve started over, using a combination of CM3-fu and hand-modeling to fix the numerous issues with this tileset that inhibit its performance.

I have noticed several tiles have animation keys for meshes that shouldn’t as the only animated feature on the tile in the game are falling leaf emitters. There are also several cliff tiles where the middle of the cliff slides back and forth - very strange.(edited) Therefore, I’m also deleting these erroneous animation keys.(edited)

Current pace is 20 tiles per hour. At this speed, its going to take 146 hours, barring any major issues with tiles. Given that pace, expect to see an alpha for this overhaul on the Vault on or about the 1st of July.

As work progresses, I’ll be posting screenshots. In the meantime, here’s an appetizer: 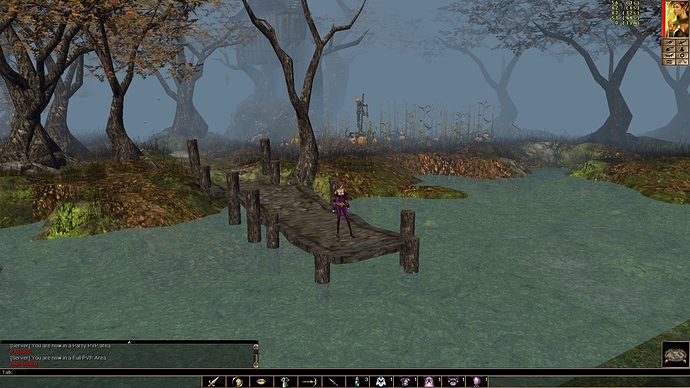 Yes! Thank you for taking this on. LoW’s work is still brilliant, but it certainly needs some updating. The water was a bit static. Mirkwood is still my favorite of his.

The water was a bit static

The water’s not static anymore - it moves as it should and, as the screenshot shows, is enabled for shiny water.

That is what I was saying the whole time. But nobody wanted to hear it. I never disregarded the ammount of work it was put into it, but as with other newer CC it was too detailed and too overcomplicated to fit into NWN for anything other than making beautiful screenshots.

But if you will fix this issue, this might be best tileset ever (again?). #MakeSeasonalForestGreatAgain

Well I heard you. So people do listen.

Hit a bit of a speed bump this morning with the cobble > water tiles. Seems that when LoW (or maybe Sen?) merged these into Seasonal Forest, they left the original WOK meshes as is, meaning that when walking in the water on adjacent tiles, you suddenly run into a gaping crater 2 m lower than where the toon is currently standing. 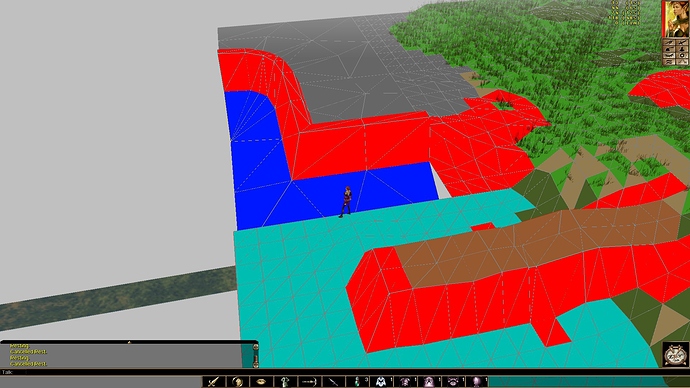 Needless to say, reworking these tiles is taking a wee bit longer, BUT when I’m done with them, you’ll be able to walk right up to the wall between the water and the cobble.

P.S. I love this renderaabb feature - wish I had known about it years ago.

Summer Cobble > Water is finished. Given the repetition of tiles across this set for the various seasons, I should be able to save myself considerable time by copying and reskinning these tiles for the other seasons. It should be just a matter of lining up tile numbers.

Before I worry about that, however, the next group of tiles moving through the models exported from LoW’s HAK are the Bridge tiles. Given that the bridge has a flagstone walking surface, I’ve changed the walkmesh material from wood to stone. These tiles are a lot cleaner than the Cobble > Water tiles and optimization is going smoothly.

While I haven’t done an actual file size comparison, I’m fairly certain I’ve been able to reduce the overall file size of all the tiles I’ve reworked so far by at least 30%, placing the “weight” of the set on par with TNO. Note, however, that I haven’t gotten too deep into the deciduous tree tiles yet but the few I have reworked have extremely “heavy” tree meshes and foliage meshes. Hopefully, linking the foliage to the animation nodes should help with load times.

I have been conducting testing using 8193.13 with 12x12 areas and have found an overall gain of 40-50 fps over the original set’s 70-80 fps. The biggest spikes occur on tiles with trees, but I’ll be addressing that in the not so distant future.

Full of admiration for you folk that can produce lovely looking materials and allow others to use them .Thanks.

Too many years working with NWN - 16 to be exact.

I’ve started work on the tree tiles, parenting the foliage mesh to the animation dummy and adding “falling leaf” emitters as necessary (the emitters are linked to animation loop 1). I’ve also added TXI files for the various foliage textures with an “alphamean” setting of 0.563. I was going to use “blending punchthrough”, but that didn’t eliminate the leaf edges (thanks to @Zwerkules - think it was him - for pointing out on Discord that all “blending punchthrough” does is make non-alpha areas of the texture render as opaque).

The deeper I get into the rework, the more significant the performance gains. The latest testing was showing fps of 105-115 near the water tiles (75-85 w/ “shiny water” enabled) and fps in the 135-155 range. Thus, I’ve slightly exceeded my initial guesstimate of 150; however, I want to see the range tightened (which I’m sure will happen as I process more tiles).

Note also that, on the tree tiles, I haven’t even optimized the ground planes yet. Thus, the fps will increase and stabilize even more once I’ve done that.

Here’s some screenshots taken from in game… 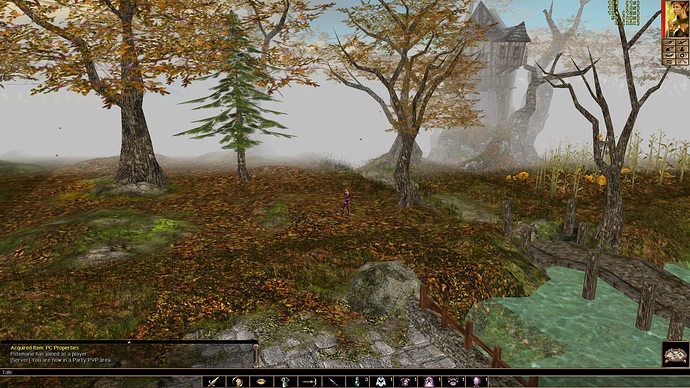 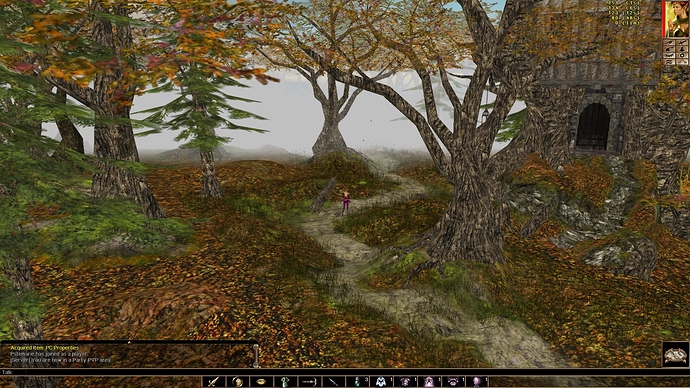 These screenshots were taken at full screen with the resolution set to my monitor’s recommended resolution. If I step back one resolution size, from 1920x1080 to 1600x900, the fps increases by 25%. So, if you’re noticing some general fps issues with EE, you might want to downsize the resolution you’re playing at.

All water terrain features have been fixed along with a host of walkmesh issues with the cobble>water tiles. As noted earlier, the water has motion and if “shiny water” is toggled on, it appears as it should. Note however, that using shiny water, the fps takes a significant hit, dropping a good 20-25 fps.

I found quite a few walkmesh anomalies with the winter tiles I’ve encountered so far. It seems as if LoW could not decide between using “snow” or “leaves” for the surface material. I opted for “snow” as that is what the ground cover texture looks like. I have removed the tree foliage (except for conifers), along with the “falling leaf” emitters - it just seemed odd to have leaves falling from bald trees.

Next up, I’ve got the stream tiles to rework and then I’ll be moving into more forest and road tiles.

After rigorous testing of foliage meshes parented to animation nodes vs. parented to the tile’s aurorabase, I’ve come to the conclusion that the minor performance increase gained by parenting them to the anim node is far weighed by the meshes not being fadeable - something that is necessary for Builders to be able to use the tileset in the Toolset.

But I’ll let you guys be the judges. Fading… 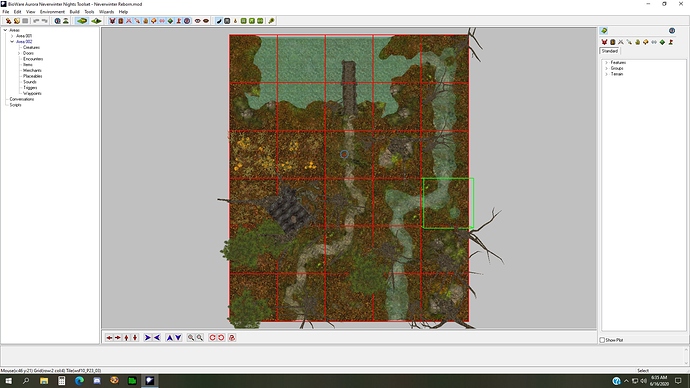 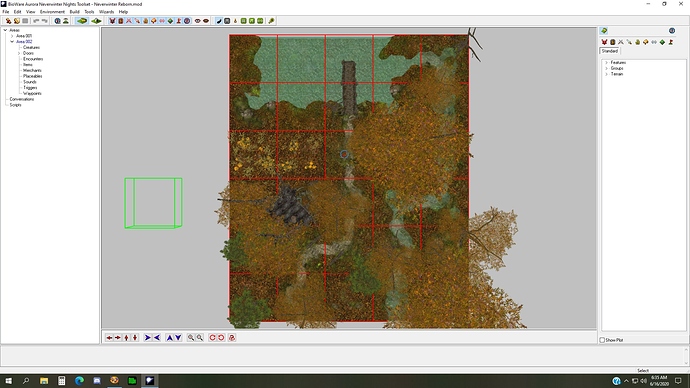 P.S. Just to clarify…I have no intention of reskinning the tileset with new textures. My plan is to consolidate textures where possible.

Forgot to mention, I’ve also begun the texture reassignment, replacing all LoW’s duplicates of TNO textures with the originals from the core assets. I’m not sure why LoW felt the need to make 100 duplicate textures - pretty silly IMO. That said, I have kept the color variants he made of the ivy textures as the original hues do not match the color palette LoW used.

Good stuff! Fading for sure. Much better for building…

Fading also helps those of us who get motion sickness when playing in first-person perspective. I have to play top-down with all of my video games.

I think that’s because his tileset predates 1.69 when tno got integrated into the base game.

As meaglyn said, fading is better for building.

I’m reading this thread with a satisfied smile on my face. Last week I saw that upgrade for Diademus Spidercaves and thought, if only someone does a upgrade for LoW Seasonal Forest.

ALPHA Build now available for download. PLEASE, do NOT redistribute this build in compilation HAKs. Once a final “bug-free” release has been made available, the package will be “Free & Open.”

I’ve started working on the buildings LoW made - removing the interiors, putting on properly sized doorways, adding windows, and fixing numerous walkmesh issues (shooting through walls, gaps, etc.) . While I know some of you might see the “removing interiors” and scream “NOOOOOOOOOOOOOO!”; the simple fact of the matter is that we have interior tilesets AND, on the all buildings I’ve done it to, it reduced the polycount of the building by half. 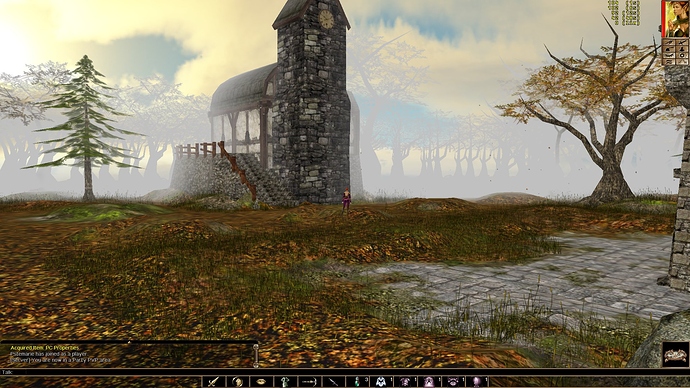 Big House 2x2 - with a proper clock (no its not animated

), not that diamond-shaped wooden wedge that was in its place before I got ahold of this set.

And a shot of the doorway (of course, I put a door in it, go figure!)… 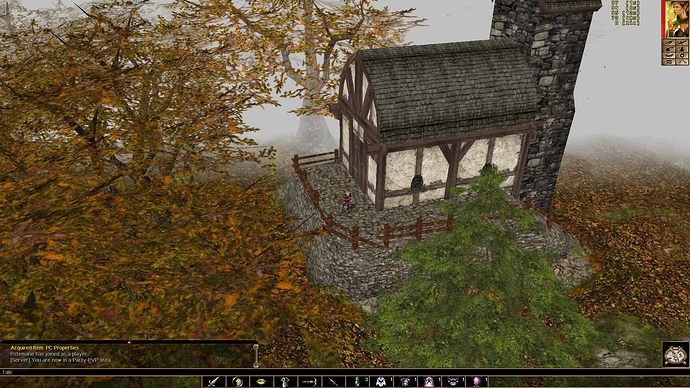 Thanks for removing the interiors. I’ve always found it silly when the roofs are so leaky that it rains just as much inside as it does outside. To be fair, I never tested that in LoW’s tilesets, but the tilesets I have tested, consistently applied weather effects (rain, snow, wind) on the “interiors”.