How do I prevent a recall stone from being used in an area? I do not know how to script this. Anyone know?

Or a script that destroys the recall stone on entering that area. Either one.

The scripting can be found in the OC.

OC?..what’s that and where do I find it?

There is a recall stone which doesn’t work in some areas and all the code you need is there.

Do you happen to have a script that destroys an object on entering an area to put on the events script of an area?

Sorry, I don’t have such a script.

But it sounds rather trivial, what’s this evil object which needs to be destroyed for the greater good?

I could not find how to open the OC (original NWN campaign module) in the toolset like you suggested to find out where those scripts are to not allow the recall stone to work in specific areas you want it to not work.

I am no scripter…I can mimick scripts by seeing something “like” the script I need and try to change it for my needs, but I can’t seem to find a script to do this in this case I need. I made an attempt with this script below, but it does not work:

That is nearly good (2 of three lines correct)

I tried it but I got this message on compile: 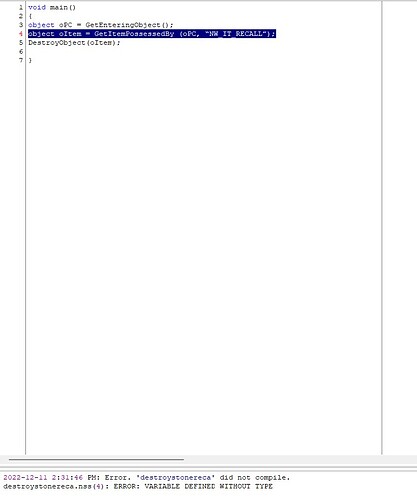 You probably cut and pasted the code, which on the website produces bad double quote characters. Backspace over those and retype them in the editor.

Hey thanks meaglyn…you were right I had copied it from here. I took your suggestion and retyped it and it complied and worked as it’s suppose to.

Mmat, thanks again for your help. I was close…but your script worked…lol…thanks man