I had advanced a lot in my current project to replace all armors and Cloth for PC and NPC using Eurgiga’s robe based armors, but I’m still in need of extra armor and cloth body parts to achieve the look I want.

Example of Project Q parts, but I stated, Project Q is too much for a project like this, I don’t need all those files. 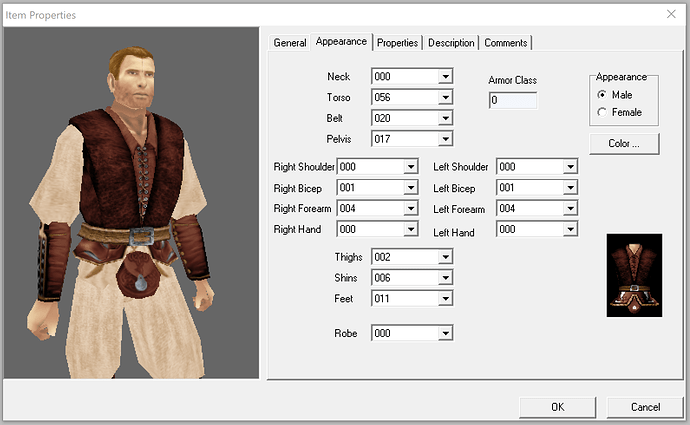 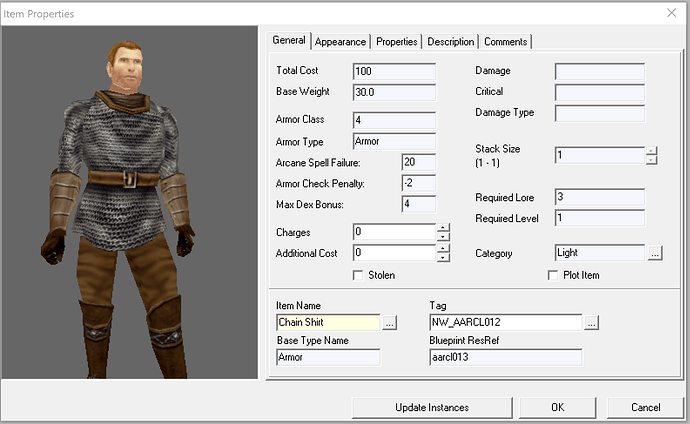 What good high-quality mods would you recommend to add more robes, cloth and armor part to my project?

Here are some screen of armors that I have already overrode in the OC using Eurgigas content, but I’m falling short in content. 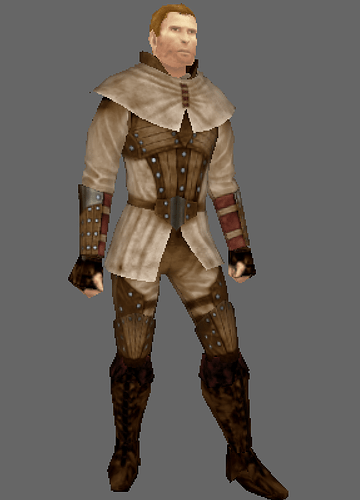 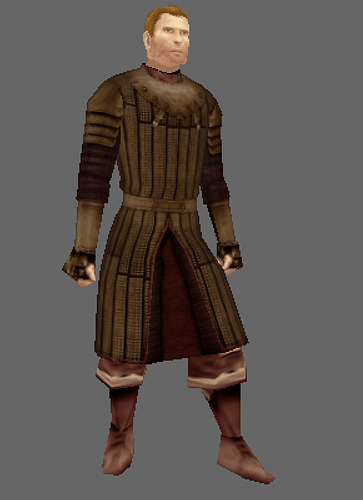 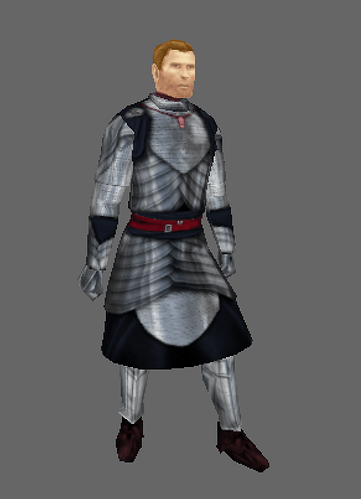 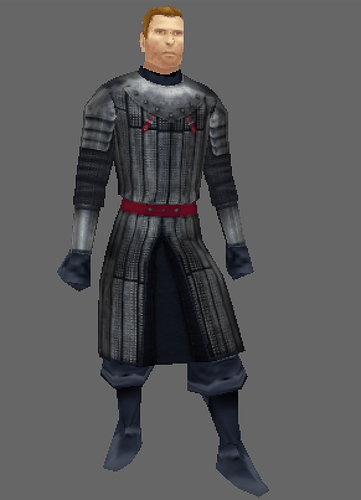 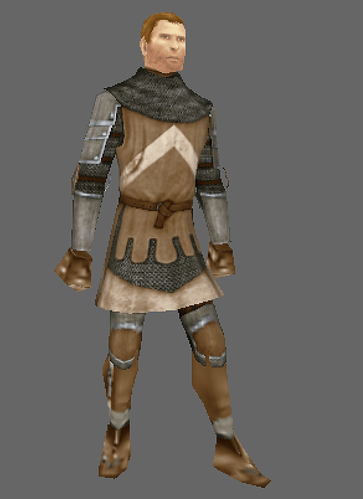 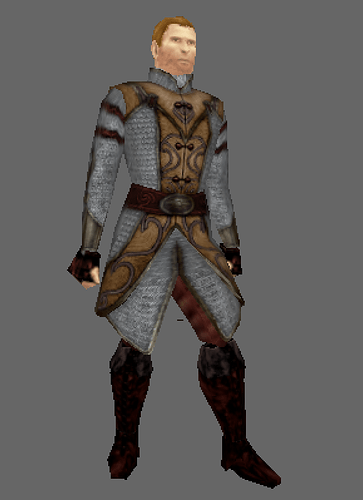 Have you looked at Lisa’s Surcoat & Tabard Custom Texture Templates? There are also pre-done ones in Lisa’s Clothes Horse HotU Padded too.

Someone once shared some very nice looking Snape and Dumbledore robe models with me, I could look them up if that interests you. Though I’d have to convert them to MDL, I do want to use them anyway.

Integrating armour parts from divers packages generally involved renumbering work in my experience, so arguably cherry-picking the best from CEP, Feanor’s Medieval Armoury or Project Q could be the way to go.

If you’re looking for something different from the European paradigm, have a look at these:

So, you are saying that is better to use Project Q or CEP alongside Eurgigas armors.

If that is the case I have two questions

2 What is better from your point of view, project Q or CEP?

Currently, my process is:

I’m not really qualified to comment on Project Q.

I chose CEP as a base because

I edited the CEP 2da files to include other models, bundled in a top hak.

Arguably CEP also has armour parts that few will ever use, but you can replace those slots with other custom models.

No doubt Q has good stuff, too.

Q has some really good stuff but as I recall a good bit of the armor parts (but not all…) are also in CEP. There’s quite a bit of overlap these days. If you don’t want all the rest you could pull out the pieces that are only in Q that look good to you. Doing the full merge to use both CEP and Q is a lot more work.

What you have posted, castagnopolis, looks nice.

Last night I was checking them both in the toolset, PQ has more selective and quality stuff (I like it more), but is too much for what I want to achieve. And like you said CEP is more used by the community, so I was thinking to make it CEP compatible and not PQ, also due to the fact that PQ it is too heavy and has too much stuff.

I have not played since 2006, and with the enhanced edition I got hooked again. But I hate NWN armors and when I saw Eurgigas work I said to myself, this is what I want, so I re-learned how to mod the game and now I’m working in this armory override HAK with a down to earth tone, to fit my taste for Ravenloft mods or grounded fantasy look.

The main idea is not to overdo it, it is just select a set of armors and repeat them to create consistency, the same for the clothing, That is why I’m working with earth and pastel tones, looking at images and illustrations of the armors and robes used at that time.

As you are a returning player from 2006 you won’t be aware of the Custom Content Challenge. It ran from 2010 to 2018. It contains a lot of quality work. I think that you may find these two months submissions have relevance to what you are looking for -

Totally agree, the default armors and weapons are horrible. In my building I’ve redone them all too but never as an override of the originals. It’ll be interesting to see what you come up with as an override

I thought it was the best approach to see them automatically in any module, how did you do it?

I just made new blueprints and then only allow those to show up in the module.

There’s no easy, fit-all choice if you want quality. I’ve been compiling what I like from a ton of different sources, and you have to go through it in a case by case manner. There’s great content for human males that has no simile for any other races/gender. The way I went about it was using Ascadia’s Complete Clothing as a base, and then adding anything I liked to it, overriding that which I didn’t. If Eurgiga’s approach appeals to you, CEP and PQ have similar stuff, but I find myself gravitating more towards imported content from other games, relying on elaborate models rather than trying to add depth through textures, which is the old way. I like your overriding approach, since I have pretty much overridden about 70% of armors in the game with my own designs based off Skyrim. If you intend to publish and share your work, however, your options are more limited. As mentioned, take a look at Ascadia´s Complete Clothing, CEP and PQ are very visible, CODI is included in most of these, but there are some great options that may only be acquired in obscure sources like PWs.

Agreed, override isn’t really suitable for publishing, because it impacts every module, and might break some.

One doubt, if overriding create too much impact in other modules, a thing that I know, and if I want to publish this project, what will be another method to replace the armors beyond overriding the content using hak patch method, because I really hate the NWN clothes and armors

Oh, Skyrim armors sound great, where did you get them, PWs means persistent worlds right?

While I see where you are coming from Proleric, I think that publishing an override patch hak is fine. People can use it or not. Any hak out there could be used as a patch hak and potentially effect people playing your modules. That’s just the way it works. I for one would be interested in seeing what OP comes up with.

There a tool called NWNArmory or some such that will make parts for all the other races given the human ones. I don’t have a link handy, and it doesn’t do robes unfortunately. But if you haven’t found that you should give it a try.

castagnopolis: Yes, PW is Persistent World, and some of them bear assets that aren’t readily available in any other custom content projects. Those tend to have rules against sharing or re-packaging said assets, because it is a unique feature of their respective projects. As for the other matter, I am all for overriding original content. The reason I mentioned it being a problem is further explained on my reply to meaglyn right below. Oh, and I didn’t get Skyrim armors! I designed Skyrim-like armors using whatever resources I have gathered throughout the years. As far as I know, there are a few individual assets imported or modeled after Skyrim, but no armor parts. For example, there’s a duergar project of said creatures wearing Skyrim armors, there’s an NPC hunter model ported, as well as a couple weapons and helmet models used as vfx.

meaglyn: Thanks for the tip! I don’t really need to have parts for other races because I only use the human models, but it may be helpful to the OP. As for the other matter, I wasn’t against overrides. In fact, I have been very vocal about anything overriding original game assets. What I meant is the addition of custom content into projects to be shared usually needs the permission of the authors, and the more obscure or elaborate won’t give said permission.