Had to break from my Roman Wars since we started a new school year. The challenge was to start something new so that we all started at the same time. I chose this often overlooked module as my start point. Here’s what I have so far: 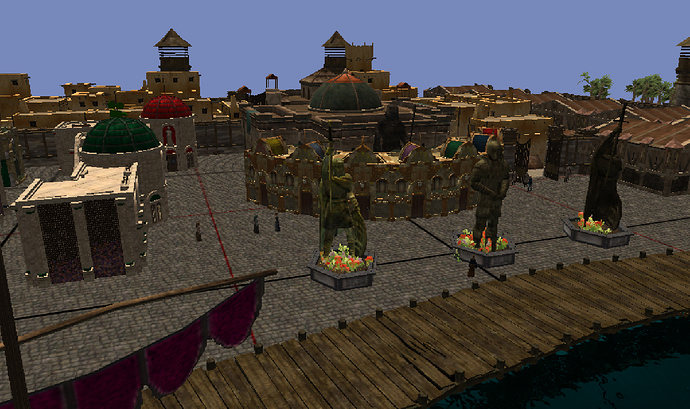 So I returned to Akesoli and have made progress on it. This will be a short, standalone campaign with possibilities to continuing into the other phases of the module.

Premise: Set in the “Known World” country of Darokin, you have been assigned to assist the local Border Patrol officer in finding out why the Desert Nomads have disappeared from the city. Three companions will be met which will aid you in your endeavors.

I’ve divided it into two modules. Here is a map of the main city of Akesoli: 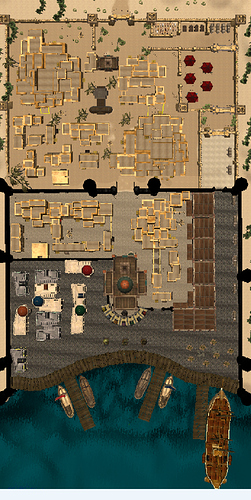 I like that it has the “look” of a small city. Not just three buildings with a sign outside that says, 'city of … ’

I like big areas and I think this looks good from a placeable placement point of view.
I don’t know how finished it is, so you can take what I say seriously or not, but a small tip/trick is: Slightly raise the terrain around the buildings so that they don’t look so flat on the ground. This will make so much difference on the overall look of such areas.

Do you mean the bricked area too? The design is supposed to be bricked at the docks (for the Darokin people), slightly mixed in the middle (some brick, some sand) and then sandy on the desert side.

What would you recommend?

The way I do it, is I put some grass and dirt close to the base of the homes. The street might be cobblestone but there is moss and grass growing near the base. That way raising the terrain slightly at the base doesn’t look weird. In my opinion a raised/uneven cobblestone looks bad, that’s why I add the dirt.

At this picture, the left home has a very slight terrain elevation near the base, while the left none. I think it makes a difference. Perhaps not so much here, but if my whole city has it.

And here something you shouldn’t do. I’ve seen it some times and it hurt my eyes so much that I felt I didn’t want to play the module.

You could do the second in desert/sandy or snowy villages but not as much on cobblestone streets. Just my opinion

edit: and always try to go over your terrain multiple times with your textures. For example, add some dirt with 80%, then grass with 70%, then a different dirt (if allowed) with 60% and with bigger outer circle. And just play with it until you have a nice blend. Even cobblestone streets would have cart marks or places of dirt where a bottleneck exists.

I love the idea of your mod but some aspects can be improved.
@raymondsebas made a short tutorial on this subject. Ask him for some advice at worst he will say no.

Continuation with some graphics of the short pseudo-guide that I have just written some hours ago. If it can help those interested. [Guide_001]

Great advice. I used the “noise” brush and went over the sandy area (though I need to smooth the walkways a bit), and it does look better, especially because of the sand feel to it. Not the best but a work in progress. I may have to take most of the ideas as lessons learned when I start a new one however.

I also like the idea of having the ruts in the cobblestone area. Just need to break away from the eTeaching a bit.

I saw that earlier and was stunned by what you could do with the textures. I’m usually more focused on the storyline. I may not be able to do much with this one but in the future I’ll be taking more of the tutorial into account. Thanks!