Reduced to level 1 Fighter the moment I enter Fugue Plane

I had several bad bugs in the OC that people here helped me with. One of them, casters (Sand and Qara) running in place happened in MotB as well (Safiya).

However, near the end of the game, I am facing a severe and debilitating bug AGAIN. The MOMENT I pass through the Betrayers Gate into the Fugue Plane my main character is reduced from a level 10 Wiz, 10 Red Wiz, 10 Scholar, to a level 1 Fighter taking all of my spells and abilities with it. Reloading to a previous save restored my character all the way until I passed through the gate again. I have the Complete Edition from GoG, and to my knowledge, it is fully updated. I had never experienced these bugs in the CD-Rom versions that I had in years past. At this point I am not sure if I am looking for help so much as I am posting about my experience here in case anyone else has the same issues.

if you upload a save just before the Betrayer’s Gate and provide a link, perhaps someone with Gog Complete Nwn2 will run through it to see if it happens on their system too …

Can you by chance walk me through how I would do that?

By default, saves are found on C:\Users\Computer\Documents\Neverwinter Nights 2\saves

You just need to upload one of the folders there (for example 000000 - quicksave, is the quicksave slot) so we can download it and load the game from there

I know where the saves are, but what I don’t know is how to upload a folder here. There is no insert or attach option anywhere that I can see.

another site i’ve had luck with is http://www.tinyupload.com/

whichever you choose, look for no registration, set the upload as temporary if possible, and have your save zipped up as .7z or similar

and make sure you copy the link it provides right away,

I used both options above, just in case one didn’t work out. I am constantly surprised by how quick and friendly you all are here on this site. Thank you. I am retiring for the night. I’ll check back later. Thanks for looking into this.

This is the save when the bug has already happened? Do you have a save before entering the fugue plane by any chance?

Also this game lags like crazy and whenever I move it teleports around the room, never seen anything like this happen before.

The teleporting is what I was talking about with casters. It happened to me in the OC with Sand and Qara (PC was a fighter) and in MotB with PC and Safiya.

And no, that save is from before I went through the gate. I loaded it up before I posted it and it was correct. Are you saying it loaded as a level 1 fighter for you?

I reloaded it, now that save has a level 1 fighter. It did not before. I have no idea what could be causing this.

No, it’s happening to me too, without any override.

There is not and never has been anything in my override folder for MotB. The only thing I have ever used outside of base game is a fix that kevL gave me for the first major bug I had in OC.

The “good” news is that the game still somehow recognizes the old classes on the loading screen, as they are still there in the proper places of the player.bic file.
And it’s also still counting as a level 30 HD character…
However, all those high stats, is that normal gameplay? Those ability scores are very high and almost look like some editing in the player.bic file was done, is it possible?

Ok, I fixed it. A super stacking bug happened on the Staff of Balpheron, this probably caused the loading of the character to stop after a while, maybe there’s an infinite loop there somewhere

What I did was unequip the staff, re-equip it, and then I changed zone: after the autosave the character was fixed. 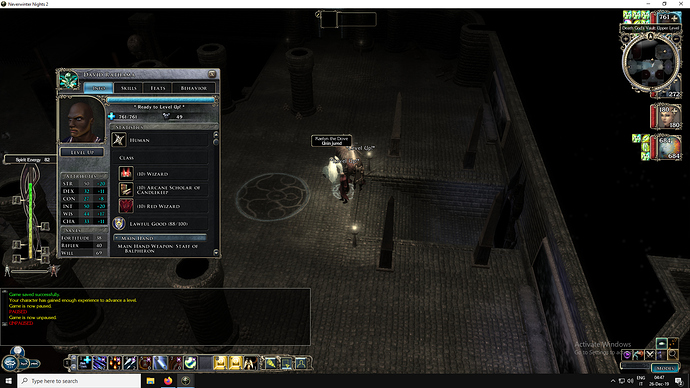 This also fixed the crazy lag and teleport issues.

Ok, I can confirm it, it’s the Staff of Balpheron.
When the game is loaded, a bug causes its properties to stack upon themselves (at every reload).
In your case, you had probably stacked the abilities so many times that the item properties were so many on the staff that it broke the character file entirely when the game loaded it.

Unequip and Requipping the staff fixes the issues temporarly, but with every reload, the properties will beging stacking again, eventually this bug will return, so watch out.

You can see here how many properties had stacked on it with the save you provided: 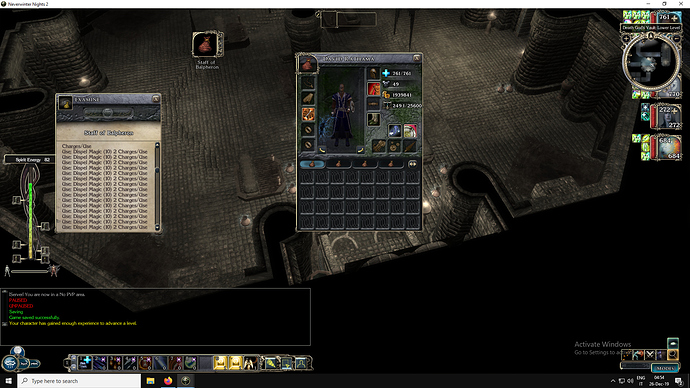 To prevent the bug from ever occuring again in the future (you will still need to equip the staff and change zone the first time), extract this file in your override folder.
It was just a bug with the stock script after all.

Most of the major issues I have had have been with characters that have had the Staff of Balpheron, so that makes sense. Thank you for your information. This fix you posted, can it be used with a save already made? OC and MotB are done, but if possible, I’d rather not restart SoZ and my main PC is using the Staff as well.

To answer the question about stats, its cheating. I am not an ashamed cheater. I have played and beaten this game literally at least 20 times (Though that is not including SoZ. I actually have never finished SoZ), so after the first few playthroughs I indulge myself to some cheats. But cheats are all I do, I do not edit files or use mods or anything like that. Just feats, stats (Not over 50), and major items.