Sanctum of the Archmage: The Novels

For those interested, I’ve launched a new, e-commerce enabled site for publishing upcoming books in the Sanctum of the Archmage series.

I plan to begin with a re-release of my first novel in a series of novella-length “episodes.”

The Return of the Horde Now Available!

I’m pleased to announce that The Return of the Horde , the first of four parts or “episodes” in my novel, Hell Gate, is now available from my new Andarian Publishing website. You can buy it in kindle, epub, and pdf formats. The book will be delivered by BookFunnel, a great (and growing) indie book fulfillment service that also has its own e-reader app for easier reading.

I’m going to publish each of the four parts there at about six week intervals over the course of the spring and summer. In the fall I’ll collect them into a single e-book, which I’ll also release to selected e-book stores. That’s the pattern I plan to try to follow for all of my books going forward.

As a note to any of the few individuals in the NWN community who may have actually purchased the earlier version of my first novel, Dawn of Chaos, before I took it down two years ago: Hell Gate is an edited and much-improved re-release of the core of that novel (chapters 4-23). The Return of the Horde covers the first five of those chapters.

For those interested, I just had an interview published on my novel and game writing projects in Liberty Island Magazine. My thanks to Tamara Wilhite for arranging it, and for doing the interview.

An Interview with Author Tony Andarian

An update on my publishing plans for this summer from my new book site, with preliminary covers.

A new constitution prepares Carlissa for an era of enlightenment. The harsh traditions of the past fade, and a promise of freedom stirs the air.

In the space of one terrifying day, that promise is shattered in a bloodbath of fire and magic.

In Sanctum modding news: with thanks to them for reaching out, I’m in the early stages of preparing Sanctum Chapters 1 and 2 for inclusion in Beamdog’s “curated content” listing. It’ll take me a while to find time and I’ll have a bit of work to do in tracking down the CC authors whose permission I’ll need, but I’ll post further when I have an update.

At the risk of being cheeky, any chance of asking Beamdog for their thoughts on the Mac mountain issue? It brought my adventure to a close and I was really enjoying it. Mind you, I now have Bootcamp on my Mac so might be able to get it to work natively on Windows . . .

I’ll see what I can do about it once I get back to development on the project.

I try to limit how much publishing news I share to the Vault, but I thought this might be of interest to the readers here. It’s an excellent video review by a gaming vlogger of the first book in my 𝙎𝙖𝙣𝙘𝙩𝙪𝙢 𝙤𝙛 𝙩𝙝𝙚 𝘼𝙧𝙘𝙝𝙢𝙖𝙜𝙚 series, 𝙋𝙧𝙤𝙡𝙤𝙜𝙪𝙚 𝙩𝙤 𝘾𝙝𝙖𝙤𝙨. In addition to some insightful observations about the story, he goes a bit into the tradition of fantasy-RPG inspired fiction (including Neverwinter Nights) that it grew from as well.

In other news, I’ve recently finished a “wide release” of the first volume of my Sanctum of the Archmage novel series, Dawn of Chaos. (“Wide” means it’s available from all major e-book stores, not just on my website or on Amazon). It’s currently out in six novella-length “episodes,” although I’ll be combining the middle four into a novel-length release in a few weeks as well. Those interested can find them here:

My first Sanctum of the Archmage novel, 𝘏𝘦𝘭𝘭 𝘎𝘢𝘵𝘦, is now available from Andarian Publishing, and for pre-order on all major e-book stores. 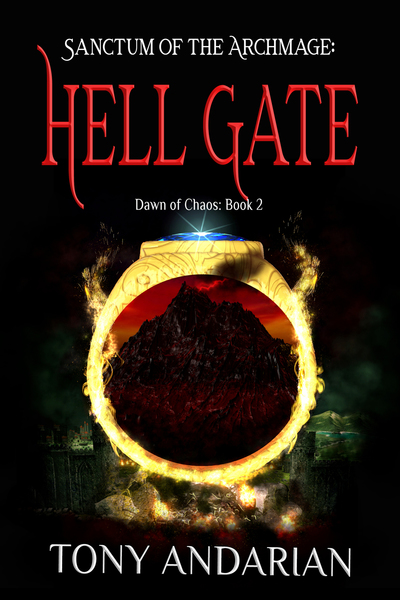 It wasn’t demons, death, and slavery to the Dark that truly frightened her....

Hell Gate will be available exclusively from Andarian Publishing from August 19 through September 1, 2022. It is also now available for pre-order, and will be released on all major e-book stores, on September 2, 2022. A limited number of advance...

Because of the saga’s roots in Neverwinter Nights, I’d like to include the community in an ARC (advance reader copy) offer that I made to current subscribers to my monthly email newsletter. Free copies of 𝘏𝘦𝘭𝘭 𝘎𝘢𝘵𝘦 are available to the first 30 subscribers who claim them. This is partly a way for me to try to encourage some pre-release buzz and reviews, and partly a way to try to say “thank you” to some of the people who’ve supported my work over the years.

If you don’t mind trying out a monthly email subscription to a newsletter that tries to mix news about my book and game publishing with a discussion of trends in fantasy fiction and RPGs, you can find the link here. There’s no commitment; you can unsubscribe at any time.

Duly subscribed and looking forward to a read of the book !

Is there any word for us of how the curation of Sanctum by Beamdog is going?

I’m proud to announce the re-release of Sanctum of the Archmage, Volume One: 𝘿𝙖𝙬𝙣 𝙤𝙛 𝘾𝙝𝙖𝙤𝙨. It includes all three books in the saga’s initial trilogy, Prologue to Chaos, Hell Gate, and Aftermath. There’s a launch sale price until next Sunday, as well as a (limited supply) offer for a free copy to anyone willing to subscribe to my monthly newsletter.

It wasn’t demons, death, and slavery to the Dark that truly frightened her....

A new constitution prepares Carlissa for an era of enlightenment. The harsh traditions of the past fade, and a promise of freedom stirs the air. In the space of one terrifying day, that promise is shattered in a bloodbath of fire and magic. ...

Thanks to Jimdad for asking about progress on the modules, and my apologies for the ongoing delay in getting back to that. I’m hoping to resume work on them in the next few months, but I’m finding that making time for all my projects is more of a challenge than expected.

Is the curated content effort still a thing? I haven’t heard much about it, although I’ve been really out of the loop for the last year. I would like to see the first two mods packaged so that they’re easier to install and play. Alternatively, I could just get right back into continuing development on Chapter 3, especially since the PQ update looks like it may be on again. Any thoughts or advice on which way I should go?