Okay, here’s my attempt at a shocker lizard, as it appears in-game: 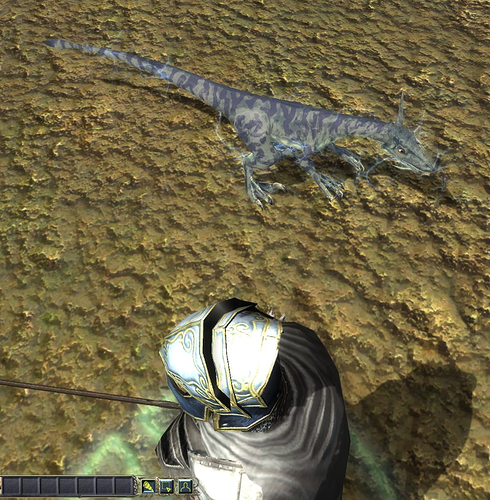 I gave it a visual effect similar to the electric weapon (which you can’t see very well in a static shot), plus a slight glow. The question I have is how would you script up its special attacks? Any suggestions?

That depends on what you want the lizard to do.
It could have a lightning damage shield that strikes melee attacker when they damage it. This could just be a permanent supernatural effect set on her (with proper non stacking failsafe) when it spawns and on perception (just for double checking, should the effect wear off because of any particular reason).

Extra electrical damage could be added on the creature’s natural weapon properties obviously.

Another idea would be a lightning breath, this could just be assigned via the spelllike abliity editor in the editor. The same could be done for spells like call lightning, ecc…

In the end it depends on the power scale of this critter and what you intended it to do.

Yes, lightning breath might work. It has a short-range attack it uses in preference to a rather weak bite, so a breath weapon would simulate that. There’s also a group attack that scales with the number of these beasties within 20 feet.

That rings a bell… I don’t remember exactly, and I’m not at home to check, but maybe there’s something to change in appearance.2da and spells.2da

Yes I’ve been checking the various columns of the spells.2da file. I’m wondering if it needs a particular animation? I took a look at the beetle animations (per the Bombadier Beetle acid cone attack) and it has one additional animation: ‘c_beetle_UnA_specialattack01.gr2’.

Easy to find out: just copy an animation of the shoker lizard, rename it […]_specialattack01 and see if that fixes it. I’d be surprised though, I don’t remember having needed a special animation for the breath weapon.