Could somebody help me please? I’m trying to use this hak pak, but I can’t get the glowing-in-the-dark
armour. Don’t know what I’m doing wrong. I merged the 2da row of Shadow_Warrior into my own appearance.2da. It shows up in the toolset but It’s only a man all in black body-suite: Shadow Warrior | The Neverwinter Vault
For me, ingame, he doesn’t even have a head: 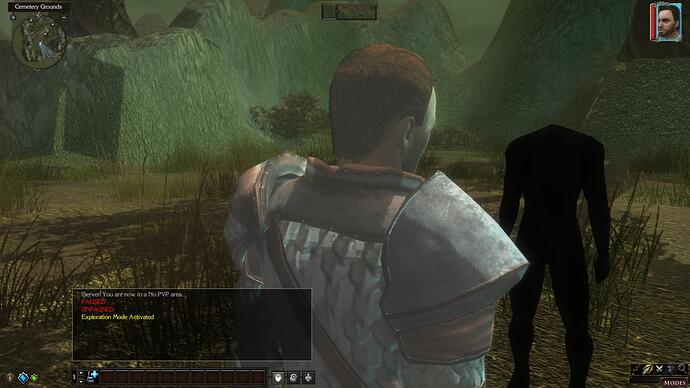 andgalf… That definitely doesn’t do what it said on the box !

It does say in the description make sure the person/ thing is male so that might be it. Or it could be that all the missing bits are armour and that’s what is missing in the appearance stuff.

For me, ingame, he doesn’t even have a head:

That’s because there’s a mistake in appearance.2da: change the first 0 after 107890 to 1 (that’s the value in BodyType column)

It’s only a man all in black body-suit

Usually, that comes from a tint value of 0,0,0 (when the model is tintable, no effect if no tint map is present, so adding tint maps can be annoying, when all existing blueprints appear totally black because of the default 0,0,0 instead of 255,255,255).

Thanks for the replies. I’ll try and change the value in the 2da then.

I found how to get some of the glowing armor. I had to go to the different body parts in the Armor Set but I still can’t find the legs, only the knees and shoulders. I can’t get the glowing blue eyes either. I guess that could be achievable through some sef editing?

I can’t get the glowing blue eyes either.

Or you just use one of the existing “eye” effect in the visual effects slot. For example:

What can one do about the legs? Can you get them to show?

What do you mean, “to show”? They’re normally part of the main body, and from the knee to the foot it’s the boots item that defines the model.
If you’re talking about the glowing part, I guess you’ll have to go to the “set of armor” tab of the creature’s blueprint and add the relevant accessory parts (knee / thigh).

If you’re talking about the glowing part, I guess you’ll have to go to the “set of armor” tab of the creature’s blueprint and add the relevant accessory parts (knee / thigh).

Yes, the problem is I’ve done that, but as I said:

I had to go to the different body parts in the Armor Set but I still can’t find the legs, only the knees and shoulders.

Can you make the glowing leg parts to show up when you try?

Can you make the glowing leg parts to show up when you try?

Looking at the files from the link, I can tell that only the knee and the shin have a model, there’s nothing for the thigh.
Additionally, there’s only one model available for the shin (#80), so if you’ve got other custom content for armor accessories, maybe there’s a numbering issue. 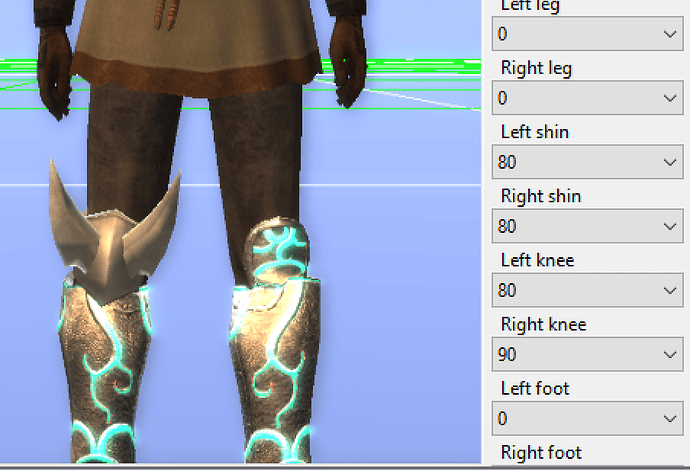 EDIT: Somehow I had missed that there was a shin part. Now it seems to work. Kind of…

Now, my version looks like this. The helmet and braciers seem to be missing. I’ve tried everything but haven’t found any braciers in the files. There is a a_bracer80_i.DDS but I don’t know if that file points to any mdb. 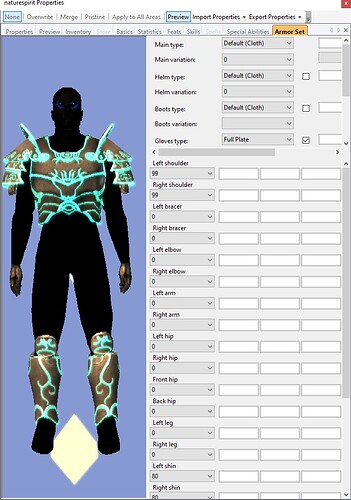 EDIT: I did some editing on the c_shadwar_cl_Gloves01: 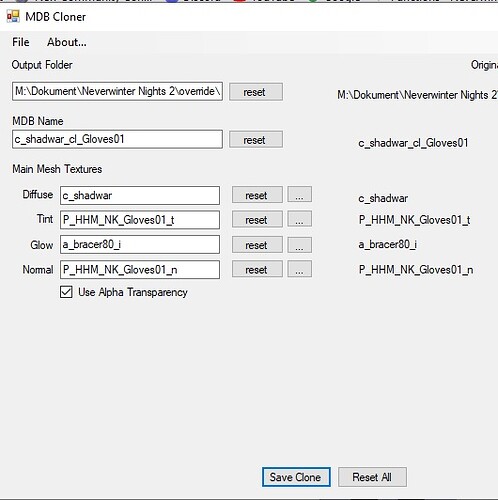 which got me this: 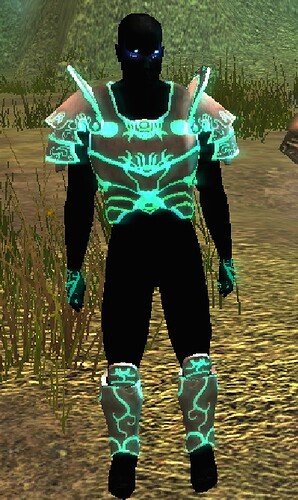 The dds file “Invisible” seems to be missing too on this file: 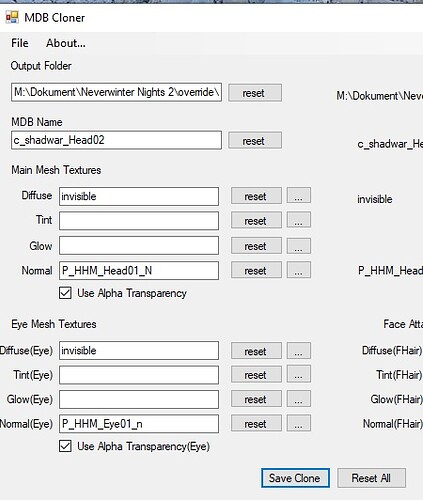 I wish I could make everything look like this (but without the swords): 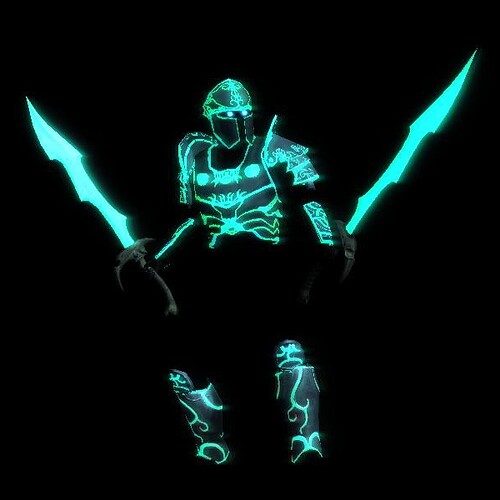 Slowly getting there. Managed to identify what helmet was used. It’s the Full Plate Helmet 4 in the toolset (nr5 in reality), so I copied P_HHM_PF_Helm05 from NWN2_Models.zip and then did this in MDBCloner: 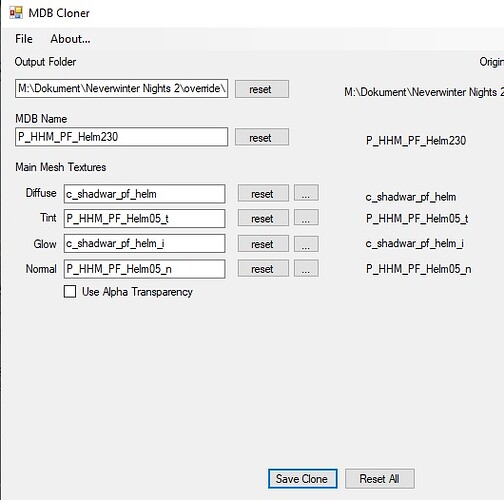 The only thing missning now are the bracers but…maybe that’s also possible to fix.

I guess so. There aren’t any bracers in the original files, but using existing ones and changing the texture (as you did for the gloves and helm) should work (hoping the UV mapping doesn’t require too much work!)

Now, after all this work I’m thinking that I’m not sure I like this one anyway. I’m trying to make some sort of odd spirit being thing. I think I would like it to float, so I thought that maybe I could mix this with Kamal’s elemental plane residents. However, when applying the fx_elem_fire_down it takes away the creature’s luminecent armor so…Ah, well…

You could use the MotB telthor spirit effects, the ones on things like badgers etc. that makes them sort of invisible and glowing. The undead drowned creatures do a good weird explosive sort of thing maybe you can just change the colour.

Thanks, @Tsongo . I have moved on from this whole idea with this creature though. I’ve got something else in mind entirely now. Happy New Year, by the way!

andgalf… A Happy New Year to you too… And all the awesome helpful people on these forums ( still the best on the web ) !