There are no shaking hands animations is there? I have looked in the Animation Viewer in the Toolset but haven’t found any. As I like animations, it would be nice if there were some greeting animation where two NPCs shake hands.

Something like this?
Same principle as for the kissing animations: you’ll need to play the animation for both characters (I assumed you’ll only need human, elf or half-elf races - and at this point it only works for males).

Thanks, 4760! At this instant I need it for both males and females though. But there’s no need for other races than the ones you mentioned.

Edit: Darn! I forgot that that in this particular scene there’s a male genasi shaking hands with a human female.

If the hhm / hhm combination is what you expected, I’ll make the hhf / hhf and hhm / hhf versions too.

Genasi use the human skeleton, so this scene shouldn’t be a problem.

As the name says

Not released, andgalf is beta testing them in his new module, and there’s still one or two I need to send him.

In my third module (A Strange World III) I use 4760’s kissing animations. If you download that one, you will find the scripts and the animations there. However, as he states he is doing some updates to those animations, with additional new ones included, so…

Of course, you’re right @andgalf. Not beta, but just half of what I wanted to do.

Edit: I’m eagerly anticipating the “full version”, so to speak. It will be really nice to have the additional ones you’ve planned!

I’ll check it out. Haven’t been playing much this year, working rather on a module so I didn’t download it yet. I enjoyed the others in the series.

There was a scaling issue in the initial animation, but it’s fixed now: 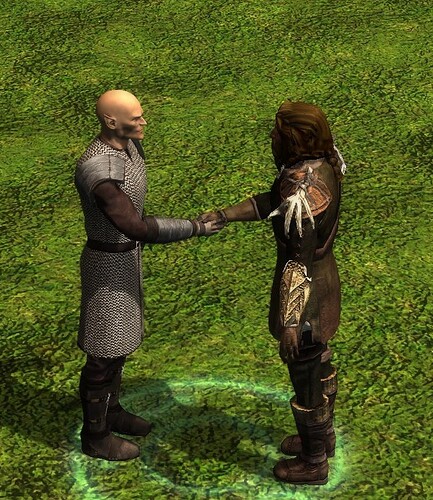 Demo module available here: https://1drv.ms/u/s!AoSIcIB3l-yHkzjmnjHwFIg-Z20M?e=mo3mQA
Two things to note first: it’s my standard test module, so it includes custom content you might not have (so, before running it, I recommend you open it in the toolset and use stock heads instead of #27 for the female and #204 for the male NPCs).
Also, it only works for the male NPC at the moment, I’ll do the female version based on the comments I get for the male version

Thank you so much, 4760! I’m truly grateful for all you’ve done for me and my modules!

Edit: I have PMd you now so we can continue the discussion there.

But can you do a handshake fake out?

Wow, you did a great job!