I found a promising mod that could remove party XP penalty for henchmens and summons https://neverwintervault.org/project/nwn1/script/party-size-penalty-manager-no-xp-loss-override

It sounds very confusing when I apply everything on value 1.0 I do get way more XP than I should I believe. If I would kill the enemy alone, I would get around 70XP and if I got party of 1henchman 1familiar and 1summon I would get 110XP for the same enemy. That means bigger party - bigger XP I get from the same enemy which it doesn’t make sense to me.

If anyone using this mod, could you help me to set up a configuration file that XP penalty would still apply for henchmens but removed for summons, dominated, familiars? Let’s say I got party of me, 2henchmen, my personal familiar, personal summon, 1 summon of henchmen and 1 summon of another henchmen so total party size = 7
But I would like to get XP as the party would be as just for 3 (me and 2 henchmens so summons won’t give party XP penalty)
Maybe kind mod’s author could help us on this to clarify @DoesntPlayAnymore

Which values should I change to 0 to reach that effect henchmen or summons? Or…? 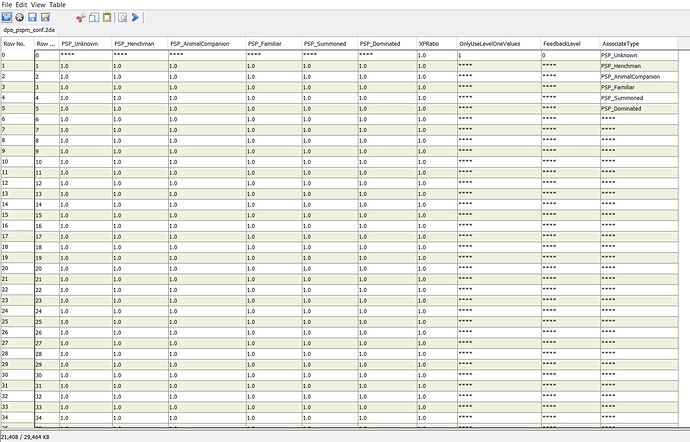 Hello, I am the author - thank you for your interest in the mod
.
I will preface by saying you should only have to set PSP_Henchman, PSP_Unknown to 0 in row 1- assuming “OnlyUseLevelOneValues” is 1.0.

There are however circumstances where this may result in too large Exp gains; namely when you are playing a caster below level 3. In this case, the Exp gain is multiplied by 1.35 if I remember correctly. This is done by the game engine to help casters out early, and not punish summon/familiar/hencman use too much for these weaker early game classes.

Also, may I ask what module you are playing this with? And what character level?

EDIT: Actually, I am curious if this fix does what you need because I am not sure how henchman summons are labeled by the engine - I will provide more support if needed.

Thank you for getting back.
If I understand correctly if I don’t want to get xp penalty from familiars,summons and dominated creatures I should leave their vertical rows for 1.0 value and if I want to keep XP penalty for having henchmans in the party I should change henchman vertical row (only first row if ''UseOnlyOneLevelValues set to 1) to 0?

If so, if I set this way

Now I should get XP of 80% by this formula https://nwn.fandom.com/wiki/Party_size_penalty
if I have in my party:
ME
1henchman
1familiar
1summon
1summon of henchman

Yes. However, since you are playing a caster level 1 - 3, you will receive increased exp. To combat this, your config file should look something like this:

Did this fix your issue? I may do some updating to the mod based on this interaction.

Awesome, it works this way.

However, I found some misunderstandings or bug?:
Gang Leader gives 600XP(100%) if I would kill him with 0 party companions
If I kill gang leader with 1 henchmen in party it gives 480XP(80%). That gains without mod.

Now if I apply value 1.0 on henchmen and turn mod on and have a party of 1 henchmen (it should count as 0party because value 1.0 shouldn’t penalise henchman) - the same leader gives me 480XP and if I set on 0 value in mod it gives me 400XP with 1 henchman in party.

And if I turn mod off havng additional 2 companions in party would give me 400XP.

So that means the mod considers myself as an additional party member while default game rules not.
Is it a feature or a bug?

That is definitely not a feature. There is probably a game script that rewards extra exp for that encounter.

There isn’t an elegant solution to this which is why aren’t many simple Exp Penalty modifiers out there - and why I wanted to make one. The only solution at the top of my head are either changing the script for that encounter directly in the module - which is too much of a hassle for me personally, or use a complete Exp overhaul system - these are available in the vault as well, but are also a hassle to implement.

However, if you are curious to what value the system uses to reward extra exp, you can set FeedBackLevel to 1 (in the config) or above and the script will log information to the console.

Thank you very much for your feedback.

There is one more XP mod penalty remover in 3.5rules mod and works exactly how described but unfortunately, I don’t want to use the whole mod as it conflicts with TonyK ai mod.

If you ever consider updating your mod in the future here is a quick tip:
save game next to the boss with companions in the party and enable DebugMode1 and mouse cursor on the enemy and press Y it kills the enemy instantly and shows how much XP is granted so it’s an easy and fast solution for testing.

Nevertheless, this mod still helps to get more pleasure playing as a summoner, good job!

Thank you for the tip.

What I wanted for this mod was a simple, general solution to an annoying problem - I’ve been annoyed by the Party Xp Penalty for 15 years! And I never found a solution that didn’t give me a headache. I realize my mod is not perfect - but perfect is cumbersome both for the author and user. This mod does provide a simple way to play the game in a way that is closer to how many of us would like to play it.

I’m sorry how Bioware implemented their Xp system. It should be so, so simple to do what we want to do but it just isn’t. And if modules decide to reward extra experience on some encounters, but not others, how should we automate that? Oh well.
I may do some adjustments to the default config file based on our interaction, but that will also add further complexity (headache) to what was supposed to be a simple fix.

Another annoyance of mine was the high exp and gold cost for crafting wands and scribing scrolls. For so many years I just never used those class features! I made a fix for that too, based on another mod. It’s called Craft Wand Improved V 2.0. Luckily, that was much simpler to implement, and I thought since you are playing a caster maybe that would have your interest.

Finally, thank you for your feedback and happy gaming.